As I do not live in an area with Costco locations, I was not aware until Doctor of Credit posted today that Costco is now accepting mobile payments in-store. I imagine those with Samsung Pay have been able to use it at Costco for quite a while since Samsung Pay works almost anywhere, but for Apple Pay and Google Pay users, this could be great news as a way to earn an effective 4.5% back at Costco via the Altitude Reserve card. This was announced a couple of weeks ago and is great news for those with the Altitude Reserve card, since that card earns 3x FlexPerks for payments made via mobile wallets like Apple Pay, Google Pay, and Samsung Pay. Those points can then be used to book travel at a rate of 1.5 cents per point. Better yet, US Bank earlier this year rolled out their Real-Time Mobile Rewards (See: US Bank makes Real-Time Mobile Rewards awesome. Are you listening Chase? Amex? Citi?). In a nutshell, Real-Time Mobile Rewards allows you to book directly with a hotel, airline, etc and redeem your points instantly via text message (note: there are some caveats and gotchas — read this resource page for more: US Bank Real-Time Mobile Rewards. What works where?). That enables you to, for example, book directly with the hotel and earn loyalty points / elite credit / access elite benefits rather than being forced to book through the bank’s portal, which likely would not give you access to those things (note that one of the aforementioned “gotchas” is that hotel redemptions must be at least $500, whereas most other purchases only need to be $10 or more – see that post linked above for more).

I suspect that Costco loyalists stand to gain quite a bit from this development as I am not aware of another card with a bonus category for Costco purchases, and 4.5% back is pretty darn good for daily essentials bought in bulk. We have also seen periodic deals for mobile payments with Chase cards – I wouldn’t be surprised if this holiday season brings some enhanced competition for various cards to become “top of app” rather than just top of wallet.

Keep in mind that Costco only accepts Visa, even via mobile payment platforms. 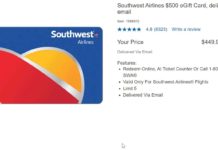 I’d take the 4.5% from AR over any other 5% ones because of the purchase protection.

Actually, you can use Mastercard and Discover cards and Visa when making an online purchase. I use the Discover card to make Costco Cash Card purchases when Discover has their 5% bonus of discount stores. If you have a card with discount store bonus, you can buy the cash card online and then use it to shop at Costco.

Don’t forget the spent app for an extra 1%. Effectively earn 5.5% at Costco now!

@Hoyasaxa
What do you mean by ‘the spent appl’ ?

I have some part-time employees that I pay via PayPal. I wonder if I got this card, linked it to my PayPal account, and used the PayPal app to pay them, would those count as mobile purchases?

I figured as much but appreciate the confirmation!

Discover card has Wholesale Clubs as 5% Category for Q4. I usually buy Costco Cash Cards online, where you can use Discover and then pay with Costco Cash Cards. It takes Costco about a week to mail them out.

Same here. It was especially nice during the first year of membership for 10% back (+ another 2% later as Costco executive member).

A word of warning, don’t wait until two days before the end of the quarter to order. I did that in Q4 and then Costco didn’t ship for a week. The result is the charge posted in the next quarter and I only got 1% instead of 5%.

I use this card at Costco for more than a year. My store enabled NFC payments almost a year ago. This card is the best for Costco in-store and also for gas, but there is a better card – AT&T Access More. You can buy Costco Cash cards online, and then use them in a store or for gas.

I always wondered why the B of A cash rewards MasterCard had warehouse stores as a 3.5% category when Costco only takes visa. One of the reasons I never got the card.

Mine is a Visa. You could probably request a switch and use it at Costco, which I do.

I believe you can purchase a Costco cash card (Costco’s version of a gift card) online with that MasterCard. Earlier this year, Discover was offering 5% back on warehouse store purchases so I used the card to buy $1.5k worth of Costco cash cards (3x$500) and used them like cash at Costco. Discover gave me $75.