Dollar General is offering 15% off many kinds of gift cards purchased on 12/10/21 only. This can be a good way to lock in a discount or pick up some easy credit card spend.

I doubt Lowe’s is included in this deal since it isn’t pictured (Dollar General recently offered 15% off on Lowe’s cards on Thanksgiving Day but for one day only and it was specifically advertised). A commenter at GC Galore indicates that the discount doesn’t work on Nike, Home Depot, or Dick’s and I see another commenter at Doctor of Credit saying that the 15% off doesn’t apply to Lowe’s, though I haven’t gone to a store to try any of these. Still, the 15% discount can be good enough even just on some of the brands pictured to make them attractive whether for personal use or potentially for resale depending on your resale relationships.

Note that some stores are probably debit or cash only. I’ve used a credit card to buy gift cards at a number of Dollar General stores before (including over the Thanksgiving / Black Friday weekend a couple of weeks ago), so that isn’t a blanket corporate policy. Limits will also vary by store.

Note that the ad says in-store and online, but I don’t think Dollar General sells gift cards online, so I think you have to go in-store for this deal. 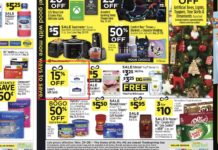 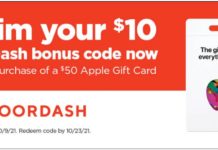 I was able to use a CC on Playstation GC today. No signage in store but my receipt showed 15% off.

I stopped today and was told it was only the ones pictured. YMMV