Recently, each of the domestic US airlines has announced that they are eliminating change fees.  That’s awesome.  But the details can be hard to remember.  Which fare classes apply?  Do we keep the fare difference if the new flight is cheaper?  Are standby fees eliminated too?  What’s happening with award change fees?  The answer to each of these questions differs by airline.  This post offers a few quick reference tables to answer those questions. Airlines are waiving all fees (including basic economy tickets) for tickets issued during the pandemic.  The end date for this policy varies by airline:

Here are the situations in which change fees are permanently waived post-pandemic:

Here are the situations in which award change fees are permanently waived post-pandemic:

So far, only AA and United have announced the elimination of same day change fees.  I’ve left cells blank where no announcement has been made:

All all ticket vouchers expiring in 2021 and vouchers from all new tickets purchased in 2021 will expire on December 31, 2022.  Details here. 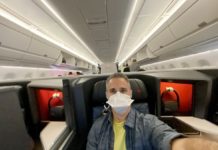 Delta Companion Certificates No Longer Usable For Delta One Flights