Rakuten has boosted the rate it’s offering at a number of retailers when clicking through from their app to 12% cashback/12x Membership Rewards. That includes some popular retailers like GameStop, Ulta Beauty and H&M, but perhaps the most notable is Dell. This 12%/12x promotion is listed as being a rate only available in the Rakuten app, but for Dell as least that rate is showing for me on their website too.

It’s Dell that’s likely the most interesting of all the retailers for many readers too. That’s because the Amex Business Platinum card comes with twice-annual $200 credits for Dell, one that’s good for redemption January-June and the other from July-December. We’re coming up to the end of the year and there’s likely a lot of people yet to redeem those credits, so earning 12%/12x on those purchases is a fantastic rate.

Note that Rakuten often boosts the rate it offers on their site and/or app at this time of the year for Black Friday, Cyber Monday, etc. We sometimes see rates go as high as 15%/15x and I certainly wouldn’t be surprised to see that in the coming week either. However, there’s no guarantee that rates will be increased that high, nor that Dell would be an eligible retailer even if they were. As a result, if you want/need to make any purchases at Dell or any of the other retailers currently boosted to 15%/15x, you might want to follow the advice of that well-known proverb that says “A duodecuple in the hand is worth a quindecuple in the bush”. 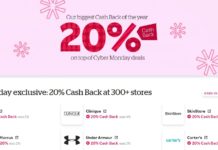 I think I see gift cards are excluded?
https://www.rakuten.com/delltechnologies.com

Looks like other portals are joining in too, TopCashback has 13% on Dell and 12% on some Walmart items right now.