Aer Lingus is running a promotion right now where you can earn 15,000-18,000 Avios when subscribing to The Economist. Note that this isn’t one of those “Earn x miles for a $1 free trial” type of deals – this is for a full paid subscription.

It’s a pretty rewarding deal though, especially if you know that you’ll be able to put the Avios to good use in the future.

This offer makes the most sense if you’re actually interested in a subscription to The Economist as it seems to be the most rewarding deal I can find when paying for an annual subscription. It looks like this is the standard pricing for a subscription, so the price hasn’t been bumped up to account for the Avios.

If you can make good use of the Avios though, it could make sense even if you’re not particularly interested in a subscription to the magazine. That’s because you’re effectively paying 1.25cpp-1.26cpp depending on which subscription you take out. While that’s not an incredibly cheap price for Avios, you can certainly get more value than that during normal times.

For example, you can fly round trip on some American Airlines flights for only 11,000 Avios, or for 13,000 Avios you can fly one-way from the west coast to Alaska or one-way from Montreal to Dublin. Here’s a list of some other Avios sweet spots.

(EXPIRED) Iberia Plus: 50% bonus when you buy Avios 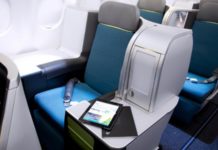 Rakuten is 40x several times per year, so that is perhaps the best option with MR earning when it comes along.

I listen to their (free) podcast, its pretty good!

My Avios account is with BA – can you transfer these to BA?

Yes, you can transfer Avios between BA, Iberia and Aer Lingus – here’s how to do that: https://frequentmiler.com/complete-guide-to-avios-british-airways-iberia-and-aer-lingus/#Combine_Avios_across_programs_(e_g_move_points_from_Iberia_to_BA)