I’ve long said that the Southwest Priority card is the card to have for Southwest loyalists. The card is an easy win if you fly Southwest regularly since it comes with 7,500 points (easily worth $100+ toward flights) plus an annual $75 Southwest credit. That makes the card a net win against its $149 annual fee even before you consider that it comes with reimbursements for A1-A15 boarding 4 times per year (and we’ve paid sticker price for that at times in the past). Here are the full card benefits:

Since the card came out, I knew it was a fit for my family. The only reason we hadn’t yet gotten it was timing.

When the Southwest Priority card launched in 2018, we were in the first year of a 2-year Companion Pass from the two cards my wife had gotten in late 2017, so the timing wasn’t right to apply new or upgrade. Then we became eligible to upgrade in mid 2019 but thought we might wait until 2020 and open it anew for a 2020-2021 Companion Pass. However, we were fortunate enough to earn a Companion Pass in early 2020 mostly through referral bonuses and then the pandemic hit, so we just hadn’t made a move on replacing the Premier card with the Priority card.

However, now that we are once again thinking about air travel, I was glad to see this upgrade offer. The Priority card just makes more sense for regular Southwest flyers and our domestic trips as a family are almost always on Southwest (and newly added routes make Southwest an even more convenient choice for the domestic destinations to which we travel most often). While 5,000 points is a tiny upgrade offer compared to Amex upgrade offers, the Priority card is an easy win for us with or without an upgrade offer, so we’ll probably take the 5,000 points and run (though since the fine print says that she has until 8/31/21 to accept the upgrade offer and make a purchase, perhaps there is some wisdom in waiting to see if a better offer comes around). Note one key from the terms — benefits like the upgraded A1-A15 boarding positions and the $75 annual Southwest travel credit are based on anniversary date and that anniversary date with begin with the day the upgrade is officially processed:

One potential concern here is that I’m not sure if accepting the upgrade bonus will count as having earned a “new cardmember bonus”. New Southwest consumer card bonuses are not available to those who have received a new cardmember bonus on any consumer Southwest card within the previous 24 months. My wife is more than 24 months out from her previous Southwest credit card bonus, so she would be eligible to apply new for a Southwest Priority card right now but would rather not tie up a 5/24 slot. If the situation changes and she decides she wants to apply for a new Southwest consumer card, will accepting this upgrade offer prevent her from being eligible for a Southwest consumer bonus for 24 months? I’m not positive.

It is also worth noting that people who primarily value the Companion Pass likely focus on earning new card bonuses every 24 months and might not be particularly interested in this offer (and since the Priority card debuted in 2018, I’m betting that many of those who have gone after a Companion Pass with 1 personal and 1 business credit card have chosen the Priority as the consumer card component).

I actually think that this upgrade offer is a particularly good fit for people who fly Southwest frequently but do not value a Companion Pass. That’s because those who want the Companion Pass will likely want to focus on getting those new card bonuses rather than worrying about an upgrade offer on an account they aren’t keeping long-term anyway. However, a lone wolf who travels without a companion would likely find the Priority card a much better long-term value because of the ongoing benefits mentioned above, so upgrading a Premier they’ve held for a while might make more sense than tying up a 5/24 slot for a new Priority card. My situation runs counter to the norm; while I highly value a Companion Pass, there is a good chance that I can get close to earning it via referral bonuses and therefore hopefully I won’t need to tie up a 5/24 slot with a new consumer account. Because of my ability to generate points via referrals, I intend for us to keep a Southwest card in our Chase portfolio long-term, so moving up to the Priority card makes sense. Getting extra points to do so is icing on the cake.

If you’re a Southwest Premier or Plus cardholder and you’ve been interested in product changing to the Priority card, keep an eye out for an email with the subject line: “Please open: [Name], you’ve been selected to upgrade and earn 5,000 bonus points.” 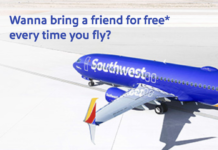 Can you provide the link?

I upgraded at the end of last year as my Premier was coming due (no points upgrade tho). I’m not that interested in the companion pass so it made sense to me. Chase had a nice credit for me earlier this year which helped with most of the fee.

I’d think taking this offer would kill your chances of getting the regular sign-up bonus for the Southwest or IHG cards. It doesn’t seem like a smart move to me.