Star MegaDO 6 took place May 9-13. It was an opportunity for aviation geeks to get together and geek out about all things aviation related.  The “Star” part of the title indicates that this was not just for your average everyday aviation geeks, but specifically for those excited about Star Alliance carriers.  Since I’m neither an aviation geek nor a Star Alliance fan (not that there’s anything wrong with being one), I didn’t attend Star MegaDO 6.  Plus, I had other plans for the exact same dates, May 9-13…

This past weekend, my family flew to London.  There, my wife and I celebrated our 20th anniversary, along with our son (he loves London so we let him skip a few days of school), and my mom (the weekend did span Mother’s Day, after all), and my niece (this was her first chance to venture outside of North America).

We stayed at the Radisson Blu Edwardian Bloomsbury Street where we had occasion to use up several of our Club Carlson Bonus Award Nights.  While booking the hotel, I noticed a small coincidence. The hotel’s street number (9-13 Bloomsbury Street) matched exactly the dates of our stay (May 9-13).

We booked three rooms.  While we used points wherever possible, one room was a paid stay in which we used the Citi Prestige 4th night free benefit.  You might recall that I wrote about this booking before (see: Prestige 4th night free benefit, take 2).  In that post, I mentioned that the fourth night of our stay was conveniently more expensive than the prior nights.  That was a good thing since the 4th night would be reimbursed by Citibank.  At the time, I didn’t know why a Tuesday night stay would be so popular in Bloomsbury.  By the end of the stay, I found out.  I’ll get back to that…

The stay itself was remarkably nice – especially since we were plagued with one problem after another at the hotel.  The worst was when the hotel checked a couple into my son’s room at 2 in the morning.  The other problems were minor, but frustrating: room keys stopped working each day, housekeeping forgot to clean our room, the room safe failed to open, etc.  Despite all that, I somehow liked the stay at this hotel.  Anyway, this is not meant to be a hotel review. Moving on…

Before traveling, especially out of the country, I make a point of stocking my wallet with the right credit cards.  I tend to have a lot of cards, so it can be a challenge to keep my wallet slim and make sure that the right cards are with me at any given time.  Admittedly, I often get it wrong.  On a prior trip, I remember making a small mistake: I had stocked my wallet only with cards needed overseas.  I hadn’t thought about purchases I might make at the airport on either end of the trip.  So, this time, I kept my Citi Forward card in my wallet despite the fact that it would incur foreign transaction fees if I used the card outside of the United States.  I didn’t intend to use it outside of the US.  I kept it in my wallet to use for airport parking, restaurants, etc. within the U.S.

The Forward card, sadly, is no longer available to new applicants.  For those grandfathered in, though, it’s a treasure trove.  It offers 5 ThankYou points per dollar for restaurants, books (including Amazon.com purchases), movies, and miscellaneous other entertainment related venues.  And, when paired with a Citi Prestige card, the points earned from the Forward card can offer 1.6 cents per point value when used to purchase airfare on American Airlines (see: A great combination: American Airlines status plus Citi Prestige).

As I ate that slice of pizza, I realized something… it might be worth using my Forward card in the U.K. despite foreign transaction fees.  I checked the foreign transaction fee rate: 3%. Ouch.  Normally I would bend over backwards to avoid a fee that high.  In this case, though, I realized that it would be worth it.  At restaurants, in the UK, I could go with my original plan and use my Prestige card with no foreign transaction fee whereupon I would earn 2 points per dollar.  Or,  I could use my Forward card, pay 3 cents per dollar, and earn 7 points per dollar. Compared to the Prestige card option, it would cost me 3 cents per dollar to earn an extra 5 points per dollar.  In other words, this was an opportunity to buy Citi ThankYou points for .6 cents each.  Given that I can later use those points for 1.6 cents per dollar towards AA airfare, that’s akin to buying AA gift certificates at a 62.5% discount.  Points are better than AA gift certificates, though, because they leave open other options such as transferring to airline programs and… (that’s the only other good use I can think of, but still it’s good to have that flexibility).

In London, the vast majority of my purchases were at restaurants.  And, therefore, I used my Forward card more than any other.  I used my Prestige card for hotel expenses (3X), and my Arrival Plus card for a few miscellaneous other things (2X).  I did make some mistakes though.  A couple of restaurants were attached to hotels.  Upon reviewing my online pending transactions, I now see that these coded as hotel purchases, not restaurant purchases.  Usually, the opposite is true within the U.S.  Anyway, in those cases, I will earn the same 3 points per dollar I would have earned with my Prestige card, but will have to pay 3% on top.  Oops!

On the last night of our stay, I printed our return flight boarding passes in a computer alcove near the hotel’s lobby.  There was a lot of noise in the lobby at the time.  Apparently some sort of conference or meeting had just let out.  People had clearly been drinking, and I overheard some of the participants discussing their own journey to come the next day.  It occurred to me that the crowd seemed just like the usual crowds at frequent flyer events.  I decided that drinking and discussing travel are common activities across the globe.

Next, as I waited for the elevator to return to my room, I was startled when people I knew stepped off.  It turned out that the Radisson Blu Edwardian Bloomsbury Street was the last hotel stop on the Star Mega DO tour!  Suddenly I knew why the last night of our stay was more expensive than the others.  The MegaDO crew had conveniently booked up most of the other rooms! 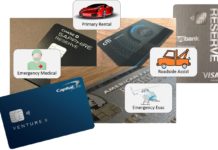 I just deliberately paid foreign transaction fees by using my Club Carlson card to pay for a stay at a Radisson Blu in Europe. This triggered posting of the 30,000 point bonus in May, while I can still use it to help pay for a 50,000 point bonus award night booking in London. An excellent trade-off – paying $5 to unlock hundreds of dollars in value.

I thought about doing that too, but forgot to bring my CC cards!

Where do the FTFs post for the forward? I used it a lot in Spain, paid in Euros and didn’t see any fees explicitly listed on my statement. Do they get added into the conversion rate or what?

It posted all at once as a single line on my statement:
FOREIGN TRANSACTION FEE

It’s often a bit of a risk to do this because you never know till after the fact if the purchase will code as a restaurant correctly. Even in the US its a bit of risk, but I find overseas tend to be mis-categorized more.

Ever try calling your credit card company and asking for reduced foreign transaction fee or points/dollar reimbursement for overseas spending?

I haven’t, but I’d be curious to hear if they offer you anything……

Thanks. I did call Citi from the Detroit airport to ask them if it was possible to waive the foreign transaction fee for this trip, but they said they couldn’t.

I understand that GBP/USD conversion was not a factor in your decision because you were going to pay it independently from the card, but FX conversion can be a fairly expensive “hidden” fee (ie. foreign transactions tend to be converted at outrageously off-market rates).
Is there an issuer that tends to have better treatment of foreign transactions or are they all approximately the same?

Good question, but I haven’t looked into that at all.

Happy 20th Wedding Anniversary! Congratulations to both of You

Regarding using a 5x (or more) card for international use, I’ve been wondering about that as well. I’m going to Bora Bora and Japan in late June, and I’m seriously considering using my freedom 5X card for restaurants. Sure, I will be charged 3%. But that is still a minimum of 3 UR profit and really a little more than that because the three UR more than cancel out the 3%.