As Doctor of Credit points out, there has additionally been a key change to the wording of card benefits that may have a negative effect on those in the first year. News broke earlier this month that beginning on March 14, 2019, card holders would only cash back on the first $10,000 in purchases per month. This is how that showed up on the Alliant page a couple of weeks ago: The distinct difference is that it now says that maximum cash back earnings will be $250 per billing cycle. It’s unclear whether this means that those in the first year will still earn 3% on up to $10,000 in qualifying purchases or whether they will also be limited to earning $250 in cash back per cycle (which means a cap of $8,333.33 in purchases per billing cycle if you’re earning 3% back).

Either way, we’ve noted that this development is a negative, especially when taking in context with the increase in the annual fee last year. At this point, the card only makes sense if you spend between $20K-$120K per year and never exceed $10K in purchases per billing cycle. Here’s the math on why:

While I still have the Alliant card and use it for north of $20K per year in purchases, I’m questioning whether or not it is worth it long term. One big purchase that goes over the monthly cap and earns no rewards on some portion of the purchase would leave me pretty dissatisfied. I will probably take an eye toward the Bank of America Premium Rewards card with Platinum Honors in 2021 for an “everywhere else” card. Alliant looks to reclaim the throne as cash back king 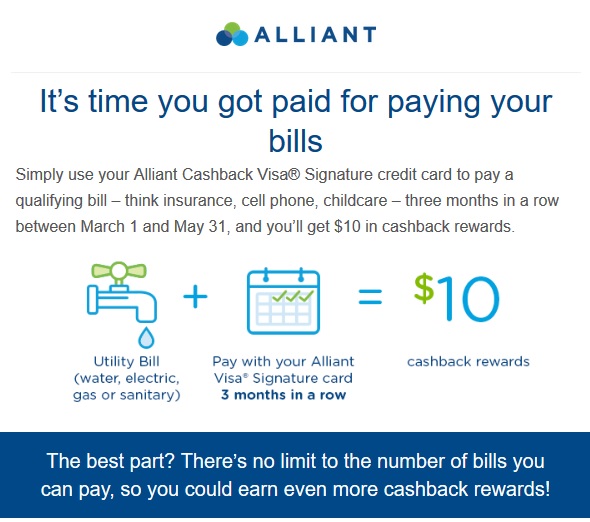 (EXPIRED) Alliant promo: get $10 for each bill you pay for 3 consecutive months [Targeted?] Are cash back cards the new airline cards?

So, does this cap apply to current cardholders, or only new ones?

The cap on cash back earning? We assume all cardholders starting on March 14th.

Just checked my cashback amount. I have been a card holder for over 2 years, and was capped at the $250.00