American Airlines and IHG Rewards Club have teamed up to offer up to 8 AAdvantage miles per dollar on stays at IHG properties.

If you’re sitting on a stash of IHG Rewards Club points and need more AAdvantage miles, this promotion is worth considering. It could also make sense in some other scenarios.

When choosing to earn American Airlines miles instead of IHG Rewards Club points on IHG hotel stays, you ordinarily earn 2 miles per dollar at most IHG properties. The two exceptions are Staybridge Suites and Candlewood Suites where you earn 1 mile per dollar.

6-8 miles per dollar is a pretty good return for hotel stays; whether that’s worth it will depend on your valuations of AAdvantage miles and IHG Rewards Club points, as well as whether you have status with IHG.

For example, someone with no IHG status (i.e. Club members) earns 10 points per dollar spent on IHG stays (5 at Staybridge Suites & Candlewood Suites). With a Reasonable Redemption Value (RRV) of 0.57cpp (cents per point), that works out at a 5.7% return. If they credited those stays to American Airlines, they’d instead earn 6 miles per dollar in most cases. With a RRV of 1.4cpp for AAdvantage miles, that works out at an 8.4% return – almost 50% more.

Many of us have an IHG Rewards Club credit card which comes with Platinum status. Platinum members receive a 50% bonus on base points, so that comes to 15 points per dollar. With that RRV of 0.57cpp, you’d get an 8.55% return – pretty much the same value as the 8.4% for crediting to American Airlines. In this scenario, the best option would depend on whether you need points or miles more.

For anyone with Spire Elite status, the value proposition tips towards still crediting to your IHG Rewards Club account. You get a 100% bonus on base points with Spire Elite, so that’s 20 points per dollar at most IHG brands. Still using that RRV of 0.57cpp, you’d get an 11.4% return for each dollar spent. That’s much better than crediting to American Airlines (at 8.4%) unless you have a stay booked at a Crowne Plaza property. With 8 miles per dollar on offer there, the return would be 11.2% for crediting to American Airlines based on the 1.4cpp RRV for AAdvantage miles.

The nice thing is that you can choose to earn 3x / 4x miles with American Airlines during this promotion period while simultaneously earning IHG Rewards Club bonus points when completing your Q2 Accelerate tasks.

Ultimately, you’ll need to do the math for yourself to work out if this makes sense for you, but it’s definitely a promotion worth considering if you have upcoming IHG stays. 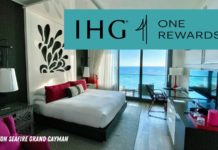 Do you get these points on paid stays? You mention “if you’re sitting on a pile of IHG points” so does this mean IHG award stays could get this redemption?

Yes, these are for paid stays. I’d mentioned about sitting on a pile of IHG points because people who have loads of those might prefer to earn AA miles instead.

Ah Just wanted to make sure. Thanks for the article and the reply.

Will this work for a stay at Venetian/Palazzo in LV?

It should do as you’d normally earn IHG Rewards Club points on those stays.

So does “Triple miles will be awarded on all Qualifying Stays after completing 1st Qualifying Stay between May 15, 2018 and July 31, 2018” mean you will get miles starting on the first stay or starting on the second stay? And the terms and conditions page mentions that you must register in advance but it does not say in advance of what. Of booking or of stay? As usual, interesting and possibly worthwhile promo made unnecessarily vague and complicated courtesy of our friends at IHG…

Yep, it’s definitely not the clearest wording they could’ve used. I take it to mean you’ll get miles on the first stay, especially with the wording below that’s found on the landing page (my bolding).

Let’s get you ready to start earning 3x American Airlines AAdvantage® miles* every time you stay with us between May 15 – July 31, 2018.

As for registering in advance, I believe that it’s in advance of your stay rather than when you book.