In case there was any doubt, let me be clear from the start: 99% of this post is wishful thinking…

Given that Chase is currently offering 80,000 point signup bonuses for both their personal and business Marriott cards, and in light of the news that SPG points are now transferable to Virgin America, I thought it would be fun to play “what if…”

Now that Marriott’s buyout of Starwood appears to be going forward, some opportunities are likely to arise.  First, I think it is a given that Marriott will merge the Marriott Rewards and SPG programs in the future, or they’ll create a single brand new program.  Either way, I think it’s safe to say that we have at least 18 months before that happens.  In the meantime, Marriott will probably try to find ways to give Marriott Rewards members the ability to book Starwood free nights; and to give SPG members the ability to book Marriott free nights.

One way to accomplish that is to allow members to transfer points back and forth.  This isn’t an unheard of solution.  Delta and Northwest allowed this while they merged.  So did United and Continental.

If Marriott decides to take this approach, they’ll have to pick a transfer ratio.  It’s generally accepted that SPG points are considerably more valuable than Marriott Rewards points, but the exact ratio is debatable.  One could argue that the transfer ratio of SPG to Marriott should be 1 to 1, or 1 to 5, or anything in between.  I’ll go out on a limb and say that I think that a 1 to 2 ratio is likely.  If Marriott allows points to be moved back and forth, I expect 1 SPG point to equal 2 Marriott Rewards points.

In the post “How to play the Alaska / Virgin America deal,” I argued that it was likely that Alaska’s buyout of Virgin America would eventually lead to Virgin America Elevate points getting converted to Alaska miles at a 1 to 2 ratio.  My argument was based on two distinct observations:

The news that SPG points now transfer 1 to 1 to Virgin America severely undermines my suggestion that points will eventually be converted to Alaska 1 to 2.  While the purchase prices of miles still supports the suggestion, I no longer think this scenario is likely.

How likely is each of the above?

Here are my out of the blue guesses of the probabilities of each of the above puzzle pieces:

When combined, those guesses lead us to a meager 1.25% chance that the overall conversion will work. Those aren’t good odds, but it’s fun to imagine the possibilities! 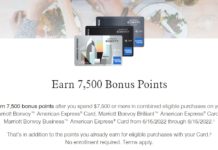 Not sure about the content of this article. I have second thoughts but I’m still a frequent reader here.

@ frank and others — Why do you bother reading any of the bloggers? Why not go it alone and figure it out yourselves??

Only if… thank you for the thought exercise. Keep on being creative!

The most stupid article ever. F wasting my 4 mins

I think the the whiners comments show how little they understand the thought process of war gaming the potential strategic moves that come on the heels of two important mergers. That’s the kind of intellectual out load thinking I expect. My only question is why do you have VA to AS at 1 to 2 at only 5%? If that doesn’t happen it seems VA customers will be highly ticked which is not the way Alaska wants to start the merger. More likely all those happen and then 100% chance they follow AA degrade timeline.

Relax everyone – fun to dream!

@Saif, @hobo, @Dave, @Sam: Thanks for seeing the post in the fun light that was intended.

@Raj: I happen to really enjoy thinking up and writing these types of “what if” posts. So, as long as I enjoy doing so, I’ll keep writing them.

@billy d: I would LOVE it if Marriott went with 3:1, 4:1, or 5:1 because that would mean that SPG points would transfer to Marriott at a favorable rate. But, as much as I’d love for them to do that, I think it is much more likely that they’ll go with an unfavorable (to SPG members) 2:1 (2 SPG to 1 Marriott).

The “buy” and “sell” rates for the point conversions Marriott allows now are vastly different. So there’s little reason to assume that MAR-SPG rate will be the same in either direction.

correct. no reason to think it will be an equal transfer in both directions. could easily be 4:1 Marriott -> SPG and 1:1 SPG -> Marriott (or 1:2 maybe, but not likely)

That’s a good point. I agree that’s more likely. Marriott could simply add SPG to the list of airlines where you can convert 70K marriott to 25K miles.

I agree with the other comments. This was not only a misleading title (even after reading the article I don’t understand what 1.3% guaranteed means when it’s just your arbitrary probabilities), but also fluff that provided no value. I understand there’s very little interesting public information these days, but why not just say “no post today” if you really have nothing to write? You’ve had tons of repetitive posts with the same ideas of hypothetical happenings. If all of the interesting info is underground, then perhaps you’d be better off quietly making money pursuing those than writing this (perhaps without the incumbent tax benefits of owning a “blog”).

These comments are ridiculous. How about you start paying for content that gets you upgraded and allows travel around the world–and then feel free to comment when it doesn’t satisfy you. FM doesn’t write for you–and if you clicked–you did it because you thought you were going to get some info to benefit yourself for free.

@sam wallace we the readers are paying for the content in a way. When clicking on the story we are shown advertisements which in turn pay FM so in a way yes I am paying for the content.FM is not doing this for free, he has a financial stake in me clicking on his stories. If I click on the story I know that I will see advertisement and I’m ok with that as long as I’m reading useful information. if I click on story because of title and then the title turns out to b misleading then I think I have a legit reason to complain since money is being made off me. Hope u learned something Sammy boy.

It’s still free to you. FM might get paid a little but it’s actually still free for you.

No, not free. Cost me my time. Time is money. Understand?

That was a fun thought experiment. Now can we do the same thing with Hilton to southwest?

Not your best post. This one falls more in the line of “If a bullfrog had wings it wouldn’t be bumpin its butt”. Just too many “If’s” above.

I personally enjoyed this post very much. Although, more for the entertainment value, I liked taking a break from the repetitive information posted on each blog website and obtain a different (and fun) perspective on our collective hobbies. I didn’t find the title misleading at all and the preview on the boardingarea.com website eliminated all qualms if I had any.

Hey, man’s gotta shill those credit card links. I’m just surprised he’s not using this ONE WEIRD TRICK, because you won’t believe what happens next!

jesus christ, people need to take a chill pill. It’s just a fun post. You’re not paying for a subscription of the financial times

Agree. Actually, goes beyond Alaska miles. Better odds of 80K Marriott to 50K of any miles supported by SPG

Both the title of this post (“1.3% guaranteed”) and the first sentence make it extremely clear how unlikely this is.

1.3% guaranteed sounds like an ms scenario. I cannot believe you are wasting everyones time now.

That has to be one of the most misleading titles I’ve ever seen anywhere.

Wow. Very misleading post. And oh so stupid to assume so much when you know nothing

It just may work, but then at the end Alaska will just devalue their remaining useful partner awards with no notice, making this a wash.