UPDATE: This round may be limited to people who somehow opened a new card on March 4th after having their old card frozen.  See post comments for details.

Amex has again sent out emails to Bluebird and Serve cardholders to let them know that their accounts are essentially frozen.  The emails read, in part:

…we have observed unusual usage patterns on your Bluebird [or Serve] Account. Because of this, effective immediately, you will no longer be able to add money to your Account. 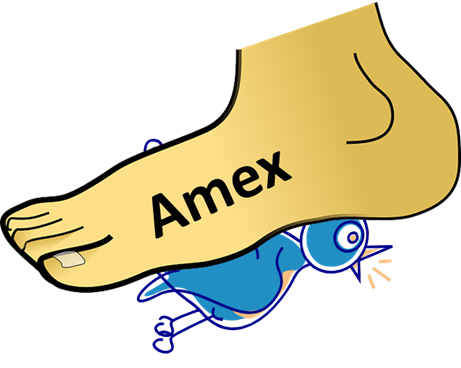 Many people who had their accounts frozen did not receive emails.  The only way to know if this has happened to you is to try reloading your card.  If it doesn’t work, there’s a good chance that your account is frozen.

In the last wave of attacks, I speculated that Amex’s pattern was to freeze accounts every two months, or 9 weeks.  I wrote:

Clearly, I was completely wrong.  The latest batch of emails went out today (March 29th).  This was only 25 days after the last round.  So much for the idea of closing accounts before each shut down and reopening them after.  That’s not going to work. Why I’m keeping the Amex Gold another year Hello, just getting into the game, and first of all, wanted to say a BIG THANKS for this wealth of info all in one place. Seriously thanks so much!!

I was wondering if:
1) If I load with an Amex, will I be charged a cash advance fee?
2) I have read that I will not get the membership rewards points but that it will count towards minimum spend. Is this accurate? THANKS SO MUCH.

Thanks for the positive feedback.
1) No, it’s safe
2) That’s exactly right. You won’t earn points or miles but it will count towards meeting minimum spend requirements.

I called Serve today and I asked if the block on adding money would affect refunds or billpay reversals and , after submitting the question to a manager, the answer is no, the block only affects the ability to load using cash or debit on my end.

Something somewhat strange Happened . In Jan5 I used my friends Serve card to billpay my Ink Account for 4,999.99 . It was accepted and no problem. Last 5/20 chase reversed the money and hit me with late fees for $470. Apparently the reversal of that payment had a retroactive effect and, since I was considered in default even if my statement shows No Payment Due. They closed my account and my UR points were also blocked.
After many calls, they reactivated the account. The reversal of the payment that was initiated on 5/20, still doesn’t show in my friends serve account. I called Serve today and explained to the rep and , since I have not cancelled any account, he said he doesn’t see any block on it.
I have several concerns
Is the block on loading Serve still active? he couldn’t see it on his screen?
If the block on loading serve is still active, would that block a reversed billpay ?
Will chase go around all my accounts looking for large payments initiated from accounts that are not under my name ?(according to what they told me was that the “concern” was taht the payment was very large and it came from an account that I never authorized.)
In order to be spared from the fees, I have to fax or mail 2 letters, one from me and one from my friend, notarized, explaining That transaction was initiated by us and was not an error.

Oh boy. What a mess. On another thread a reader suggested better luck getting help from Amex through their Facebook Page. I’m dubious about that, but worth a shot.

Yes, seems possible to me that a block on loads would stop the reverse billpay.

So. Where would the money go? Should chase or amex be the one to contaxt to trace it?

My wife bought a Serve card for the first time at CVS. After online registration, her account was shutdown for violating 15D before her permanent card arrived in the mail. The pattern of “suspicious activity” that violated 15D could legally only be attributed to the purchase of the Serve card. Of course it is actually likely a case of guilt by association and Serve storing dossiers on its customers, practices considered so heinous even the FBI has been required to provide individuals access to their personal files.

Maybe they can see into the future and know how your wife was going to use the card if they didn’t put a stop to it first.

Yeah, Serve pre-crimes division… judging the customer service and account protection service, I am giving them way too much credit for the level of sophistication required. It must be something more simple like Serve does a soft pull, finds a recent credit card approval for one or more of certain products, and so shuts down the account.

Does anybody have a credit report that shows Serve soft pulls? How many? How often?

received the shut down email this morning on my long standing Serve account, was able to load and make payments yesterday.

FYI. There are many reports of a new wave of account freezes today. So we now have seen freezes on the following dates:
January 8th
March 4th
March 29th
April 12

I got the letter today

“This round may be limited to people who somehow opened a new card on March 4th after having their old card frozen.”

Wrong. I opened my account in January. If you read 22d all the way through, they can close your account for anything that is convenient to them. My “sin” was probably inactivity.

FM: Please stop with your “predictions.” Like everyone else, you are usually wrong.

I find it comical that you follow a blog writer who you think is usually wrong. Doesn’t that just make you look foolish?

@SDO
I think that poster meant that only FM’s predictions are wrong. His other stuff is still worthy.

My BB account was shut down in the first wave. I opened a Serve account in February and then did a single load to it before being shut down yesterday.

No big deal, I wasn’t expecting much anyway from that card, given that Amex is now explicitly anti-MS. I’m glad I found other ways to exchange the GCs for cash.

Also, as a side note, the local avenues for MS-ing are closing down quickly. Recently, the major grocery store switched to cash only for GCs. And the 0.5k GCs have magically disappeared from the shelves of their competitor.

You seem like a smart guy, but I bet you were not very good in math. I’m surprised no one told you that in order to predict a numerical pattern or sequence, it requires at least THREE data points or numbers. Anyone with average math skills knows this. Apparently, your readers failed math as well.

I’m impressed that you were able to take a single data point and predict my math skills.

lol, nice comeback, but why are you feeding the trolls?

I know, I know. I just couldn’t help myself. No more feeding them in the future. I promise.

I gotta agree with the troll, you do need at least three data points. Just admit you were wrong and move on. You’re only making yourself look bad.

I would love to add to the dat points here but as I always load my 5k XX on the first couple of days in the month I have no idea if my card can be loaded today as I was maxed out way long time along this month……..for those waiting and giving info today I would question your logic of waiting until the end of the month to do your dirty bidness……..what the hell are you waiting for? I vote that anyone who waits until after the 5th of the month is given a MS mandatory review and sent to the economy section of the plane…………..

As a data point, I had voluntarily closed bluebird (no problem shutdown/killfunding letter) and then re-opened a serve card two months later (after 3/4) and was still shutdown today, so perhaps today’s shutdown impacted anyone that had any account previously regardless if they were shutdown before or not…

One of my cards got shut down even before it was activated!!

Got the email and it falls under the stipulations mentioned. Was able to re-register for a One Vip Serve card for my wife and loaded it over the last month. Timing sucks since i was literally heading to wlmart during lunch to load $1200 in GC before the end of the month.

It seems this wave only applies to the people who reopen the seve/bulebird after being banned by AMEX. Three interesting data point

My guess is they begin to kill the people who reopen it according to their SSN but not the pattern of loading and unloading.

This round appears to be people that were previously shutdown that were able to reopen cards.

Nope. I’ve had my card for over a year, First card and loading was shut down. I have a mortgage pmt due this week. I am really pissed off about this.

I must still be ok because I literally just walked out of the store from loading my serve with gc.