Due to COVID-19, many travel companies stopped offering affiliate commissions in March and April which meant it was also no longer possible to earn cashback for those brands when clicking through from shopping portals.

Marriott was one such company that disappeared from most portals for a while, but they’ve now returned to many cashback and airline portals. This change has come about a month or two too late for me as I’m currently on a month-long paid stay at a Residence Inn. At the time I booked, Simply Best Coupons was one of the few portals that still claimed to be offering cashback, so I clicked through from them just in case the 3% cashback tracked, but assumed they’d simply not updated their site after Marriott previously announced that they were pausing their affiliate program. My assumption seemed to be correct as the transaction never tracked which is a shame as it means we’ll be missing out on ~$75 cashback, but it’s not surprising given that Marriott wasn’t actually offering commission at the time.

The highest rates are currently 5%/2x, although we’ve seen rates as high as 12%/10x in the last couple of years, so hopefully we’ll see those occasional high rates return in the coming weeks and months. 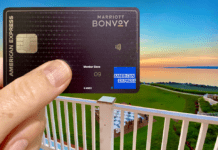 […] Bonvoy credit card so that you can receive increased rewards and $50 back. Keep in mind that Marriott has also returned to shopping portals. I often find that readers have the misconception that you need to book an advance purchase rate in […]

Do you have to book pre-paid rates or can this be for any advertised rate?

Refundable rates are fine too. There might be some special rate codes that don’t work, but it doesn’t have to be prepaid rates.

[…] Marriott has returned to many shopping portals […]

A month in a single place? That’s a big change. Hopefully it’s at least an interesting area. Glad you’re staying safe since your travel system doesn’t tend to lend itself to long quarantines.

We’re in Cincinnati at the moment, but haven’t done too much here – mainly working and seeing some friends that live nearby. With our road trip pretty much paused, it’s been remarkably hard having the motivation to actually go out and do travel-type stuff which is still fairly safe to do (like hiking).