Southwest has announced a revaluation of Rapid Rewards redemptions today. Although there are some improvements, this represents a devaluation for the majority of people. In the past, Wanna Get Away fares offered the best value for your Rapid Rewards points as they could be redeemed for ~1.38cpp. Redemptions for Business Select and Anytime fares offered far less value at ~0.83cpp and ~1cpp respectively.

Southwest has revalued all three types of fares today, with the cost of Business Select and Anytime fares going down, but with Wanna Get Away fares going up.

Seeing as the vast majority of Southwest customers redeem their points for Wanna Get Away fares, that represents a devaluation. The change is between 5-8% so it’s not a huge devaluation, but it’s a devaluation nonetheless.

What are your thoughts? Will this change your Southwest flying habits? 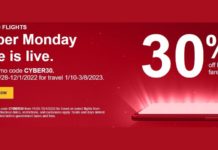 The new true value of Southwest points, 2018 edition. How to get up to 1.9 cents per point value. - Frequent Miler

[…] this week we reported that Southwest had changed the value of their points when redeemed for flights. They slightly reduced the value of points applied to Wanna Getaway Fares, but greatly increased […]

Same thing with all of them .Read ur Blogs do ur Homework all have a sweet spot .Then transfer ur points there ..Citi AA card was 40k in 2011 and 4ok nonstop ORD>CDG rt Now 60K card and 60K for same trip..

Between this post and the Barclays Arrival Premier nonsense, I’m not sure about you guys…

I’ve just reread the title and first sentences and they still seem to be consistent to me. Southwest have revalued their points and will be charging more points for Wanna Get Away fares.

Business Select and Anytime fares will now cost less so that’s an improvement, but most people redeem Rapid Rewards for Wanna Get Away fares so these changes represent a devaluation for the majority of people.

After you get the ticket booked, can you go in and add your companion?

I haven’t done this myself, but there was a good article on the Points Guy website which says that it can be done.

I just bought 4 tickets last Monday, and I looked up on the point prices. All flights are to/from AUS.

Lost opportunity cost when converting pints to dollars at 1.67 cpp (my valuation of it):
$36 out of $663 in flights cost I’ve saved for those flights or about 5%.

Sucks that my companion pass just posted today for me to receive this news, but it’s not like I could’ve done anything else, and at least I booked all the flights last week.

So, basically they went to a more-or-less fixed value on awards (there seems to be a little bit of fudge on the WGA awards but otherwise it’s pretty much fixed)? As long as they don’t do an overall devaluation again, this isn’t really the end of the world…but it would sure be nice if revenue-based programs would stick to their valuation.

Making this change ahead of announcing Hawaii flights I’m sure…

That’s exactly what I thought!

I’m on a wait and see with this. Lots of times with Southwest it looks bad then ends up being favorable to me. Back in the day, with paper reward tickets, they were good for any flight anytime. That wasn’t sold out of course. Well I mostly redeemed last minute. Like on Tuesday flying on Thursday. Then they went to something else…I can’t even keep track anymore…so I started planning ahead because I could no longer afford all the points or whatever it took to redeem last minute. Well I noticed my points were allowing me to fly a lot more often than the old way. I just had to plan ahead…or go to low demand places. Like go to Vegas the week after New Years…low demand. Or go to Denver in the summer when no ski season. It’s all good. So now I noticed I don’t even care about the points so much. I paid $45 hou to mco o/w last fall for several trips. Who cares what the redemption is at that rate. I just paid cash. ‍♀️ Or more likely used a discounted gift card . Or maybe a gift card from an annual travel fee reimbursement. Basically the only thing I care about points anymore is to earn the companion pass and to pay for other people’s tickets. But I’m really trying to wean myself off the latter

Depending on the route, even with the devaluation, it costs fewer miles/points on SWA than many other airlines. For example, you can’t go anywhere on Frontier for less than 10,000 miles. Plus SWA gives you the first two bags for free. That’s worth a LOT of miles/points.