British Airways, Iberia, and Aer Lingus “share” the currency called Avios, though each program has its own award chart and loyalty program. It has long been theoretically possible to move Avios between your accounts in each of the three programs (British Airways Executive Club, Iberia Plus, and Aer Lingus AerClub), but many people have had difficulty in doing so. Later this month, it will get a little easier to accumulate Aer Lingus Avios since they are going to become a direct transfer partner of American Express Membership Rewards at a 1:1 ratio.

This is only a mildly exciting development, through I’m a fan of “easier”, so I guess we can call this a net win. In my opinion, the funniest thing was that the press release highlights the fact that Aer Lingus is the newest Membership Rewards airline partner “since Etihad Guest was launched in 2016”. Since you could already transfer from Membership Rewards to either British Airways or Iberia Avios and (at least theoretically) transfer from one of those accounts to Aer Lingus, it doesn’t necessarily feel like a “new” airline partner.

That said, this will save members time and frustration, and for that we can all be (at least a little) thankful. On the other hand, the Aer Lingus award chart doesn’t have anything that stands out as a notable value, though maybe if you are on a paid flight for work and you want to upgrade or you need to top off an account it will be convenient to be able to do so via Membership Rewards.

Overall, this isn’t terribly exciting, but it’s worth being aware in case it becomes useful in the future. We have added Aer Lingus to our list of Amex Transfer Partners. 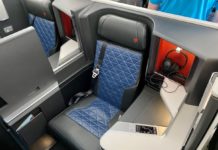 I have Jet Blue as a primary airline because I live in Long Beach and Jet Blue is the dominant Airline for this smaller domestic airport. I travel to Portugal and other parts of Europe pretty often. My international airline is united out of LAX because I have platinum elite status, but they have no direct nonstop flights to Europe except for London, so inevitably if I want to go to Portugal I have to make a stop somewhere. And United really wants you to stop on the East Coast for their own reasons. I have had to learn to work around (which is to book it to London) so that if I upgrade to business class I get it the whole way across the pond. Ive come to find out that Jet Blue has partnered with TAP airlines (the Portuguese airlines) and they ensure the connection on the East Coast, In that if you book it through them, and you missed the flight on the east coast because of a delay at your departure, Jet Blue will take care of that for you without cost.. I’ve now come to learn that air Lingus is also a partner of Jet Blue, I believe to the point that you can ticket the whole thing on one airline and obtainthe miles on one Airlines. Secondly, if you fly home from Dublin, you avoid all of the taxes that you get flying out of London home. And the amount is quite a bit. Apparently Paris Charles de Gaulle is also quite expensive

what a cunning move by amex

My Chase Aer Lingus statement closed on the 20th. So far the avios has not been posted on my Aer Lingus account yet. Do you know how long does it take to post? BA and IB take only a few days.