A few days ago, MileValue declared that Delta had the best award space to Asia that he’s ever seen.  He showed that saver-level business class awards were wide open on quite a few routes to Asia.  This was quite remarkable since Delta is generally believed to have the worst saver-level availability of the major airlines.

View from the Wing responded to MileValue’s post by saying that Delta’s award availability is great if you don’t like your spouse.  He confirmed that business class saver-level award availability to Asia is great for one person, but virtually non-existent for two.  In reply, MileValue suggested booking one seat in business class and one in economy.  I guess that’s a good solution if you just kinda like your spouse, but what if you actually want to sit together?  Here’s something else to try…

Step 1: Book for one

Find the award you want and book it for one passenger.  You have until midnight the next day to cancel for a full refund.  As both MileValue and View from the Wing found, award space for one is remarkable wide open.  Here’s an example showing wide open saver-level business class award from Seattle to Shanghai in July: Step 2: Try to book the second award the next day

Wait until the next day after booking the first award and then search for the same flights to see if new award space has opened up.  If you do the search too quickly (i.e. immediately after booking the first award) it will appear that the seat is available for the second person, but you’ll get an error if you try to book it.  That’s why I recommend waiting until the next day.

If you find an available saver-level award on the same flights, then book it.  If that works, then you’re done.

If you have Delta Platinum or Diamond status, award changes and cancellations are free up until 72 hours before your flight.  So, you can repeat step 2 every day for quite a while to wait for new award space to show up.  If it doesn’t show up eventually, then cancel the first award (or book the second person into economy).

If you do not have Platinum or Diamond status, then cancel the first award before midnight the day after it was booked.  You should get a full refund of both miles and award fees.

Obviously I can’t guarantee that the above approach will work for you.  I have used it successfully a couple of times in the past so I do think it is worth trying.  That said, I’ve used my Platinum status to eliminate the risk of booking awards prospectively and to give me more time to find extra seat availability.  Without Platinum or Diamond status, I can imagine that the above approach may be riskier since you might forget to cancel the first award in time. 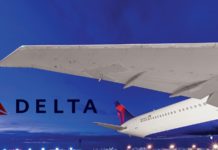 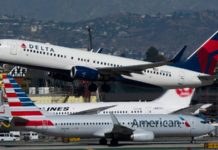 […] Book an award for one person and wait for additional award space to open up for others you will be traveling with (see “Booking Delta awards when you love your spouse”). […]

We had an even more challenging example of what creative mile spending can get you. Our daughter was having a baby last fall. In Italy. I wanted to be there to take care of her so she could take care of the baby. Being self-employed, I could just take my boss with me to Italy, so I went for three weeks.

My husband, OTOH, has a real boss, so he could only take a week. To make the entire thing more challenging, his miles were Delta, mine were Alaska Air. So.

I booked my tickets, round trip, using AK Air miles, at the business class rate, flying Delta. The only flight on the way back that was business was DTW-MSP, but that got the entire trip classified as Business.

When we booked his flights, he was traveling Alitalia trans-Atlantic, and ended up in coach, but he was OK with that. For the trip home, we flew together from MPX-JFK. Initially, we both had paid the $79 for premium coach seats, as that was all that was available.

Then, I started calling. Alaska Air is two hours behind me, and their Awards customer service opens at 5 AM. So, every couple weeks, at first, I’d call at 7AM my time. As the days got closer to my leaving, I started calling daily. Finally, about 10 days before my outbound flight, there was a biz class seat open for AK Air miles. It took five hours for it to book, but I was in. We then called Delta, because they won’t open biz class seats for partners, if they’re not opening them for Delta miles.

The total cost of the changes was -$$. I already had paid for biz class, so my seat change was about $3, minus the $79 I’d paid for the premium coach. His change was NOT $150, because he was changing seats, not the flight, and it ended up being a slight negative cost, as well.

We had to fly separately from JFK to our home base of MSP–his flight was direct, mine was JFK-DTW, DTW-MSP, but that long leg over the Atlantic was together, and in the right section of the plane. It took a lot of phone calls, but the customer service people at both Delta and Alaska Air were unfailingly polite and eager to help, even if all they could do was say Not yet.

Moral of the story is this: book your tickets in separate classes, heck, even through separate partners, if you must. Just book yourselves on the same flight, and then keep checking. The airlines would rather put YOU in business class with your miles than to have that seat empty, and a much more sellable seat in coach unavailable, because you are sitting in it.

Great story, thanks for sharing!

Catching up - The Frequent Miler

[…] Booking Delta awards when you love your spouse […]

I haven’t tinkered with Delta award bookings much but the way you describe it, I wonder if a 2 browser method might work? If 2 people are concurrently searching for the same award space they’d both see 1 seat available. If they both went to book it at exactly the same time, what would happen? One would get it and the other would be strangely annoyed that the seat disappeared underneath them after the site showed award availability?

@FM You of AMEX multiple browser offer perfection need to execute the great plan of Robert and let us know the outcomes………Seeing that you are sitting on a gazillion Delta miles………..

Unfortunately, the 2 browser method does not work. This has been confirmed multiple times on FT and other blogs.

Yeah, I’ve tried that before. One person gets an error when they try to book it.

FM, Thanks for sharing a caring husband’s love for his spouse post.

Great approach…….depressing note in Northern CA as Charlie Victor Sierra suddenly has an empty VR rack……..even after I had the manager scan out the bar code and insure that inventory was recorded at zero……….instead of new VR cards the old non reload able to Bluebird cards came in……..I am hoping this is not a long term scenario or it may make me want to jump off the bridge………….

Just curious, where did your visa 1% cashback post go?