Here is Iberia’s American Airlines award chart (their OneWorld chart is very similar if not identical): AA usually charges 50,000 miles for round-trip 2-cabin 1st class (this is considered business class when reading award charts like the one above).  As you can see in the Iberia AA chart, a round-trip flight with a combined distance of 4,000 miles or less will cost fewer Iberia Avios than AA miles.  Between 2,001 and 4,000 miles, though, the difference is very small: 46,000 Avios vs. 50,000 AA miles.  The real savings appear with flights 2,000 miles or less.

I recommend using Great Circle Mapper to calculate specific route distances.  Another great option is to use GPS Visualizer to display a radius around an airport.  For example, to get an idea of which airports are within 2,000 miles round-trip of Detroit, I setup GPS Visualizer to show me a 1,000 mile radius around the DTW airport.  To the extent that AA flies non-stop, this means that it should be possible to fly round-trip business class for 34,000 Avios or less within this bounds: In the map below, generated by GPS Visualizer, you can see that parts of western Europe, northern South America, and North Asia are within the 5,001 – 8,000 mile sweet-spot from Detroit (100K Avios for round-trip business class).  In reality, though, there aren’t any non-stop AA (or other OneWorld carrier) flights from Detroit to those locations, so actual itineraries will include stops which will make the overall trip longer.  In other words, the real sweet-spot band around Detroit is smaller than shown (due to required connections), but at least this gives you a starting point to know what might be possible: When you include multiple cabins in one award (e.g. economy in one segment, business in another), Iberia calculates the award cost as a weighted average based on the distance flown in each cabin.  As a result, it is sometimes possible to make a business class award cheaper by traveling farther, as long as the extra distance is in economy.

Here’s a real example.  I priced out an American Airlines business class award from Philadelphia to Dublin, round-trip, using Iberia Avios.  This came to 100,000 Avios plus $352 in fees:

Next, I made the trip longer by starting and ending in Detroit but connecting to the same round-trip flight from Philadelphia to Dublin.  The new route is:

By flying Detroit to Philadelphia in economy, we can make the Avios portion of the award cheaper.  The new route costs 93,000 Avios plus $367 in fees.  The fees went up a bit, but the award price went down by 7,000 Avios:

The reason this works is that the total distance of the flights is still within the same row on the award chart, but now a percentage of the award is economy rather than business, and so it brings down the weighted average.

The Math for the above Example

Can we hack it?

The way to get the most business class for the cheapest price with Iberia’s AA (or OneWorld) award chart is to add on maximum distance economy segments while staying within the same cost band (in a few cases, though, it actually pays to go over to the next band or two).

The ideal approach for doing this would be to add throw-away segments, but that’s tough to do in this case since Iberia requires round-trip awards when flying AA.  And you can’t abandon a flight in the middle of your itinerary without risking having the rest of your itinerary cancelled.  So, unless you are OK with ending your trip on the return mid-way between your origin and your destination, a throw-away segment isn’t practical.

Instead, the key is to book business class for the segments that are most meaningful to you and then to lower the overall cost by booking the other segments in economy.  The Detroit to Dublin example, above, is a good one.  The flight from Detroit to Philadelphia is short and you wouldn’t benefit much from being in domestic first class on that flight.  The flight from Philadelphia to Dublin, though, is much longer and you would certainly benefit from better seats and service in business class, especially on the outbound overnight flight.

Another similar example is this one: Fly round-trip New York to Zurich via London with the transatlantic portion in business class and the flights between London and Zurich in economy.  Again, the total Avios cost is less than 100K: 92.9K.  It makes especial sense for the European portion to be in economy since most European flights use the same seats in economy and business class (with the main distinction of having the middle seats blocked off in business class).

One-way awards via a throw-away return

What if we just want to book one-way business class awards?  We could book the outbound in business class and the return in economy.  This chart shows the expected price for that approach via the “Half & Half” column:

As we showed before, this range can get us from Detroit to parts of western Europe, northern South America, and North Asia:

Given that the round-trip award price for the same range would cost 100K Avios or less, I don’t see any good reason to go with the throw-away return option unless award availability simply doesn’t exist for when you need it (in which case you can book the throw-away return for anytime that you can find the economy award space).

In Nick’s post he mentioned that these awards are nonrefundable and nonchangeable.  Unless I’m booking something last-minute, I’d hate to be locked in that much for what amounts to modest savings over other award booking options.

Also, Iberia’s website is buggy and limited.  It doesn’t have a multi-city search, so there’s no way to specify exactly the route you want if it involves layovers.  You just have to hope that the layover city you want comes up in the search results.

Overall, I see it as a fun challenge to try to find sweet-spots and hacks in weird programs like this one.  And there’s more to-do.  For one, I haven’t yet compared Iberia Avios awards to those available from other OneWorld airlines such as Cathay Pacific.  Even if Iberia has some good prices, it’s likely that others have better prices (hint: they do).  Another to-do is to investigate some of Iberia’s other award charts.  Iberia has different award charts and allows one-way awards for flights on Iberia and BA, for example.  In those cases, I think there is much more opportunity for hacks such as adding throw-away segments to reduce the award cost.  Stay tuned.

(EXPIRED) Iberia Plus: 50% bonus when you buy Avios 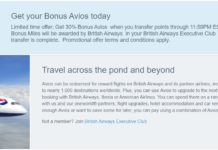 […] a ton of work into it and should be read. If you’re not following them, you should. Read this post here on how to redeem your Avios and get the best bang for your buck. Suffice it to say that there are dozens of place to […]

Is it possible to do a tutorial for the GPS visualizer. I can’t for the life of me figure out which one to use. Maybe it’s the city that I’m using because it doesn’t return a value.

Try this:
1. Browse to http://www.gpsvisualizer.com/calculators
2. Scroll to “Draw range rings around a point”
3. In the Location box, put in a 3 letter airport code
4. For radius, if you want the chart drawn in miles, change it to “mi”. e.g. “1000 mi”
5. Click “draw map:
6. On the map, change from Google Hybrid to Google map in the dropdown on the top, right

Thanks Greg, you’re the best!!!

[…] my recent post “Searching for business class sweet-spots in Iberia’s OneWorld award chart,” I wrote “I haven’t yet compared Iberia Avios awards to those available from other […]

[…] Business Class Sweet Spots on Iberia’s OneWorld Chart:  Sweet spots are… well…. Sweet!  Being able to save miles on award flights is incredible.  There are a few tricks that you could use with Iberia’s Avios. […]

[…] this week I posted “Searching for business class sweet-spots in Iberia’s OneWorld award chart.”  In that post I showed that it was possible to make Iberia OneWorld business class awards […]

How did you get those great radius maps?

Can you do 1 way with One World? Meaning 1 way US-Europe/NA/Asia with British Airways?

You can do one-way if you fly just BA and/or Iberia. If you add in another OneWorld airline such as AA, Cathay Pacific, etc then it is round-trip only.

Ok so if I am reading it correctly, it is less miles to fly on BA metal than on Iberia for certain routes? Can you book just BA online so that way it should list the miles required based on the award chart for OW and not for Iberia?

Those are some brutal fees.

For economy the fees make it too expensive, even though we’re always told to transfer from BA to IB to avoid fees.

From the east coast my interest in biz class is mostly far-east, although I do enjoy sleeping ly-flat on the redeye to Europe.

There is also a peak and off-peak variable to be added to the equation that I don’t think I saw mentioned. I recently booked Iberia business class seats from Madrid to Boston for 34,000 avios, believe its off-peak in early September.

Great post I trust flying American metal and a few times 3 or 5k points saving got me my trip Years ago.AA stick to me badly BUT gave me 5k points which was just enough extra to get back to CDG the next year.