Google Fi is offering an intriguing discount on the newly-released Google Pixel 4a with 5G for both new customers ($200 off for a net price of $299) and existing customers ($150 off for a net price of $349). I personally pre-ordered a Pixel 4a 5G from T-Mobile this week and considering the fact that the phone more closely resembles the Pixel 5 than the 4a in terms of specs, these look like terrific deals. You have to keep service with Fi for 60 days, though Amex Platinum cardholders may be able to use temporary COVID credits to mitigate that cost. Note that there are conflicting reports as to whether Fi codes as streaming or wireless services (or neither), so YMMV. 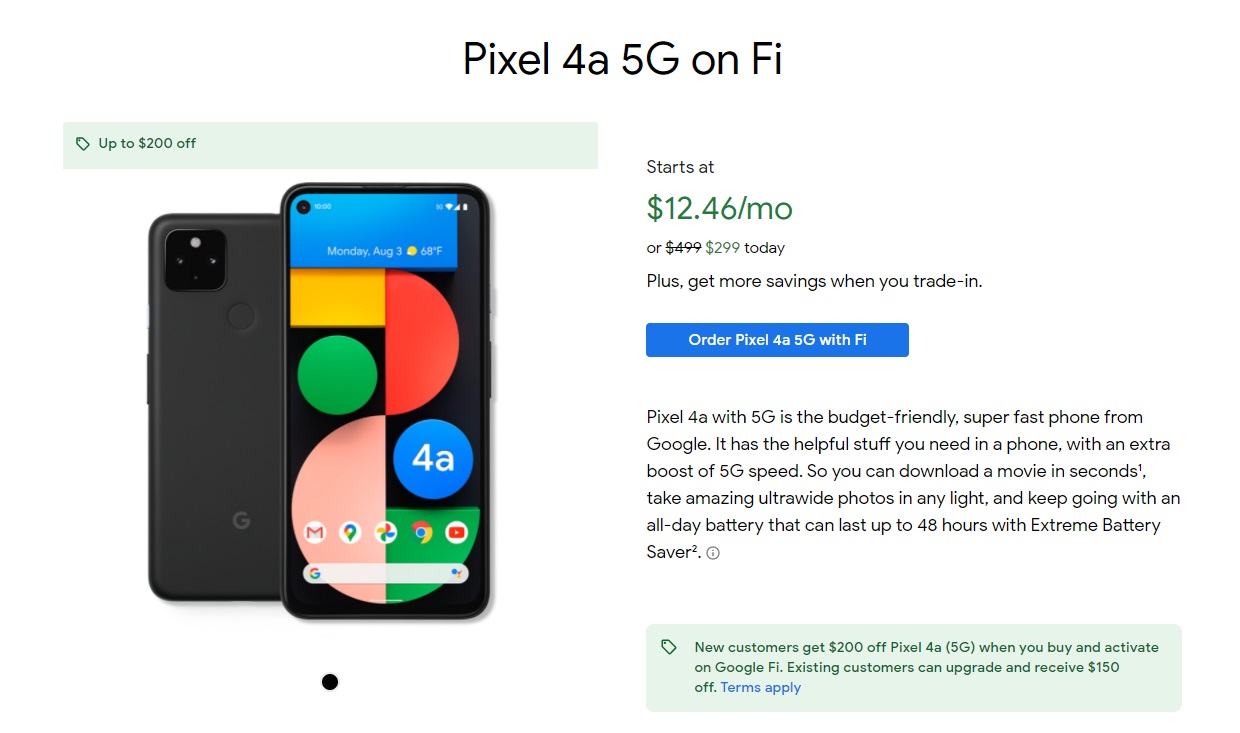 How do I qualify for the $150 discount as an existing Fi customer?

Any other details to know?

I know that many readers are Google Fi subscribers thanks to the same-price full LTE International coverage, so I thought the $150 discount for existing customers may be particularly appealing. That puts the price even with the Google Pixel 4a. Given that the 4a with 5G has the wide angle dual rear cameras of the Pixel 5, a faster processor, larger battery, and bigger screen size than the 4a, I think this is worth considering even if you don’t live in an area with 5G service.

Speaking of that, Google Fi runs on T-Mobile, Sprint, and US Cellular. T-Mobile has recently expanded 5G coverage. I own another 5G phone (the OnePlus 8) and until this week, I haven’t been able to get 5G coverage in my home. I live in a very rural area (like 30 people per square mile rural), so that wouldn’t be a surprise to most people. Still, I was able to get 5G just up the road and if I walked out in my lawn a distance from the house with a clear view of the tower. However, this week it got better: after a couple of days of spotty service where it seemed like they must have been doing some maintenance, I suddenly began getting full 5G at home. To put this in perspective, until moving over to use our T-Mobile phones as hotspots and later to T-Mobile home Internet, I was stuck on DSL Internet service where I’d be lucky to get 1 or 2 megs down and up. I took a screen shot literally 9 days ago with 4G LTE at home where I was getting about 12 Mbps down and 3 Mbps up (at home I would sometimes get upwards of 18 Mbps down and 6 Mbps up). Things are significantly improved with 5G today: All that is to say that there may be better Google Fi 5G coverage in your area than you expect. That said, I personally wasn’t thrilled with Fi coverage. I have a Fi plan on pause (holding out for international travel again one of these days!), but I kept it kicking around beside my T-Mobile phone for a while. I was surprised that in some places where I had a T-Mobile signal I wasn’t getting a Google Fi signal (and clearly I should have since T-Mobile is one of their providers). It wasn’t a constant problem, but it was enough of a problem that it would have annoyed me.

However, for twenty bucks a month and $10 per GB of data up to a cap of $60 (then data is “unlimited”, though they may throttle you at 15GB), it may be cheap enough — especially for those working from home and connected to Wi-Fi almost constantly these days. Indeed, if I didn’t need the unlimited hotspot feature that I have on my plan, I would certainly consider Fi again.

If you’re coming in as a new customer, you have to port in a line (the terms indicate that they’ll claw back the discount if you choose a new number). Whether you’re new or existing, you’ll have to keep your line active for 60 days after purchase. A data-only line does not count. Still, if you’re paying for Fi or interested in it, that isn’t a big hurdle. And as mentioned at the top, since both the Amex Platinum card and Business Platinum card are offering $20 monthly credits for wireless services through the end of this year, you may be able to mitigate the cost of service with those credits (though some people have said that Fi triggered the streaming credit and others none at all, so YMMV depending on how it is billed I think).

The terms indicate that “Unless otherwise stated, this offer cannot be combined with other offers.” A literal read there would indicate that you can’t combine this deal with the refer-a-friend offer. However, I clicked through a referral link and then navigated to the “phone deals” button in the center of the page and it showed this deal on the Pixel 4a 5G. I tend to think you probably could stack it with a referral bonus. The current referral deal is to get a $20 credit when you sign up through a friend’s link and keep service active for 30 days. Again, I don’t know for sure that it’ll stack, but if you want to give it a shot here is Carrie’s link.

Personally, I have become fully #TeamPixel. It started with a crazy deal they ran on the Pixel 3. My wife still uses the Pixel 3 XL from that deal. Then I bought a Pixel 3a because it features the same outstanding camera of the Pixel 3 XL. I bought a third phone, the OnePlus 8, on a 50% off discount in the hopes of getting 5G at home with it. Unfortunately, I’ve just been really disappointed in its camera, which is the second most important feature for me after speed of service. The Pixel cameras had spoiled me. The one thing I really like about the camera on the OnePlus is the wide angle lens. I was thrilled to see the Pixel 4a with 5G add this and it is part of the reason I decided to upgrade my Pixel 3a. I am also excited about some of the software features (apparently, with the Pixel 4a with 5G and the Pixel 5, you can ask the Google assistant to hold for you. It listens to the hold music for you and then alerts you when a human picks up. Hello!).

Since I have T-Mobile service, I upgraded through T-Mobile as they are having a trade-in promo where you can trade even a first generation Pixel and get the Pixel 4a with 5G for free when adding a line or you can get $250 in bill credits toward the $499 full price of the Pixel 4a with 5G with a trade without a new line (making it a “net” cost of $250 plus the value of the phone you trade). For many people, the new customer Fi deal will be better — and the phone is unlocked when you purchase it from Google.

However, note that Verizon customers probably don’t want this deal. The Verizon variant of the Pixel 4a with 5G costs $100 more because of some additional bands required for Verizon’s high speed service. If you want what Verizon calls 5G, you’ll want the Verizon variant as best I can tell. If you’re looking to use the Pixel on Fi (or to move it to T-Mobile, AT&T, or one of the myriad of cheaper MVNOs after maintaining service for 2 months with Fi), this deal looks good to me. 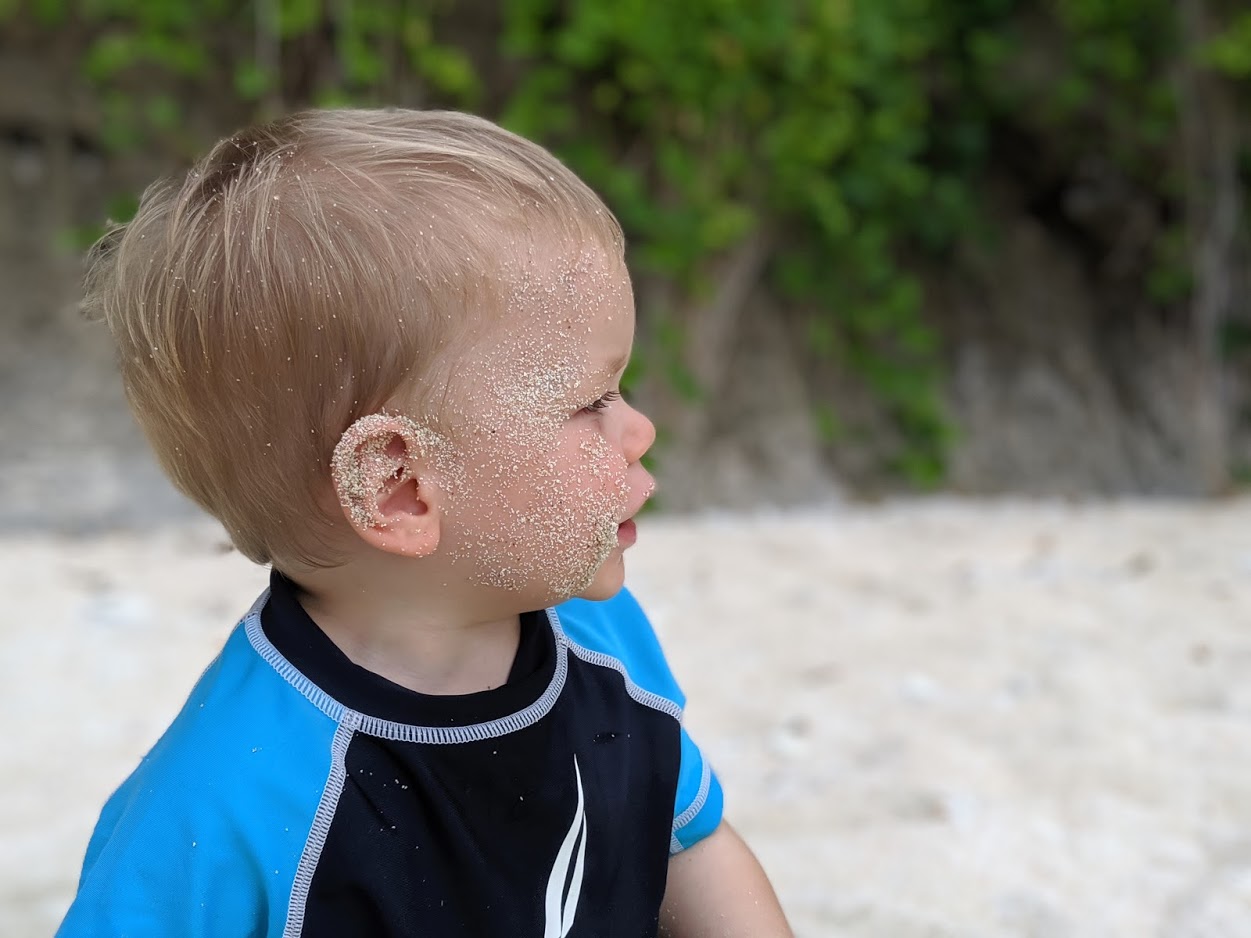