When great flight deals are reported online, on this site or others, I’m often interested, but it’s exceptionally rare for me to take advantage of them.  The deals hardly ever include departures out of my home airport (Detroit) and the timing of the deals rarely meets my needs.  Luckily, Google Flights makes it easy to find great flight deals on your own.  You can easily narrow the search to flights from your home airport (and other airports you can get to easily), dates of interest, and destinations of interest.  And, if you strike out on finding exactly what you want, you can setup alerts so that Google Flights will let you know when deals of interest appear.  In this post, I’ll show you how to find smoking hot deals on your own… 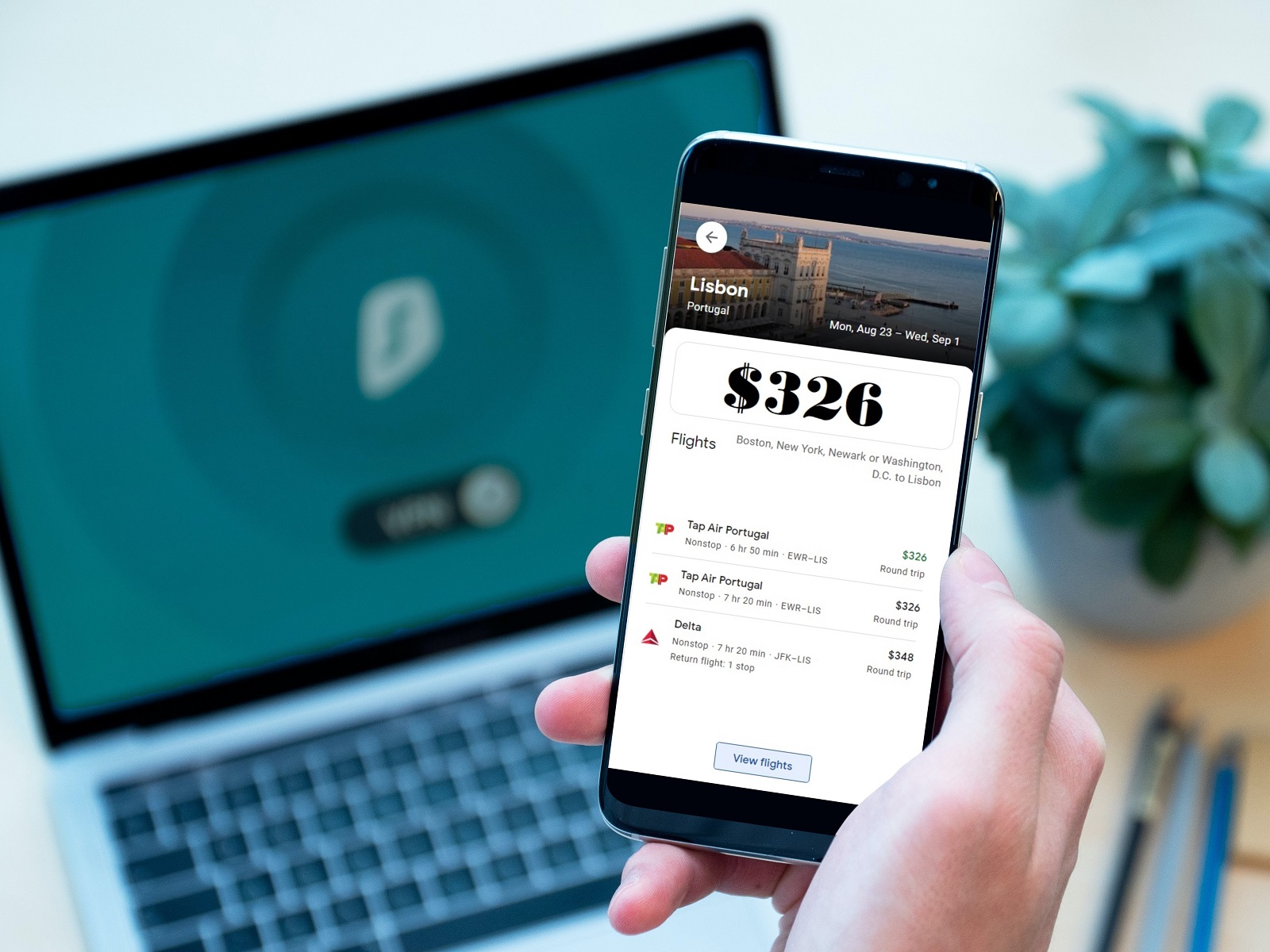 Despite the image above, I recommend using Google Flights from a desktop browser rather than a mobile phone.

Step 2: Enter your starting city and class of service

Do not (yet) enter your destination.

In the “Where to?” box, pick a general destination such as a state, country, or continent.  Examples include “California,” or “United States,” or “Europe” or “Asia.”

After selecting a general destination and pressing “search”, as described above, you should see a destination map with flight prices for the initially selected (or default) date range: Click either the start date or end date to bring up a date selector pop-up.  Click on “Flexible dates” and then choose from the options presented.  For the purpose of this post, I’m interested in a 1 week trip in August and so I selected “August” and “1 week”: 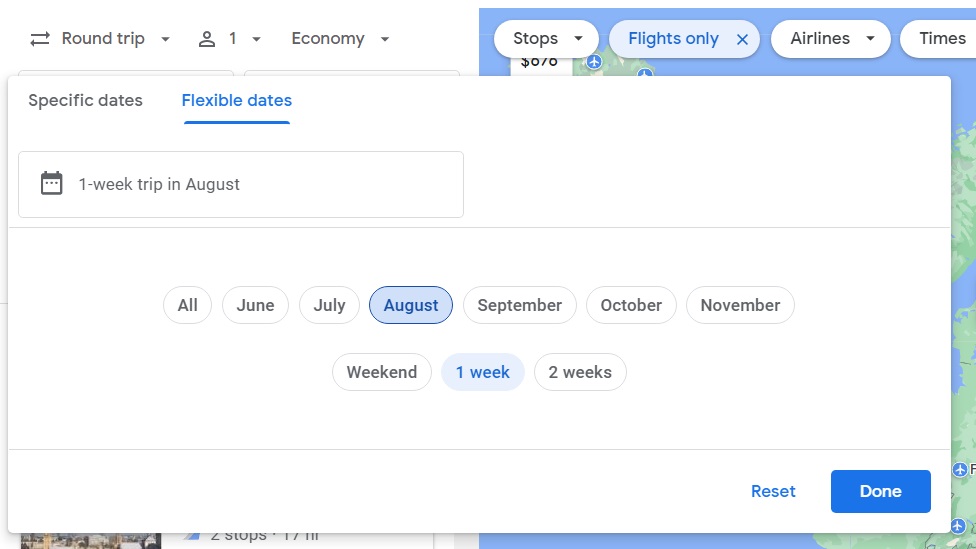 After pressing “Done”, I see an updated Explore map: 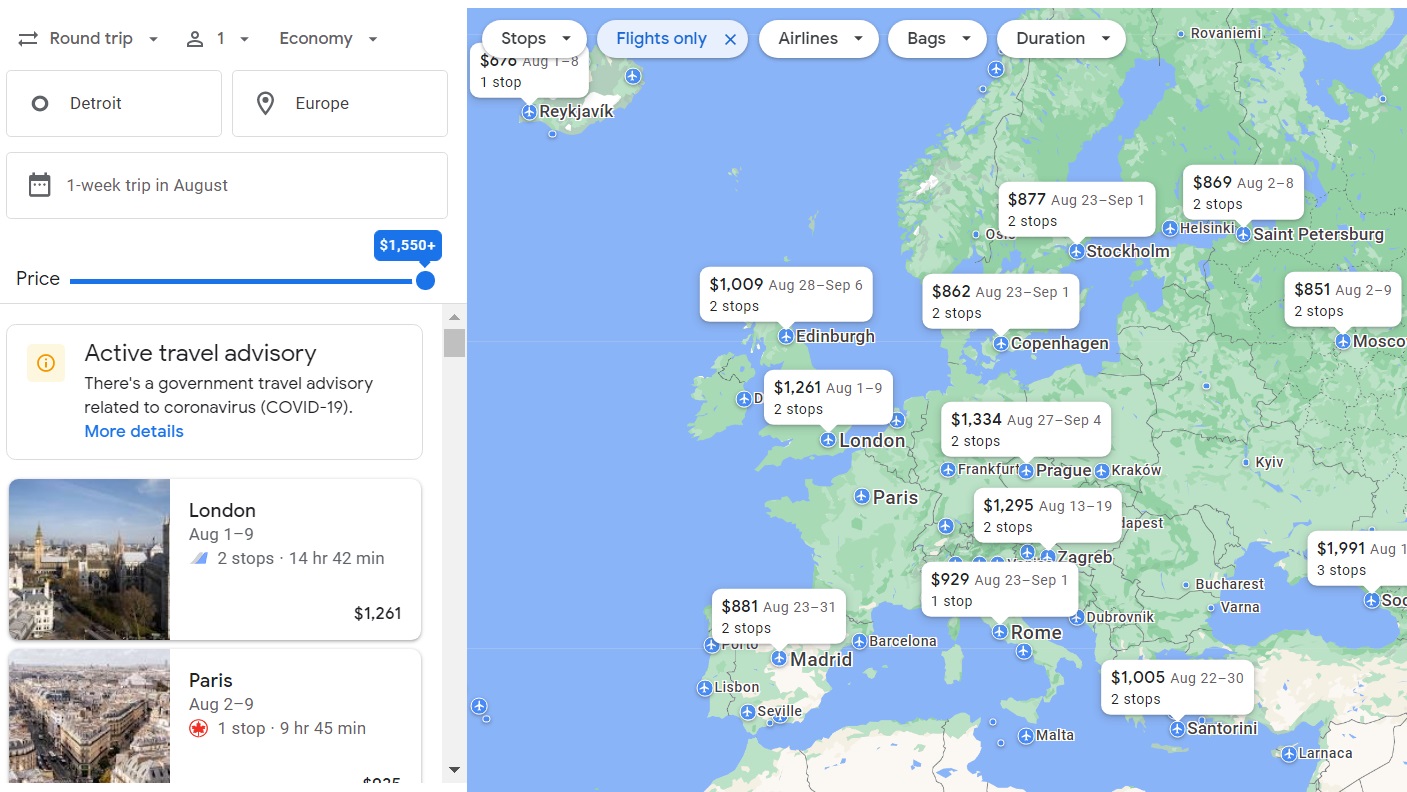 Most of the deals that I found so far require 2 stops.  If I’m only interested in one-stop options, that’s easy to change.  A drop-down on the map itself lets you select the maximum number of stops: 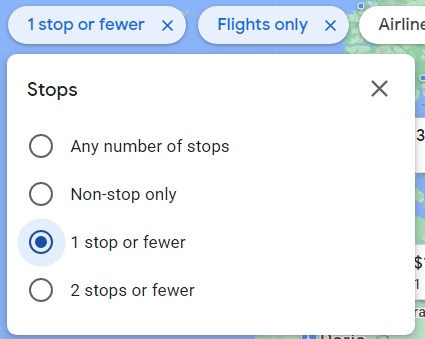 That selection resulted in this: Step 7: Hover over airports of interest

Google Flights doesn’t automatically show the prices for the best deals.  Instead, it seems to use it’s own logic to pick which destinations you may be interested in.  Luckily, you can easily hover your mouse over other airports of interest to quickly see those prices.

For example, in the map above, neither Paris nor Dublin were shown with prices, but by hovering over each, I found that the prices were pretty good: 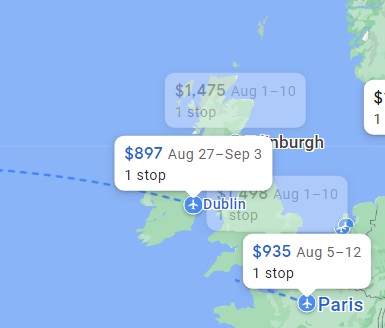 I know from experience that $900 is a very good price for flights from Detroit to Europe, especially for summer travel.  I also know, though, that far cheaper flights are commonly available from other airports.  If you’re willing to separately position to one of these airports, you may be a able to save a lot of money.  When looking for flights to Europe from the Midwest you might want to look at the following departure cities which tend to have great flight prices: Boston, NYC, Washington DC, Miami, and Chicago.  When flying west (to Asia, for example) or when departing from the west coast, make sure to check for flights departing from Los Angeles, San Francisco, Seattle, Vancouver, and Las Vegas.

Google Flights allows a maximum of 5 departure airports.  It seems like you can trick it to using more than 5 by selecting area airports all as one (such as New York City) but then weird stuff happens and it only seems to work.  So, I recommend picking specific airports, like this:

By selecting the above cities, I’m now seeing much cheaper prices: 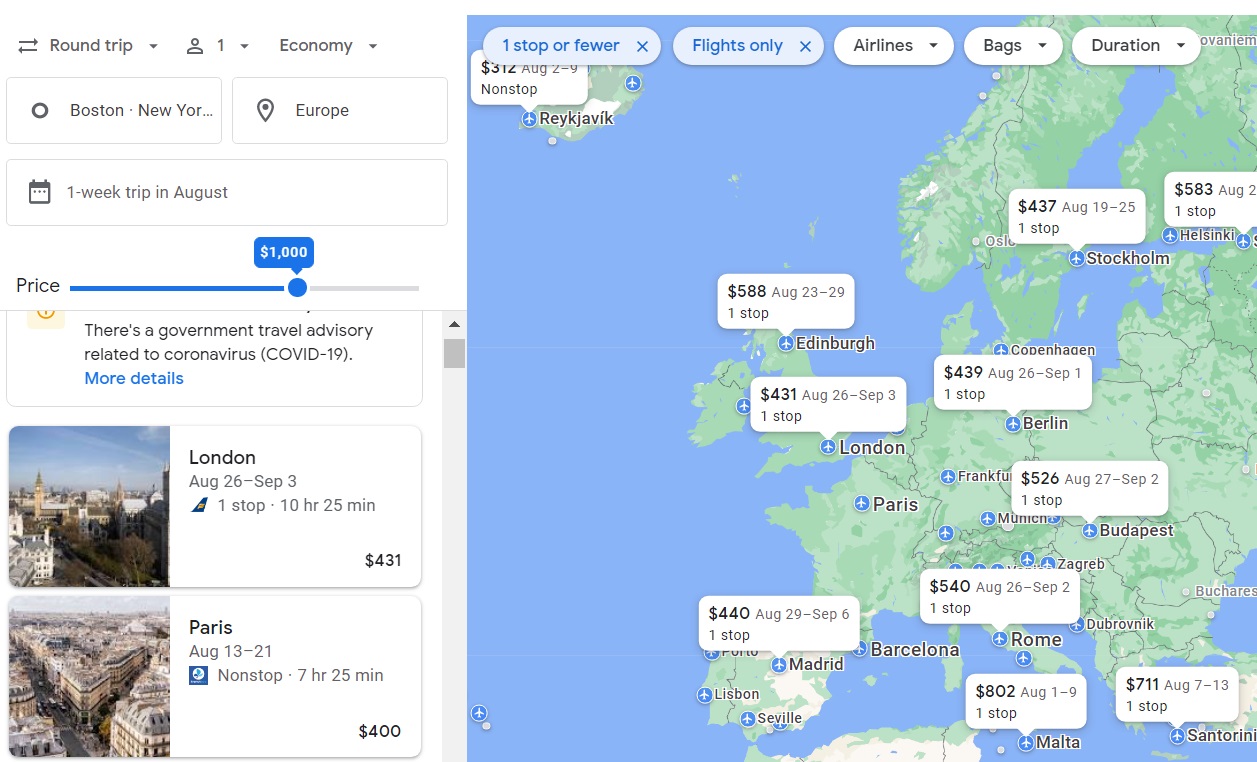 By dragging the price slider to the left, you can more easily see the cheapest available destinations.  I used the slider to reduce the maximum price to $400 round-trip from the U.S. to Europe and found a number of options available: Dublin for $385, Paris for $400, Frankfurt for $364, Munich for $365, Porto for $344, and Lisbon for $326.  Those are amazing prices! 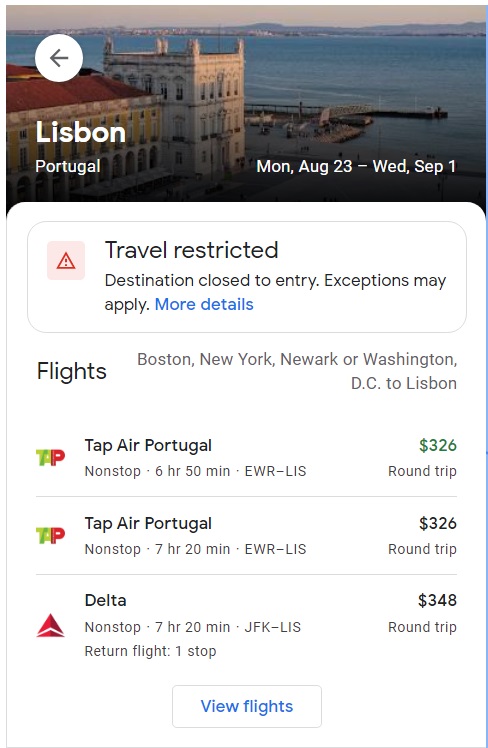 As you can see above, only one departure date is available for $326 round-trip, but $349 rates are available every day!

The Downside of Alternate Departure Airports

Above, I showed how I found $326 round-trip flights to Europe.  That’s crazy cheap, but I had to search departure airports beyond my home airport to find that rate.  If I could find a very cheap positioning flight to/from Newark or JFK (depending upon which flight to Europe I choose), it could be well worth booking a flight like this.  That said, there are major problems with this approach:

One approach that can help, is to position the day before.  In the example in this post, I could fly to New York the day before the flight to Portugal in order to reduce the chance that a delayed positioning flight would ruin my trip.

When traveling alone, I’m usually willing to put up with the inconvenience or risk caused by separately booking positioning flights, but when traveling with my family, I’m willing to pay more (with cash or points) to book the entire journey from my home airport.

Using the same techniques described above, it’s easy to find cheap flights within the United States.  Simply set “United States” or a specific state “California”, “Florida”, etc. as your destination. Using the same techniques described above, it’s easy to find business class deals too.  For example, I found a number of 1-stop round-trip flights from Detroit to Europe for less than $2,500.  That’s not an amazing price, but it’s very good for Detroit departures, especially for summer travel: Some of the cheapest business class flights I found were entirely on Delta.  This is very interesting in 2021 for those seeking Delta elite status thanks to Delta’s 2021 elite status accelerators.  See also: Shortcuts to Delta Elite Status in 2021.

One of the downsides of Google Flights is that it achieves its super speed by caching prices as it finds them.  As a result, when prices are changing rapidly (as they often do during fare wars), you may see one price at first, but then a completely different price once you’ve selected particular flights.

For example, I once found a $2K business class flight to London that I wanted to book, but found that the price had jumped considerably (to $3,268!) once I selected my outbound and return legs:

If you have an American Express Platinum Card, and if you’re booking an international trip, it’s worth logging in to Amex Travel to check prices.  Platinum cardholders have access to the Platinum International Airline Program which offers cheaper fares for some flights.  Take the business class flight from Detroit to Venice, for example.  Above, I showed that this round-trip flight cost $2,360.  When I put the same dates and destination into Amex Travel, though, Amex came up with a slightly lower price: $2,233.  That’s a savings of only $127 per passenger, but still it’s something!

Check out these other tricks for saving cash or points when booking flights: 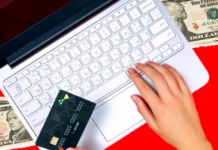 Delta Choice Benefits: Which to choose and when

[…] This is an excellent guide to finding the fare of your dream on Google Flights: How to find incredible flight deals with Google Flights, by Frequent Miler. […]

Booking the cheapest flights and being willing to forgo seat assignments and a checked bag get you a great price. If you want a checked bag and be guaranteed you’re sitting together the price quickly climbs. I often search for Premium economy seats. Usually, for a couple of hundred dollars more you can fly on a “Domestic” 1st class seat with checked bags and seat assignments included.

Another example of why The Frequent Miler is the top points blog. Great detailed article!

Minor request, but would you consider adding brief notes to mention what was updated when you repost these? Assuming something was changed today, anyway.

[…] This is a really good newbie friendly guide on How to find incredible flight deals with Google Flights. […]

[…] Anyone else notice that flights aren’t cheap? I’m saving this one for tips. How to find good deals with Google flights. […]

lol typical complainers…not everything revolve around you. If it is not helpful for you move along. Thank you great article!

Wow, the lesson is that flight prices out of Detroit are terrible. No wonder Greg loves Delta. It must be Stockholm Syndrome from living in a fortress hub.

This would be more aptly titled, “Beginners Guide to Google Flights.” It’s all good and valuable info, but it is SO basic and is common knowledge for anyone who has done more than 2 or 3 flight searches on Google.

These kinds of misleading titles encourage me to just skip your blog during my daily read-through.

Instead of making such an unnecessary comment, you could have posted something helpful to everyone. Fine if you want to move on, your presence has added nothing here anyway ya leech

Not true. I use google flights but haven’t used some of this info. Thanks, Greg!

This is incredibly helpful! Thanks for sharing.