It’s a sad day for United Mileage Plus members: United has removed its partner award chart. That absolutely stinks. This means that partner awards will now follow United’s dynamic pricing algorithms and may cost more or less than they do today (though I wouldn’t count on them costing any less). The lack of clarity as to the value of a mile (since you can’t plan for how many you’ll need for a particular trip) makes collecting United miles a questionable proposition moving forward. United had done away with its own award chart last year (Greg did eventually note the bright side of that, but let’s be real: it was mostly a devaluation). When they removed the chart for their own flights, United said that the partner award chart would be unaffected for the time being. I don’t think any of us expected that they wouldn’t eventually move to dynamic pricing on partner awards, but it is disappointing nonetheless. I find it particularly crummy for them to usher in this change with no notice at a time of such uncertainty about the program and the future of partner airlines. It sure feels like they tried to sneak this in when many members aren’t paying much attention due to the COVID-19 pandemic.

Moving forward, I’d question the wisdom of crediting flights to United Mileage Plus given that you have no idea how many miles will be needed for an award ticket. Given my United Silver status due to having Marriott Titanium, I will probably continue to credit to United until my status expires, but after that I would rather use wheretocredit.com and credit to an airline where I can have a more clearly-defined value and use for the miles for planning purposes and stick with earning Chase Ultimate Rewards as a backup to transfer to United if and when it makes sense to do so. 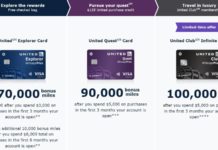 So how does that affect awards like LH first? They were around 113,000 pts. Will the cost now go through the roof since the tickets are very expensive?

Milesformags is looking better every day. I wish they still had the Economist, but I got Barron’s yesterday.

Very unfortunate timing for us. United scheduled us on a flight leaving a full day later than originally scheduled, which did not work with our other travel plans. Did not receive a notice even though this was a United flight (at least the first leg) booked through United. Happened to notice this today and was looking at re-booking to a day earlier than we were originally scheduled. Since I looked this morning the award fee on the flight went from 80k to 88k now (“Saver” level business award). Very customer unfriendly move by United. I’m United Gold now but will need to seriously consider if it’s worth maintaining going forward.

As a follow-up, I called the Premier Desk, and in this situation, they were able to credit the 8k miles back to my account.

The prices have already gone up unfortunately on partner awards. This is the 3rd piece of bad news from United this week. I’m going to use my Plus Points and then abandon my hard earned 1K status. No sense being loyal to United anymore.

First, this is the end of singing up for big spend sign up bonuses for me unless the points are tied to a multi-use transferable currency. I did the $25,000 spend 100,000 mile United business card at the end of last year and now have been double burned. Once when they later introduced a similar bonus on a new card but with only $10,000 spend and again now when they have devalued the 100,000 points. They still have value but I don’t do MS and so $25,000 in spend comes with significant opportunity cost. I’m done with these programs selling you one thing and then pulling the rug out with devaluations. I feel the same way about using 2 5/24 slots on the IHG cards only to now see them moving to dynamic pricing, which will reduce the value of the points and make the 40,000 cert more and more difficult to use for value.

Second, and related, I’m really starting to give serious consideration to moving over to a cash back model and forgetting about spending for points. Preferred Rewards is really starting to look attractive. I’ll still do sign up bonuses where it makes sense but it’s getting so much harder to actually find value these days.

I agree. It will be interesting going forward. Maybe bargains will return but for those of us that don’t MS, credit cards may become less valuable. I have around 600,000 AA/BA miles combined that are pretty worthless right now.

I kind of like the simplicity of my Amex Blue Cash card (3% groceries, 6% gas). If companies aren’t going to waive fees on travel cards, then I will cancel many of them.

Thanks, I should look into that.I have enough points for like 4 years so CASH. We ran about 30k new cases a day in April so no change really.
#stayincave

They’ve already gone up. I happened to be looking at Tokyo to ICN yesterday morning and found widespread 8k/30k for economy/business in January. They’re now all listed at 9k/33k.

Going forward the value of points could be almost anything. If there are a ton of seats available maybe airlines will make more available for redemptions. Or maybe they will largely make points worth much less. There are a ton of people who see no issue with redeeming tons of points for domestic coach flights.

I’m starting to cancel cards. First up was Hyatt. While the fee isn’t high, the free night was pretty useless to me. I either didn’t use it, or had to make a strong effort to find a category 4 hotel to use it for a night. I’d rather keep the AF and put it towards a paid room when I do need it. I sent Chase an email and the automated message indicated it could take a while to respond but it was resolved within 24 hours.

Once the Aspire comes around, that will likely go next. Diamond doesn’t get you much and I can get Gold from a variety of sources.

Cash back cards are looking better and better.

I like that there is a “bride” side of United eliminating its award chart. Must be good news for those looking to transport mail order brides!

Does this affect the Turkish deal, or is this just about applying United miles to other airlines?

This is about using United miles to book awards on other airlines (though the lack of those award charts also means it may become increasingly difficult to spot what true “saver” availability is for United).

The two are not related. This is about using United miles to fly other airlines.

what is the Turkish deal

He means the fact that Turkish charges 7.5K miles each way for domestic Star Alliance awards, which means that you can book one-way economy class within the United States (including to Alaska or Hawaii) for 7,500 miles each way or in business class (if you can find availability) for 12,500 miles each way. That is when booking through Turkish with Turkish Miles (they are a 1:1 Citi transfer partner). The key is that you need to find United saver award availability in order to be able to book with Turkish. Today’s news doesn’t directly impact that. Here’s a post about that sweet spot:

However, on a broader scale, variable pricing with all partners makes the “saver” price easier to hide as people become accustomed to awards being any random price. In order words, we may see less and less “saver” pricing so as to make the variance less dramatic. We don’t know that will be true.

Still, that won’t really have a huge affect on domestic awards booked through Turkish. Where I suppose it could be more of an issue is that Turkish also has a sweet spot for Star Alliance business class to/from Europe (45,000 miles each way). By eliminating the standard price of a partner award, United frees up extra room for price flexibility on their own flights, which may in turn reduce United saver availability that is available to partners like Turkish for those 45K awards to Europe (again, using Turkish miles).

What I mean to say is this: as of a few days ago, partner business class to Europe was 70K miles each way. Flights on United metal were I believe 60K each way when “saver” space is available. Sure, United’s pricing is variable, but if they wanted to be competitive with partner space, they didn’t have a lot of room to vary between their “saver” price and 70K. If they get rid of that 70K barrier and can price partner awards anywhere they want, it makes it easier to justify some price for the United flights that is higher than saver level and therefore makes that space unavailable to partners.

That’s a lot of speculation though. I imagine that in the short term, we won’t see a huge affect since so relatively few people will be booking anything anyway. But in the long term, this is probably bad news.