Awards for flying Air France and KLM can be booked on Virgin Atlantic’s website.  You can even book Air France Premium Economy online, and I found that those awards were wide open on the routes I checked.  More on this below.

Another great way to earn miles is with the Virgin Atlantic credit card which earns 1.5 miles per dollar for all spend in addition to incentives for high spend.  For an in-depth analysis of this card, see: Virgin Atlantic World Elite Mastercard Deep Dive: Maximize Earnings and Status.

Virgin Atlantic also has low award change and cancellation fees. Virgin Atlantic charges only $50 per passenger.  Even better, on awards that incur less than $50 in taxes and fees to book, you’ll lose those fees, but you won’t have to pay $50 to cancel and get your miles back.

You can also use Delta SkyMiles to fly Virgin Atlantic, Air France, or KLM.  Delta doesn’t publish an award chart, so I recommend searching for these awards via Delta.com to find pricing for the dates you intend to travel.

Browse to virginatlantic.com and enter your origin and destination airports; select “round trip” or “one way” (I recommend booking one-way awards); select your travel dates, and the number of passengers.

Click the “Advanced search” link, then select “Miles” under “How Are You Looking To Pay?”  Then choose whether to search for Economy, Premium, or Upper Class seats.  At the time of this writing, you can book Air France Premium Economy with Virgin Atlantic miles, but not with Delta or KLM.  With any of the three airlines, you can book economy or business class (Upper Class).

Not all flights and seats are available to partners, so there may be days with no seats available at all.  Or, if you’re lucky, you may find the exact flights you need.  Most often you’ll find a week long calendar view:

If your initial search doesn’t reveal useful results, switch to the full 5 week calendar view.  Click “Calendar view” from the one-week result screen, to get to something like this: If needed, use the filter drop-down to filter to only direct flights.

Select and book your flight

Once you find a date that has award availability, click the link within that date to see available flights.  Here’s an example showing Air France flights from Atlanta to Paris: Dealing with online bugs and limitations

Pay with Miles is grayed out

If the website only lets you choose “Pay with card” and not “Pay with miles,” the workaround is to temporarily changing the flight destination to London (LHR).  It will then be possible to select “Pay with miles”.  Then change the destination back to the one you want.  Note that other settings may have to be re-established as well (such as the number of weeks to search).

This problem used to happen regularly, but it seems to be mostly fixed.  Still, if you type in your destination city and the text box doesn’t auto-complete, you have two options:

Many foreign airports aren’t loaded into the Virgin Atlantic system. If you want to book flights to one of these airports, it can’t be done online.  You’ll have to contact Virgin Atlantic to book those flights.

If you can’t find complete your booking online, you’ll have to contact Virgin Atlantic.  Below you’ll find Virgin Atlantic Flying Club’s contact information.  Please note that you can text them if you prefer not to call: Air France doesn’t publish award charts so it’s hard to compare apples to apples.  Instead I picked a route to compare…

I converted award fees priced in Euros to US Dollars:

Conclusions from this one example:

From the one example shown above, it appears that Virgin Atlantic offers much cheaper Premium Economy awards.  That said, Air France’s award prices fluctuate based on unknown factors.  One interesting thing I’ve seen with Air France, is that it is often cheaper to fly farther.  For example, it may be cheaper to fly from Rome to Washington DC via Paris than to fly non-stop from Paris.

In general, I recommend always comparing award prices and fees through both programs before you transfer points into either program.

You can find Virgin Atlantic Flying Club partner information here.  The partners listed as “Earn and Spend” are those where you can use Virgin Atlantic miles to book awards on the partner airline.

Virgin Atlantic offers different award prices depending on whether you fly during standard or peak dates.  Here are the current dates for each for Air France and KLM flights:

This is special.  When using Virgin Atlantic miles with Virgin’s own flights or with most other partners (including Delta), the award price is calculated for each leg of the journey and then added up.  For example, if flying Delta from New York to Los Angeles, with a layover in Detroit, the economy one-way award price would be 25,000 miles: 12,500 miles to fly NYC to Detroit plus 12,500 miles to fly Detroit to LA.

When flying Air France or KLM within Europe, the following short haul pricing applies.  It’s great to see that you can fly one-way for as few as 4,000 miles (4,500 Peak):

Virgin Atlantic’s award charts for Air France and KLM are extensive.  For those looking to fly between North or Central America and Europe, I pulled out the relevant award prices.  Note that you can book Premium Economy on Air France flights, but not KLM.

The following are one-way prices:

Complete award charts can be found towards the end of this post.

Fuel surcharges are imposed along with other standard fees (such as airport departure fees).  Fortunately, these fees are far lower than what Virgin Atlantic charges for flights to and from London.  Compared to using Virgin Atlantic miles to fly Delta, the news is mixed.  Flying Delta from the US to Europe (other than London) costs only $5.60 in fees with Virgin Atlantic, but flying in the other direction results in fees similar to what you’ll find with flying Air France or KLM.  As a result, the ideal path in many cases is to use Virgin Atlantic miles to fly to Europe on Delta and to return on whatever is available: Delta, KLM, or Air France.

Through a number of award searches I found the following fees between the US and Europe.  Note the the actual fees will vary depending upon the route you fly.  Also note that I’ve estimated some of the fees based on current Euro to US Dollar exchange rates…

Here are a few award results showing these fees:

The following are the complete zone based award prices for using Virgin Atlantic miles to fly Air France and KLM.  All prices are one-way.  Note that Premium Economy awards are not available on KLM.

Flights that don’t qualify for short haul pricing are priced based on zone to zone award prices.  Virgin Atlantic defines the following award zones for Air France and KLM flights: (EXPIRED) 20% transfer bonus to Flying Blue from Capital One 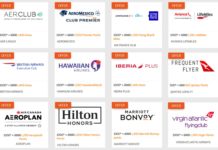