If you were due to fly with Southwest this past weekend, my commiserations. That sadly included my in-laws who came out to join us at the International Balloon Fiesta in Albuquerque, NM. 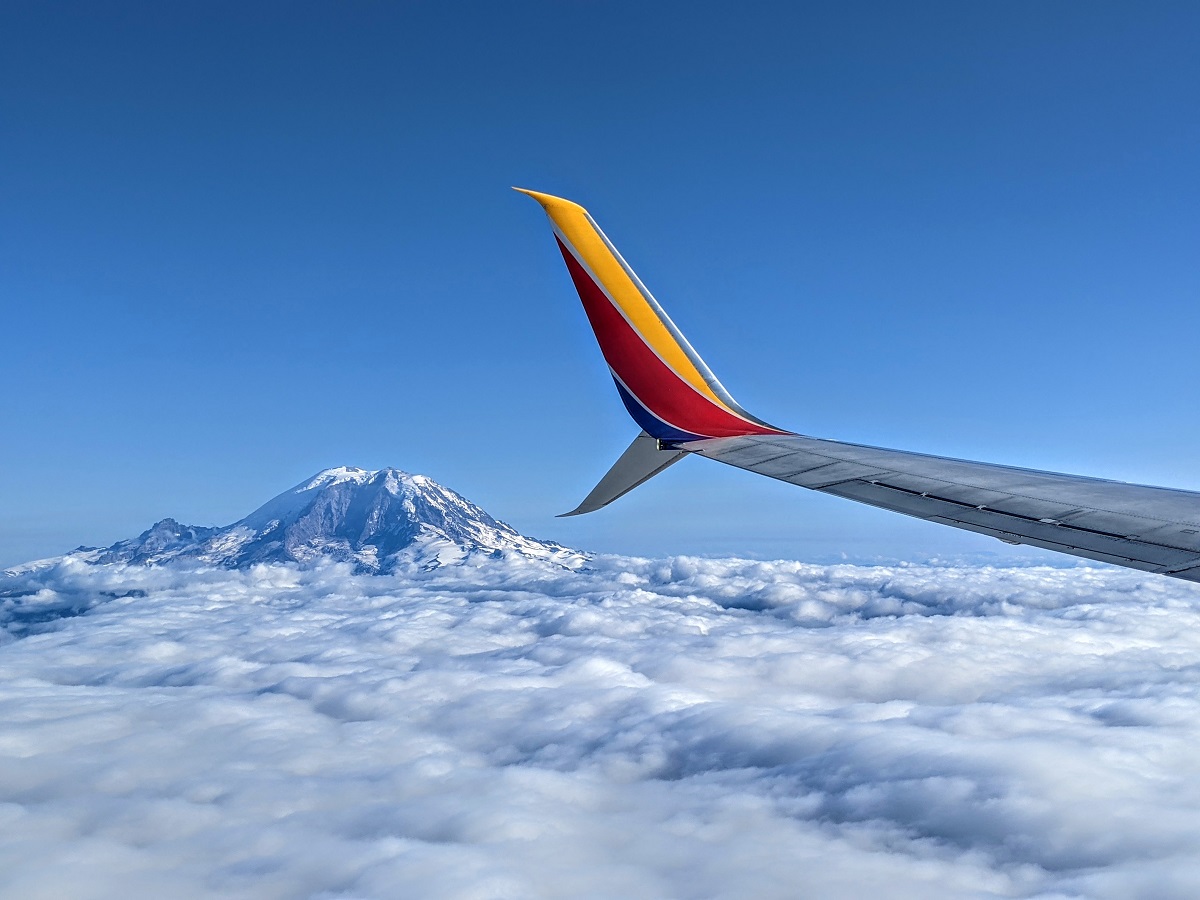 They flew back to Norfolk, VA on Saturday via BWI. Shortly after their flight left from Albuquerque to BWI, I received a text from Southwest advising that their BWI-ORF flight had been cancelled (I’d used my email and phone number for the booking so that I could sort things out in case there were issues such as these). Going online, there were no other flights available from BWI to Norfolk that evening, so I tried booking them a hotel at BWI that night to give me time to look at options for getting them back home.

That in itself was a struggle as pretty much every hotel near BWI was fully booked. There was a Marriott that supposedly had two rooms available, but that was fully booked by the time I tried making a reservation.

In the end, the best I could do was a Motel 6 that was 10 miles from the airport. Shortly after that, Southwest texted to say that my in-laws were rebooked, but for a flight on Monday – two days after they were due to get back. That wasn’t ideal due to work commitments and having to pick up their pets, so they arranged for a friend to drive up to Baltimore on Sunday morning to pick them up. Thankfully I received another text from Southwest later that night advising that they’d been rebooked once again, this time on a flight on Sunday morning and so they were able to let their friend know they didn’t need a ride after all.

As far as I’m aware, they didn’t make a complaint to Southwest and neither did I. It was therefore a pleasant surprise when I received an email from Southwest this afternoon apologizing for the delay and advising that they’d be sending two $250 LUV vouchers towards their next flight.

These will be sent in a separate email within 10 business days, so if you were caught up in the delays/cancellations over the past week or so, keep an eye out for emails from Southwest as you’ll hopefully receive something similar. How are you all making these complaints? Email (which email)? Phone? Online chat?

I was given $200 at the airport, another $200 because my bags were delayed and I had to pick them up, $75 to cover the purchase of my incidentals, and then another $250 via this email. My original ticket was 10k in points. I was routed to another Socal airport which added an hour to the roundtrip for the person picking me up. Beginning to end the employees at Southwest were caring, respectful, and kind. They did all that they could to help accommodate us with the issues going on that day.

I have had great luck using twitter to message SW about changes or issues. I would recommend that over a phone call any day.

This could get interesting for us as our December Hawaii trip approaches. We used $1400 in Luv vouchers to book these flights and I’ll hate getting mixed expiration vouchers back if they haven’t figured their crap out by then…

Same. In fact, I will lose $380 in total vouchers (3 of us) because of the canceled flight last wknd. I need those extended along with fair compensation. We have East coast to HI r/t flight in December too. Really worried.

I’ve always wanted to go to the International Balloon festival. Would you be willing to write a review about how it is and give us some tips for booking hotels? Thanks.

I’ll be writing about it on my own blog – I’m not sure if I’ll be covering it here or not.

As for hotels, any of the three Hyatt properties would be a good option as they’re all only 5,000 points per night. If you’re considering going next year, I’d book them ASAP a) because they could get booked up quickly and b) Hyatt is implementing category changes and peak/off-peak pricing very soon. I imagine that all three of those properties will be peak-priced for the Balloon Fiesta, so booking now will lock in the lower rate.

Our PIT-SLC flights were cancelled Sunday. No SW flight available for two days, so I had to spend 30k United points to get two of us home. I complained and got one $150 voucher to cover two passengers. Maybe there lesson I’m seeing here is DON’T COMPLAIN and you’ll get a better voucher?

I find this situation rather confusing. Direct flights for my family of four on Saturday from San Diego to Tucson were cancelled. All other flights from SAN to TUS were also cancelled, and we were re-booked for the following Monday, That didn’t work for work-related reasons, so I found flights for Sunday. The confusing part was that my 10-year old son was on a separate unaccompanied minor reservation (due to expiring travel funds), and my wife and 7-year old daughter (companion pass) were on a third reservation. Due to these complications, I had to cancel these tickets (3 x $79) and re-book new tickets (3 x $279). Also, I had booked these flights initially, rather than just deciding to drive the 300 miles between the two cities, to take advantage of the promotion to earn a limited companion pass from January to March 2022. So I paid $600 more and lost the companion passes. I have received one $100 voucher so far, perhaps additional vouchers will arrive for the other reservations. I think Southwest is trying to do the right thing, so am undecided as to whether to ask for additional compensation, Any advice?

It certainly doesn’t hurt asking for more compensation. One thing I was unclear about is if you proactively cancelled the additional flights before Southwest changed them for your family members. If you did, that might make them less likely to offer compensation, but again it doesn’t hurt to ask.

Also, do you live in San Diego? If so, I’m wondering if they offered you less compensation than my in-laws because you wouldn’t be stuck away from home due to your flight cancellations, whereas they had to book a hotel.

Thanks for the helpful response. We cancelled our flights after Southwest changed them. The problem was that we weren’t able to just change flights assigned by Southwest to new flights (without incurring any costs) because of the issues involving the unaccompanied minor reservation and companion pass reservation, so we had to cancel and re-book. Also, we were flying home to Tucson from San Diego. I’m contemplating claiming travel delay coverage from my Platinum card to cover the extra hotel night. Thanks again for the helpful advice.

Some crazy “weather” out there!

My son and I had a flight canceled on Sunday, and it was a nightmare getting it rebooked for Monday. I sent an email and received 1 $150 voucher which I am not happy about.

Hold up. I wrote to SW and complained because my family missed a vacation to Florida AND lost money on deposits and spent 5hrs in the airport as our second flight was canceled too. We got ONE $150 voucher for my complaint. Three people- one voucher. Why would SW be treating people differently?
P.S. thank you for the article. I had emailed Frequentmiler and requested this type of article (asked for an idea of how SW compensated in June so that we knew what to expect.)

Sorry that your family went through that. I’ve no idea how they decide on compensation – I don’t know if it’s based on the original ticket price and/or whether you’re stuck away from home or not.

It might also be that these delays have gotten a lot of media attention, so they might be compensating customers more than usual to try and mitigate that.

One of my friends received a voucher at the airport but also received the $250 voucher. So maybe keep an eye out for that.

Man- the airport lines were insane and I wanted to leave that to anyone who had a higher priority reason to fly than me and my family trying to enjoy a touch of sand and sun. But an airport voucher and a $250 sounds nice!

Complain again. And again. I’ve had luck getting nearly my full flight value back

The same thing happened to us. There were 5 of us (me, my wife and 3 kids) and we were stranded in Omaha for 48 hours and found out the morning our second flight was supposed to go out that it was canceled as well. I found another SW flight home to Las Vegas airport and booked it with $1500 because I didn’t want to be stranded longer in Omaha. I sent them the entire story and confirmation numbers and got a $150 voucher as well. I called and they said that was just an “initial” voucher and more should be coming, but the email sure didn’t sound like that was the case.

I tried calling and I was on hold for 2hrs45mins before I hung up. Glad you got through and thx for sharing some hope!

I still have a flight that needs to be canceled since we never made it to our destination, so I’m planning on calling again to try to at least get a refund for the points I spent on the original flights.