Update 7/7/21: Readers are reporting that points are now finally posting, including from transfer requests that were submitted several weeks ago. That hopefully means that whatever the issue was on Citi’s end is either in the process of being resolved or has been fully resolved.

Update: My transfer from Capital One posted instantly. This is definitely an issue on the Citi side only and as per comments it is affecting other loyalty programs also. It may be wise to hold off on any transfers from Citi at the moment.

Mark this story as “developing”, but I thought it was worth a cautionary post. We have now had a handful of reports from readers who have made transfers from Citi ThankYou points to Turkish Miles & Smiles but that the miles have not shown up on the Turkish side. Several readers have very similar data points of making a transfer almost two weeks ago, having the points deducted from Citi, but then never seeing the points show up in their Turkish Miles & Smiles accounts. That’s obviously very frustrating to say the least, so it might be wise to hold off on making a transfer until we see some resolution and/or positive transfer data points.

I first received an email about this situation about a week ago, but believed it to be an isolated incident. Then yesterday I saw another data point in Frequent Miler Insiders, so I put out a call for additional data points.

We had one reader who reports having successfully made a transfer two weeks ago, but a few others who report having initiated a transfer between 6/20-6/23 that still hasn’t shown up on the Turkish side. Frustratingly, Citi is saying that transfers can take up to 14 days and that a dispute can’t be filed until that much time has passed.

It’s worth noting that a couple of people experiencing this problem report that they have made multiple transfers to Turkish in the past without an issue, so this isn’t a case of people typing in the wrong account number or making some other type of user-error. At least one member of our Facebook group put in a second transfer earlier this week to see what would happen and the points still haven’t posted on that transfer, either.

In the past, transfers from Citi to Turkish have taken between 18-36 hours, so this current timeline definitely seems to indicate a problem somewhere. I’m not sure what to make of the one data point we have from a successful transfer two weeks ago as it seems all of the other data points we have from the past two weeks are negative. That said, we’re working with a very small sample size and would appreciate reader input. If you have made a transfer to Turkish Miles & Smiles within the past two weeks, was it successful? When did you transfer? From Citi or Capital One?

Ordinarily, I would hold off on posting until I had some more data points indicating a problem, but in this case I thought it was worth a quick note of caution rather than letting more and more readers end up in the same frustrating circumstances. Until we receive some positive data points, I’d recommend holding off on transfers to Turkish unless you can afford to float the points for a while. That is to say that if you don’t need to make a booking of imminent importance and/or you have other points or miles you could use in the meantime, by all means feel free to make a transfer and keep us updated with your data point. But for those who just have enough points for the booking they need, it might be wiser to wait.

At this point, I have only seen data points on this from Citi to Turkish. I’m unsure if Capital One transfers are experiencing the same problem, but I just now initiated a small transfer from my Capital One account as a test to see what happens. Again, if you have a pertinent data point about a recent (within the past two weeks) transfer, let us know in the comments. Lap infant sweet spot: Turkish charges 10% of the miles for a lap infant Turkish now has a checkout button for Star Alliance award tickets (but does it work?) 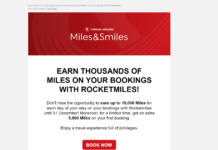 Anyone having TK transfer problems? Been trying for days and no luck. TYP Agents useless. Gives ‘check your info’ error. I’ve done multiple transfer to TK in the past.

I transferred yesterday and the miles showed up in Turkish today.

Transfer from 6/19 postedto Turkish this morning.

Mine did also. Transferred on 6/22

My transfer is still waiting from 6/25!

I initiated a transfer on 6/30. Tody is 7/4, points are still not showing up in Turkish account. My hold for a United flight has already expired. Very frustrating since those award spaces are gone for my date on United.

Data point from a few years ago: I set up Citi TYP transfer to Flying Blue. After a month I got a message from Citi saying the transfer failed, and they redeposited my points. A couple days later I got an email from Flying Blue telling me about all the things I could do with my new miles. So, fingers crossed that there is a silver lining to all of your delayed transfers!

UPDATE: I spoke to Citi ThankYou desk this morning. They actually acknowledged the problem, and the person to whom I spoke said that transfers from 6/20-26 are having difficulties. She offered to re-deposit my points so I could try the transfer again. I asked for a supervisor, and he said that he’s not sure that transfers initiated now are going through, so trying again might not help. He said the problems are occurring between Citi and Turkish and at least one other airline. He further said that Citi has filed a complaint with the “transfer network” (sounded like a company that handles these things?) and they should know more soon. For what it’s worth…

I need to cancel my citi card this week to avoid the af. But my 50k miles have not posted. If I cancel the card will I lose the miles will they ever post then?

I put in the request 4 days ago and still not showing up. Do we know if this is also happening if you were to transfer from other partners?

I transferred 30,000 Citi ThankYou points to Singapore Krisflyer on June 21, and they still haven’t posted.

Made a request for 23,000 points from Citi to Turkish air on 6/25 and no points showed up yet. I got in contact with citi and they said that the issues were with Turkish not citi. Take that with a grain of salt but that’s what they said

Yeah, that’s not it. My transfer to Turkish from Capital One was instant. And between the comments here and in our Facebook group, people have reported this same problem from Citi to Singapore, EVA, LifeMiles, Qatar, and Emirates. Definitely seems like an issue on Citi’s end.

I agree that I think it is a problem with Citi, but their exact words to me were “the points have been deducted from your account and sent to Turkish Airlines. The points are currently pending acceptance from Turkish Airlines”

Yeah that’s a lie… they just don’t want to admit they are responsible.

I transferred my points over a week ago. Still waiting.

Just to add: I’ve called and cancelled my reservation and then immediately rebooked a total of five times. It’s far easier if you get an agent who is relatively fluent in English. Otherwise HUCA since they won’t understand. I just give them the Turkish confirmation number and ask them to cancel and rebook. Gives me a few extra days each time which I’m waiting for this fiasco to clear up.

I called as well trying to cancel and rebook. But the agent said there was nothing to cancel since it was not paid yet. The weird thing is, after the reservation hold expires, Turkish site shows -1 day until final payment.

experiences seem to indicate this started around June 20th. What day did you do your transfer?

Transferred 30k from Citi to Turkish 6/21. Submitted a trouble ticket/“feedback” 6/29. “Feedback” acknowledged, but not yet resolved, 7/1. Goodbye reservation hold.

Agent 2: Reservation expired. Need to rebook, but flight shows cancelled by UA. Transferred to customer relations. Transferred back to ticketing…

What is it with this airline?

Next step, call Citi TY and ask for courtesy points. Did someone mention there’s a data point of 30k?

I transferred TY to Turkish on 6/24… still nothing. Citi refuses to acknowledge there is an issue until it’s 14 days.

I work with some major Fortune 500 companies that offer loyalty points and let me tell you that the process is not nearly as efficient as you’d expect. First off, if the process is near-instant then it’s because there’s an API between the two databases that’s able to reconcile the points transfer automatically. But if there’s a delay of any kind of transfer it’s because that process is manual. As in somebody emailing a spreadsheet and doing a manual entry or upload on the other side. All it takes is for someone to go out on vacation or be out sick unexpectedly and then the entire process gets delayed, like you’re seeing now.

Same problem. Transfer from Citi to Turkish on 6/19 hasn’t posted. A second similar transfer on 6/23 also hasn’t posted. Citi has been awful about it, although I found one sympathetic support person who submitted a case a week ago. Of course, still no response.

I did receive email confirmations from citi immediately after placing the transfer order. And I have transferred successfully once before from citi to Turkish.

This is definitely Citi related and very widespread. On 6/21 I requested to transfer miles to EVA Air and to date it still has NOT posted. The only thing that keeps me calm is seeing that I’m not the only one in this situation.

It’s not just Turkish. I have had issues with qatar airways as I transferred over points a week ago and have not seen my points post in my qatar airways account. Additionally about a week and a 1/2 ago I was transferring emirates miles and was having a hard time as well. Those miles ended up posting….

Def something to do on citi’s end.