During my recent stop in Muscat, Oman on our 3 Cards 3 Continents trip, I spent at night at the Grand Hyatt Muscat (before snorkeling with whale sharks and sea turtles off the coast of Oman!). This hotel certainly is a a grand-looking space and I was given a very spacious suite upgrade as a Hyatt Globalist. The property is showing some wear here and there, but it can be a good value whether with cash or points and I’d likely stay again the next time I’m in Muscat. The Grand Hyatt Muscat is an impressive-looking space on the grand scale, with gorgeous floor to ceiling windows in the main restaurant / breakfast area, a decent pool area, and spacious guest rooms. The public spaces in this hotel definitely evoke a feeling of grandeur. If you look closely, you’ll see signs of wear — paint or carpet that could use some maintenance here or there — that make for a less immaculate impression on further inspection. However, I still found this property to generally meet Hyatt expectations in terms of service and quality and I’d likely stay again over paying more to stay at one of the Marriott properties in the city — with one exception. I’d love to have been able to book the Ritz-Carlton Al Bustan Palace via Amex Fine Hotels & Resorts. Go ahead – Google pictures and you’ll see why. At $300 per night plus taxes bringing the total up to $368, that property is far more expensive than the Grand Hyatt and a completely unfair comparison, but it’s worth noting that I’d probably spend at least a night there the next time I’m in Muscat.

In that regard, I was surprised by the relatively few chain hotel options in Muscat. While most chains had a property or two, the options felt more limited than I’d have expected. For instance, the only Hilton property was a Hilton Garden Inn (I originally considered staying there at just $73 per night all-in or something like 17K points). There were only 3 Marriott properties, all of which were more expensive than the Grand Hyatt. Again, there were a handful of options, just fewer than I expected before researching options. The Grand Hyatt therefore stood out as a good full-service hotel option at a solid value price whether with points or money. 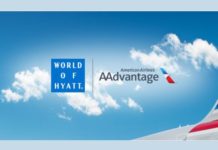 Hyatt Sale: up to 20% off paid stays worldwide with promo code UNLOCK

Was there last month as well and stayed in the 1-bedroom suite. You’re right that it’s showing it’s age a bit and the decor/style is a bit ‘outdated’ and the breakfast buffet was decent but nothing that stood out. The positives was the great pool and beach access as well as the lounge’s evening reception. While the quality of the alcohol was nothing to write home about, something I also noticed at the Conrad in Dubai, the food selections each night was very nice in terms of quality and quantity. Yes the area is not close to any sights but we took the local version of Uber/Lyft without any issue and it was dirt cheap; don’t take the taxis at the hotel as their prices can be 2-3x the price. There are plenty of decent restaurants in the area all within walking distance, including the Persian place across the street. Best meal of the trip!

I stayed in this property a few years ago and liked it very much.The Arabic decor is interesting. Muscat is a great town to drive yourself around and the free parking at the hotel was convenient. The area surrounding the property makes for a pleasant stroll. I do remember the wine in the evening lounge reception to be bad but, hey, you’re in the Middle East, so it’s hard to expect better (although the booze in the Aqaba Jordan Hyatt lounge IS good).

I know you’re not a fan of Marriott but you shouldn’t dismiss the W Muscat. It’s a beautiful, modern hotel with a great location. Wonderful breakfast buffet, great pool and beach area and a really amazing rooftop bar/restaurant that covers a whole wing of the hotel and has a very cool rooftop infinity pool. Right across from Royal Opera House.

Sheraton in Muscat had the BEST breakfast I’ve ever had anywhere in the world (including St. Regis, Conrad, Park Hyatt Vienna/Paris etc) so if you love breakfast, this is the hotel for you. Everything else was amazing too. It was so good, I stayed there twice.