Wyndham Rewards terms and conditions indicate that points expire 4 years after the year in which they are earned regardless of activity (and after 18 months if you have no activity). In other words, it has long been thought that Wyndham points have a hard 4-year expiration with no possibility for extension. However, today we received a second data point from a reader who was indeed able to get a new 4-year extension after the points expired. This is “iffy” since it involves waiting until after the points expire and it isn’t something in the official rule book, but a couple of positive data points indicate to me that there is at least a method to make this happen and it may be worth a swing for those with recently-expired (or soon-to-expire-unused) Wyndham points.

About six months ago, reader Pam commented on a post about the new Wyndham credit cards to say the following:

DP – I previously had some WRs [points] on the brink of expiration. The Wyndham rep told me to let the points expire and Wyndham then put them back in for another 4 yrs. They otherwise will not extend. It worked, but I can understand someone’s hesitancy with doing this esp considering Wyndham has overall poor customer service. I only had about 20,000 points so was willing to chance it.

My first thought on reading that is “Did Wyndham hire someone from ANA Mileage Club to handle their point expiration policy?” (since regular readers will know that Greg recently found himself in a similar boat of having to wait for his ANA miles to expire and disappear before they would reappear with a new expiration date). Letting your points expire in order to extend them feels risky.

But then reader jeph36 commented today with a similar (though I think slightly different) data point:

As a Wyndham-points FYI for anyone who might be in a similar boat as me: I had ~37K points that expired due to the 18-month clock in Oct 2020. Based on info from somewhere in the blogosphere, I asked and got them reinstated in Feb 2021. The app shows me that they have a new 18-month clock (expiring 2022-08-02 without any activity) and a new 4-year clock (expiring 2025-02-28 regardless). I could not find this info on the website, but it is at the bottom of the Android app of the “My Account” section.

In jeph36’s case, it is clear that the points were expiring because of 18 months of inactivity. My impression of Pam’s data point was that the points were expiring after 4 years of being unused (though re-reading her comment, that isn’t entirely clear either). What is clear to me is that in both cases they report the reinstatement giving them a brand new 4-year clock. That’s a positive end result that I imagine may at least interest those whose points expired during the past few months while they were unable to travel because of the pandemic.

Again, it isn’t entirely clear that simply waiting until they expire 4 years after they will earned will work for this, but if you can get points expired for inactivity restored, I think it would be worth a call however your points expired because Wyndham clearly has a method for resurrecting expired points. If you do have success or failure with this, please share your data points. If this is indeed a way to extend the points anew for four more years, that would make collecting Wyndham points, whether via their credit cards or Capital One transfers or purchases when on sale a much less risky proposition. On the other hand, I’d be hesitant to let any significant number of points expire while hoping for this to work – I’d at least want to get a Wyndham rep on a recorded line telling me that this is how it is going to work, so it may be worth a call in advance if you’re nearing expiration. 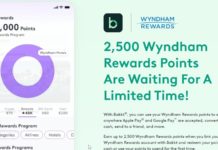 This is what I followed: https://www.doctorofcredit.com/wyndham-points-expired-heres-how-to-fix-the-issue/
This suggests this is only a covid thing. And the comments say the Caesers trick is only for up to 30k … but better than nothing?

Did it extend your 4-year expiration date or only the 18-month clock?

Both. Because only the 130 points I didnt transfer since it was less than 1000 are still showing to expire in less than 4 years.

I think this works on up to 30K WR points per year. I wrote about the process a few weeks ago: https://travelwithgrant.boardingarea.com/2021/03/02/redeem-wyndham-rewards-points-part-2-transfer-times-to-from-caesars-rewards-extend-expiration-date/