A few nights ago I overheard an elderly woman at a restaurant talking about Marriott: “Now they call it ‘Bonvoy’. I hate that name.”  Agreed.  We hate it too.  All of us.  Not only do we hate the name, but we hate the TV commercials where happy travelers loudly proclaim the nonsense word: “Bonvoy!” They want you to hate the commercials

I remember a time in 7th grade where a substitute teacher asked our class what we thought about a particular TV commercial.  We all agreed that we hated it.  The teacher then told us that the advertising agency wanted us to hate it.  The more we hated a commercial, the more likely we were to discuss it with friends.  Long before social media existed, advertisers had found a way to make their ads go viral: make them repetitive and as annoying as possible.

Fast forward about 40 years and now we have the same thing happening with Bonvoy!  It’s repetitive.  It’s annoying.  And we’re all talking about how much we hate it.  Success?

I think of the Marriott Rewards / SPG program merger as one of the worst executed loyalty mergers ever.  That’s saying a lot given how poorly many airline program mergers have gone.  Marriott forced the merger through far earlier than they were ready for technically.  Worse, much worse, was their customer support.  Time after time, Marriott reps told the media one thing, while those on the ground understood the opposite.  Customers were left with nothing but frustration.

When Marriott renamed its rewards program to Bonvoy, they inadvertently gave name to our displeasure.  More and more, when things go wrong with Marriott, we say that we’ve been Bonvoyed.

I believe that most (but not all — not by a long shot) of the technical merger issues have been fixed.  By “fixed” I mostly mean that Marriott Rewards…, er… Bonvoy, now works pretty much just as good or bad as it did pre-merger.  You might not remember this, but the Marriott status quo, pre-merger, was that their technology was really bad.  Lots of things went wrong.  And now, lots of things continue to go wrong with the platform, but they happen equally across legacy SPG, Marriott, and Ritz properties.  The difference is that we now have a name for things that go wrong.  Bonvoy!

And, of course, there have always been issues at various hotels.  Some hotels are better managed than others.  Some staff are better than others.  Sometimes bad things happen that are outside the hotel’s control.  All of these bad things happened at SPG properties too, but many SPG die-hard loyalists may choose to forget them.  Regardless, when things go wrong in the new merged program, we now have a name for our displeasure.  Bonvoy!

Merriam-Webster defines meme as “an idea, behavior, style, or usage that spreads from person to person within a culture.”  I believe that’s happening here with “Bonvoy”.  The usage (“I’ve been Bonvoyed!”) is spreading from person to person.  It’s now a meme, but not the meme that Marriott wanted.

On the one hand, the marketing geniuses behind Bonvoy may be proud.  Their goal, undoubtedly, was for the name to spread.  And, I’d guess that they knew we would hate the commercials, and they hoped that this hatred would lead to the viral spread of the new name.  In that, they succeeded.

The problem is this: It’s one thing to have customers hate your commercial, but it’s quite another for them to hate the brand.  And I believe the latter is what is happening.

Before Bonvoy, when things went wrong at a particular hotel, we usually thought of it as a problem just with that hotel.  Now, we name it.  We were Bonvoyed. That reinforces an overall negative view of the brand.  At some point down the road, this may lead many people to have an “anything but Marriott” approach to picking hotels.  Worse for Marriott would be if large corporations back away from Marriott in favor of Hilton, IHG, or others.

Will it spread beyond Marriott?

There’s a small chance that the negative usage of “Bonvoy” will spread beyond Marriott.  I can imagine a future where we say we were Bonvoyed anytime a big organization screws up to our detriment.  American Airlines cancelled your flight?  Bonvoy!  Uber overcharged you? Bonvoy!  Your Hilton account was hacked? Bonvoy!

I think it’s unlikely that the negative connotation will catch on beyond Marriott, but if it does that might help Marriott drag itself out of this hole it has dug.

As a long time Marriott elite member, I actually think that things are better in many ways than they were before. For example, many more hotels offer free breakfast to 50 night elites than they ever did before.  Point earning rates are better too… at least when the points are awarded correctly (which is surprisingly rare).  For most people, though, the enhancements are lost in the Bonvoy storm.  We can’t possibly remember the few good things when we are constantly reminded of the bad… by Marriott’s own commercials. 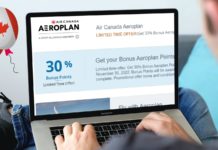 Chase’s 30% transfer bonus to Aeroplan is awesome, but I’m not buying [On my mind] Bummed by the Bonvoy Brilliant [On Greg’s Mind]

[…] from Frequent Miler wrote about the Bonyoy name Marriott has picked for its loyalty program. Did they intend for it to be different, or even annoying, to make people talk about it? Whatever […]

Did you just use a YouTube video thumbnail as a static image with a hyperlink to the video? I was really confused, lol. Why not embed it?

I created a new image from the video and used that because I wanted that particular picture.

I can tell you talking to avid business travelers that were Marriott loyalists, I’ve heard little to no complaints about merger issues. Talking to SPG loyalists, they have lots of bad things to say. I’m neither because I don’t travel as much for work anymore, but seems a lot of the negative or positive perception in the masses stems from which program they were in originally. Not to discount all the awful things this merger has heaped upon travel rewards enthusiasts, but that group is really representing a very loud minority. In the end I don’t believe this will hurt Marriott’s bottom line in any noticeable way. With customer service still being off…We’ll see in time.

[…] On my mind (#Bonvoyed! edition) by Frequent Miler. Greg is right in that pre-merger a lot of things went wrong IT wise, the key difference is that the customer service department were given the tools to fix those issues without a long wait. I think the IT is still much worse than it was and customer service is almost extinct. […]

In Canada, we call it getting “ Rouged”. Very similar result

Two years from now, when Delta does another devaluation (sorry for picking on Delta) and the headlines read “Delta SkyMiles getting Bonvoyed!” then you can rest assured that the Marriott marketing teams will be high-fiving each other. Webster will define: “Bonvoy” as verb/noun/pronoun/adjective: To make suck.

I haven’t seen the ads, but that man’s sweet sweater makes me want to forgive them in advance.

‘The usage (“I’ve been Bonvoyed!”) is spreading from person to person.’

SPG was a great loyalty program. We all know that SPG points had real value. It’s not the case today. If Marriott wants us to earn their loyalty and their points than they need to make their points more valuable for both credit card spend and for stays. I no longer try to collect Marriott points.

I know it’s a real balancing act to have a good loyalty program. The brands that succeed are the ones that are more generous to their customers. If I was a competing hotel brand I would be making news with improvements to my loyalty program to grab ex-Marriott loyalist. This is the best time ever for competing brands to make some noise.

I’m a landlord u have to keep the place Full if u have to give a deal do it !! I stayed @ Kona Marriott for 3 nites with points then stayed another 5 after I found off what a great place it is (3.5*) .Then I came back 2x more .U need to get people IN and be nice to get people to come back .
CHEERs .

the mere mention of Marriott on blogs these days is met with instant hostility & derision – can’t imagine that’s what Madison Ave is in any way going for in the hospitality industry!

@Ron those are targeted promotions especially double elite nights, so if you’re not included like me, you’re #Bonvoyed and even less likely to stay with them.

Yeah – normally i am happy with the local hotels who get the points credited on time, but my experience with Autograph properties abroad and Gaylord properties at home are nightmarish. Stays not credited, then you need a copy of your folio that you never got, and it took almost 2 months to get a copy from the property …

MRR’s IT was always bad……but the CSR’s could usually fix things. Not true anymore

For me what I’ll never really forgive is how they screwed, intentionally, people with travel packages.

Greg,
Just to be the contrarian, while I get all the angst and frustration about getting Bonvoyed, I am all in with Marriott this year. Why, you may ask:
1. Current double stack of promotions- double elite nights and double points. I might make Platinum this year and get to use suite night awards for the first time.
2. All recent stays have been properly and promptly credited, including promotions.
3. Have had good luck with upgrades on check-in this year, even at Ritz Carlton.
4. Like the fact that the Bonvoy program remains essentially a transferable rewards program (like UR, MR, etc.) with all the airline partners. Complete flexibility with accumulated points.
5. Got the Ritz Carlton card last year (thanks to posts on your site) and have enjoyed the travel credits and upgrades to Club access. I think this is a keeper, for now.
6. They have hotels almost everywhere.
The transition was terrible. Marriott failed to credit cancelled stays, neglected to credit stays that took place, and info posted on the app or web site was sometimes wrong. These issues all seem to be slowly getting better. Finally, like every program that has a rocky transition, when some folks jump off the rest of us potentially benefit with the reduced competition for desirable rooms. Will be going to St. Regis properties in Bali and Puerto Rico for 60k per night or less. Now if I have to cancel a trip, who knows how long it will take to get the points back…