My wife and I have just completed the first year of our 5 year, 50 state road trip. During that time we’ve stayed in more than 60 cities, 47 different hotels, 18 Airbnb properties and with 5 sets of family and friends.

Hotel loyalty schemes have helped make the trip affordable as 129 nights at 24 different hotels were booked using points in 2018. I try to maximize our points as much as possible which means booking category 1 and 2 properties, taking advantage of 4th/5th night free benefits, promotions that reward you even on award nights and more.

We’ve therefore gotten outsized value from our points over the past year and I think we did better than the Reasonable Redemption Value on every award stay.

‘Best value’ is subjective, so I’ve calculated it as follows:

The first two points need clarifying a little further. ‘Average nightly rate’ is based on the lowest rate available at the time of booking the award nights and includes tax. In most cases it was a non-refundable prepaid rate as that’s usually what we book for paid stays to save money.

‘Net cost in points per night’ is based on a number of factors. It includes 4th/5th night free benefits, welcome amenity points, points earned from quarterly promotions and more. These factors differed by stay, so in each case below I’ve explained how this worked.

Without further ado, here are our 5 best value hotel award redemptions of 2018. 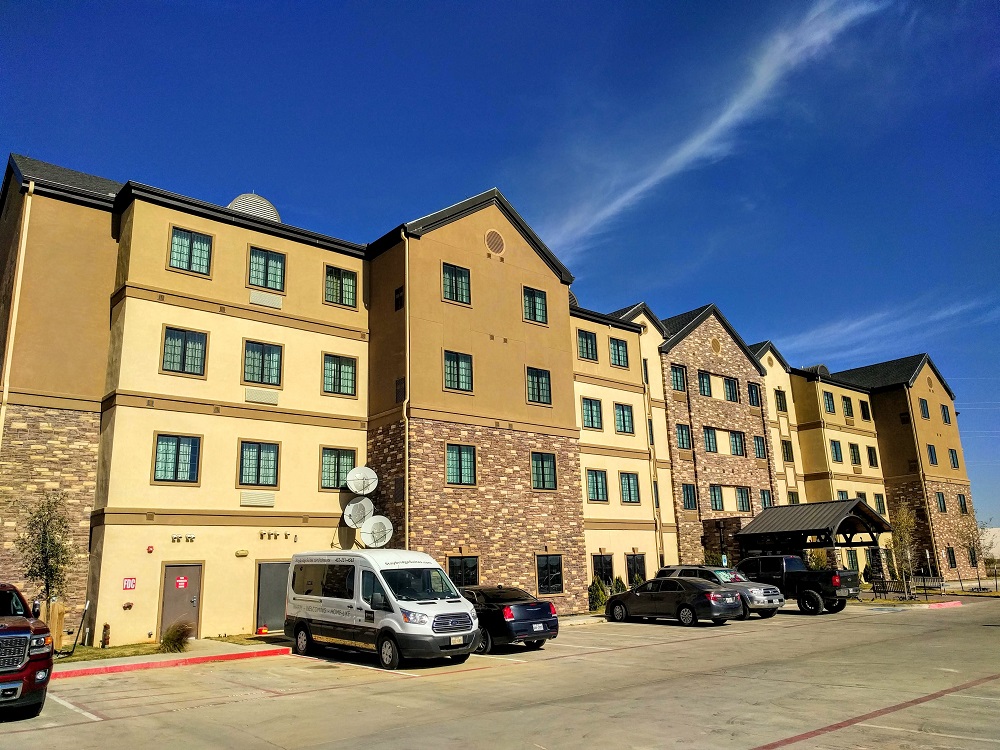 Somewhat ironically, our best value redemption was one of our least impressive stays of the past year. The hotel wasn’t great, while Odessa itself wasn’t worth visiting, although I did go to my first drive-in movie.

The main reason the overall value was so good is due to the ridiculously high nightly rate. Hotels in Odessa are expensive, apparently due to all the money from oil and energy companies.

Award nights on the other hand are incredibly cheap. That’s presumably because no one wants to visit Odessa. Well, except us (to be fair, we were warned). I’d originally booked a five night stay at the Residence Inn Odessa due to Marriott’s 5th night free benefit. The Staybridge Suites subsequently appeared on IHG’s current PointBreaks list for 10,000 points per night, so I booked a stay there instead.

Based on the nightly rate, that gave a value of 4.65cpp which is more than 8x the RRV. This is why ‘Best Value’ is so subjective – there’s no way I’d have paid $330 per night. Peoria rivaled Odessa for dullest city we visited last year, so it’s perhaps fitting it took the number two spot. The Candlewood Suites Peoria was a perfectly nice hotel though that gave us an upgrade to a one bedroom suite. This was one of only two upgrades we received with IHG in 2018 – the other upgrade was also at a Candlewood Suites.

Compared to the Staybridge Suites Odessa, the nightly rate was more reasonable. The points cost per night was lower too. Once again, that’s thanks to IHG’s PointBreaks list as it was available for just 5,000 points per night.

We stayed there back in July, so before I could take advantage of the 4th night free benefit from the credit card. The 10% rebate from their old credit card reduced the cost to 4,500 points per night. I received another 500 point welcome amenity which, split across our six nights, reduced the net cost per night to 4,417 points.

Seeing as we had to redeem so few points, we received 3.09cpp of value from them, or almost 5.5x the RRV for IHG Rewards Club. I’m glad the Hampton Inn Enterprise made it on the list as we loved our stay there. We visited Enterprise in March as it’s home to the World’s Smallest St Patrick’s Day parade. One person walks/marches/dances a block from the courthouse to the city’s Boll Weevil Monument (yes, really!) and back again.

That made our final value 1.50cpp, or more than triple Hilton’s 0.45cpp RRV. Who needs 0.5cpp Amazon redemptions when you can get value like this 😉 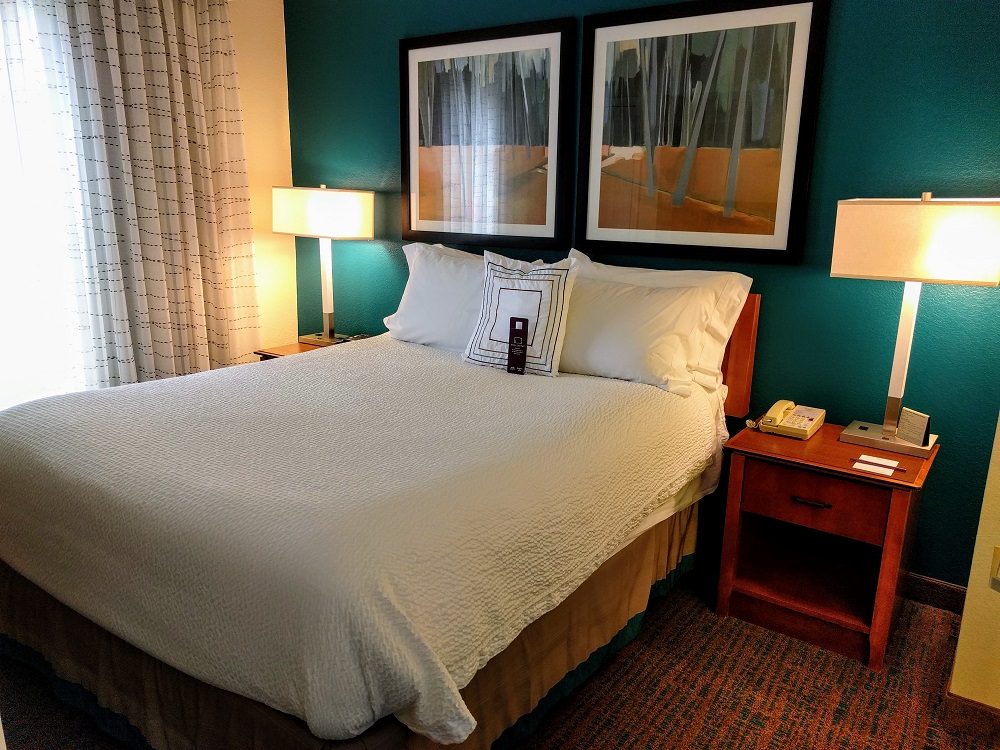 Before setting off on our road trip I never thought I’d say this: I loved Alabama. We stayed in six different cities over the course of a month and all of them had interesting stuff to offer, including lots of great hiking.

Our final city in Alabama was Huntsville where we stayed at the Residence Inn. When booking our stay, it was a category 1 property which only cost 7,500 points per night at the time. We stayed for five nights which meant the 5th night was free, so our net cost per night was 6,000 points. With a nightly rate of $138.85, we got 2.31cpp of value, or 3.21x the RRV.

Following Marriott’s devaluation, this property is now a category 2 property and so costs 12,500 points per night. That means you’re unlikely to get as good value as we did, but you’d still likely do better than the 0.72cpp Marriott Rewards RRV. As surprised as I was that I loved Alabama, I was equally surprised by how much I loved Tulsa. My prior knowledge of Tulsa amounted to Chandler not wanting to work there in Friends seeing as he’d Sooner be in any other state.

One reason we had a little leeway in our budget is because we booked the Hyatt Regency on points. It’s a category 1 property in the World of Hyatt scheme and so costs 5,000 points per night. That’s great value as it is, but it got much better for three reasons.

Finally, we earned another 2,500 points by declining housekeeping. We were only supposed to earn 1,000 points, but the hotel never awarded it. Emailing Hyatt didn’t help either until I earned Globalist status and got a concierge. I emailed her and voilà – 2,500 points appeared in my account rather than 1,000.

When calculating these values, it was interesting to see that four different loyalty schemes were represented. We have a healthy balance of points for all the main hotel chains as it helps ensure we can take advantage of award sweet spots like these, rather than earning and burning which could leave us with less flexibility.

4th/5th night free benefits in particular can be a great way to maximize point redemptions, although that’s not always an option (e.g. if you prefer several weekends away rather than one or two longer vacations each year).

Finally, remember that ‘Best Value’ can’t always be measured in terms of points and money. My favorite stay during 2018 wasn’t even a hotel – it was an off-grid cabin in Terlingua, Texas we booked through Airbnb.

There was no suite upgrade, no club lounge and no buffet breakfast (although the host did provide some of their chickens’ eggs). More importantly though, there was no light pollution as it was so close to both Big Bend National Park and Big Bend Ranch State Park. Both those parks are International Dark Sky Parks, so the night sky was something to behold and it was our first time seeing the Milky Way.

We paid $62 per night, paid for using discounted Airbnb gift cards (thanks Amazon/Amex!) and booked via Acorns to earn Found Money. Despite the stay not being free like the five hotels listed above, it provided innumerably more value, just in a non-monetary way. Being able to look up and see the Milky Way with the naked eye was simply magical.

What’s been your best value redemption, either in terms of cents per point or how it enriched your life? Let us know in the comments below.