Amazon is running a terrific deal that I imagine will sell out early this morning: get a Samsung Galaxy S9 unlocked and an Echo Show for 519.99. That’s a terrific deal as the phone alone regularly goes for more — and the new Echo Show has a regular price of $179.99. And it gets even better if you have the Amex 20% discount when paying with at least 1 Membership Rewards point as you can get it down to just $419.99 (plus tax). That’s pretty awesome if you’re looking to buy an S9 unsubsidized by a carrier (and a Samsung Galaxy S9 is of course great for Samsung Pay, which makes it particularly useful for those who can max out promotions on mobile payments this way).

One of the major draws behind a Samsung Galaxy S9 for rewards card enthusiasts is the fact that Samsung Pay is so widely accepted. In addition to using the NFC capability that Apple Pay and Google Pay use, it also has MST — a technology designed to “trick” the magnetic stripe reader at a credit card terminal into thinking that you’ve swiped a credit card. These makes it incredibly useful as you’re essentially able to use Samsung Pay almost anywhere with a credit card swipe reader. I’ve been using a Samsung Gear S3 smartwatch to get the same effect — though the phone has a couple of distinct advantages.

First, you can only link Chase Pay to Samsung Pay with the phone. While Chase Pay has very limited acceptance (and I’ve recently written about how challenging it can be to use), using it through Samsung Pay enables you to pay almost anywhere to take advantage of Chase Pay promos.

A second advantage of having Samsung Pay on a Samsung phone is access to certain promotions that only come up on the phone. Just last week, Samsung Pay offered 30% cash back at Best Buy and also 30% back on toys at Walmart. Both offers are incredible — but were only available on phones.

And of course being able to use Samsung Pay all the time means that you could earn 3x points almost everywhere on the US Bank Altitude Reserve. That’s worth 4.5% back when used towards travel.

Of course, this is still a lot of money for a phone — but if you’re the type to buy a flagship phone outside of a binding carrier agreement, this looks like a great deal. Whether you want the Echo or you sell it, you should come out nicely ahead if you’re able to stack these promos.

Note that the shipping date has been pushing out on this all morning. At the time of writing, it’s showing a ship date of December 11th — but that has been moving out day by day over the past couple of hours. I wouldn’t be surprised if this sells out soon. 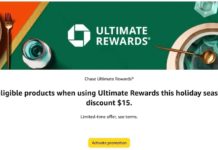 […] covered a number of Cyber Monday deals today, from a great deal on an S9 phone to Bose noise-canceling headphones and how you can save 65% on the room rate at some Wyndham condos […]

Should You Get a Samsung Phone to Earn Points? - Rapid Travel Chai

[…] Monday has various deals out there, see Frequent Miler and Dan’s […]

[…] Great deal: Samsung Galaxy S9 + Echo Show from $419.99 w/ Amex discount: This one probably hasn’t even gotten as much attention as it should. The Show is the 2nd gen. Should be able to sell that for at least $150 if all you want is the phone and stack a really nice deal outta this one. […]

And don’t forget Samsung pay rewards. I love my s8+. Combined with the Altitude reserve, it sets a minimum of 4.5% for everyday spend. Plus you can hotspot off Wifi, so one gogo pass can be used by the whole family. But the apple fanboys will continue to pay $1500 for a phone and continue to miss out on all these cool features so they can keep their bubbles blue.

The same price can also get you an Echo Spot and Echo 2nd-gen Speaker with the S9. I would go with this one as I’m not sure what I would use the Echo Show for? I wish S9 worked with Fi!

Are you sure it won’t work with Fi? I think you’d be limited to T-Mobile towers domestically, but otherwise I would have thought it worked with Fi…?

Well, that is true, but the perk of Fi is being able to switch between 3 carriers – if they still partner with US Cellular and Sprint? Plus when I tried Fi with just Tmo, sometimes I would not get incoming calls – maybe bc it’s not supported? Not sure, but it didn’t happen that often and it might be fixed by now. Of course with the G6 at $99, it’s hard to justify the S9 really – if I want Samsung Pay I would probably just buy a used Samsung. Still, this is a good deal for those eyeing the S9. My dream is Fi partnering with Apple and Samsung = heaven!

I’ve been looking at used Samsung phones (S6 and up) but you get some additional risk there with the potential of buying a stolen / blacklisted phone. A 3rd party seller at Walmart and Amazon had a refurbished S7 (T-Mobile locked) for $175 the other day and I almost pulled the trigger on it. I’m not buying today’s deal, but if you were to sell the Echo Show for $100 and look for some other stacking opportunities here, the overall deal could be pretty good for a brand new top-end device that won’t age out for a while. I hear you — it’s a steep price of admission. That Moto G6 for $99 is a hard bargain to beat. In my case, I want a Samsung phone with Samsung Pay that also gets band 71 on T-Mobile, so something like this appeals more to me — but that Moto G6 is a slamming deal for most people.

Good point with the reselling angle and band 71 point. How is the band 71 support on the Fi phones? I was curious which model would work best for local/international support with Fi and want to research it, but it sounds like you may already know! I am guessing Fi would work with any bands that are supported on Tmo/Sprint/USC. LTE bands are so complicated given limited device support, especially with older devices. Plus I think some countries like Japan are UMTS/LTE only and I know at least AT&T shut off 2G support already.