On October 8th, my wife and I were discussing options for Thanksgiving week travel.  She and my son would be free from work and school as of Monday afternoon before Thanksgiving.  Maybe we should visit our friend in Santiago?  I said that I would check award availability.

About a half hour later, my phone chirped.  Shawn had published a Quick Deal: “Wide Open AA Premium Cabin Award Availability to South America & Europe.”  Saver level first class award flights between the US and Santiago Chile were wide open for 62,500 AA miles each way.  I jumped online and booked our flights as two separate one-way awards for all three of us.  The first was Detroit to Santiago, via Dallas.  First class.  The second was Santiago to Dallas, first class.  Flights from Dallas to Detroit weren’t available.  For that final leg, I booked Delta economy awards as a backup, and setup an alert in Expert Flyer to let me know if/when saver awards opened up from Dallas to Detroit.  A day before our trip began, I received the alert email.  Thanks to my AA Executive Platinum status I was able to modify the return award to include the final leg, with no change fee.  And, thanks to my Delta Platinum status, I was able to cancel the Delta award without penalty.

4 hours in the Centurion Lounge

We flew to Dallas Monday afternoon and made our way from the C concourse to D, on foot rather than taking the Skylink train.  It was a pretty long walk, but we appreciated the opportunity to get some exercise before the long overnight flight.  We could have spent our time in the AA Admirals Club Lounge, but chose to go to the Amex Centurion Lounge instead.  Thanks to my Amex Platinum Business card, we were permitted in free of charge.  We enjoyed dinner and drinks, then my wife and I took advantage of the lounge’s free massages.

I didn’t take any photos of the lounge, so here’s a stock photo from their website instead: After leaving the lounge and boarding our flight, my son realized that he had left his iPhone lightning cable and wall adapter in the lounge.  It was too late to run back to get it so I searched online for a direct number for the lounge.  I was racing the clock because I knew that the flight crew would soon demand that phones be turned off or put into flight mode.  I failed to find a number to call and decided to reach out to Amex instead.  I tweeted @AskAmex and also emailed the Platinum Concierge (platinumrequests@concierge.americanexpress.com).  I asked them to let the Centurion Lounge people know that we would be back on Saturday to retrieve the charger.  It wouldn’t be a big deal to simply buy a new charger, but it would be nice to get it back.  The next day, @AskAmex unhelpfully replied “Pls call 972-973-4420 which is the lost and found in DFW. Hopefully, they have it for you.”  The Platinum Concierge was a bit more helpful: “I have reached out to the Centurion Lounge and they have let me know that they unfortunately have not located the IPhone charger as of it. They have let me know that if they do locate the charger that they will hold on to it for Saturday when you are back at the airport.”

The flight was comfortable and uneventful.  We passed up dinner service in order to get to sleep earlier.  Even though the flight boasts extremely old seats with cigarette lighter adapters for power, the seats were big and comfortable and reclined fully for sleep.  We asked to be woken for breakfast since we planned to go sightseeing immediately upon arrival.  For the record, my breakfast quiche was awful.

The following photo is from my trip to China, but it’s the same exact layout as the one we flew to Santiago: We had booked three nights at the Grand Hyatt Santiago.  Rooms were available for only 8,000 points per night.  That was so cheap that we actually booked two rooms and requested that they be next to each other.  When we arrived, I was disappointed to learn that our rooms were on the 3rd floor.  I had read that rooms on higher floors at Grand Hyatt had fantastic views of the Andes mountains.  For the first time ever, I pulled the “elite card”.  I pointed out that I have Diamond elite status and that I usually get an upgrade, at least to a higher floor.  Unfortunately, the hotel was fully booked and there were no other options for two rooms close to each other.  The desk manager, though, came up with a great solution.  There was a suite available on a high floor.  We traded in our two basic rooms for a single suite and a roll-away bed.  It wasn’t until we were finished checking in that the manager revealed the really great part: the suite was a Diplomatic Suite on the top floor.  Only their Presidential suite is bigger or better. 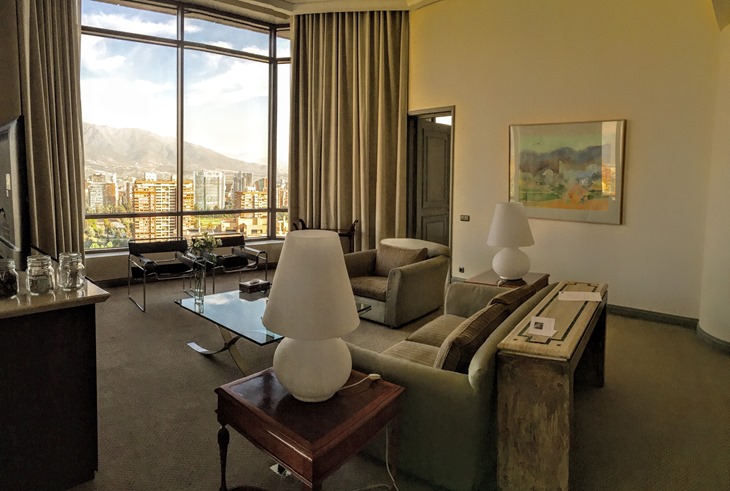 Pictures don’t do justice to how awesome this suite was.  Our jaws dropped as we entered through the suite’s double doors to find an enormous room with dramatically high ceilings and panoramic views of the Andes.  Our bedroom had a similar view and boasted an enormous jacuzzi tub.  We absolutely loved the suite and didn’t want to leave at the end of our trip! Evening view from the living room: In our four days in Santiago, we visited the coastal city Valparaiso; we explored a bit of downtown Santiago; we ate lots of great local foods; and we hiked the Andes.  I’ll write up details in a future post. Thanks to my Hyatt Diamond status, we secured a 4pm late checkout on Friday.  This gave us plenty of time to tour downtown Santiago and the Bellavista neighborhood before returning to the hotel to get our bags.  We Ubered to the airport and arrived too early.  We wanted to check bags, but the AA counter didn’t open until 6:20pm.  We waited at a café for an hour and nursed our drinks while consuming their free wi-fi.  Finally, after checking bags, we used the LATAM priority check-in area to clear security.  We breezed through passport control and the x-ray machines and found that the new LATAM lounge entrance was just past security.

In order to get into OneWorld lounges you need OneWorld Sapphire or Emerald status or a OneWorld business or first class ticket.  We were good on both fronts, so we were readily admitted.  The two story lounge is modern, bright, and stylish.  Thanks to having read this Points Summary review, we immediately headed upstairs where we found a nearly empty dining area with plenty of excellent food and beautiful views of the distant mountains (not nearly as beautiful as our Grand Hyatt 19th floor views, but still…).  Overall, we thought the lounge was terrific. Since the LATAM lounge wouldn’t announce AA flight boardings, we moved to the Admiral’s Club Lounge about half an hour before we expected to board.  There were snacks and sandwiches and drinks available, but we didn’t try any since we had our fill in the previous lounge.  Overall, I thought the lounge was desperately in need of a refresh.  It’s best feature was that it was located right next to our departure gate. This flight departed late due to a sick passenger.  Once we finally got rolling, I decided to try the evening dinner service and I was surprised that my chicken dish was very good.  My wife said that her shrimp dish was good too.  Morning coffee, on the other hand, was almost undrinkable.

The return to the Centurion Lounge and a weird interaction

When we landed in Dallas, we breezed past customs and immigration thanks to Global Entry.  As is usual with international arrivals, we had to pickup our checked bags and bring them to an area for transiting passengers to re-check them.  We then had two hours available before our next flight, so we returned to the Centurion Lounge to get drinkable coffee and to hopefully find our son’s phone charger.

After checking in at the Centurion Lounge, I asked the desk agent if a phone charger had been found.  She said no.  Another agent, though, asked for details about it.  My son described it as a black iPhone charging cable with a white cube shaped wall adapter.  The first agent then asked if it had any special markings on it to prove it was ours.  Um… no.  The second agent disappeared into a back closet and reappeared with my son’s stuff.  Yay!  Before handing it over, though, the first agent gave him a short lecture about making sure that his stuff has unique markings on it because, “as a policy,” they don’t return found items unless they can be proven to be yours.

We were happy to have the charger back, but we found the desk interaction to be weird and not at all customer friendly.  If a guest is missing a charger and one had been found, why not just give it to them regardless of whether its really theirs?  Do they really think that thieves are going to frequent the Centurion Lounge to steal from their lost and found?  And why did they pretend at first that no chargers had been found at all?  I don’t get it.

We arrived in Detroit without incident and one of our two checked bags did too.  The other bag decided for some reason to wait until a later flight from Dallas.  I left my phone number and address with the AA baggage office, and the bag was delivered to our house by around 11pm that night.

Overall, our trip spanned five nights (two in the air), and four days in and around Santiago.  To many, that will sound like too short of a time to be “worth” traveling so far.  Sure, we would have liked to have stayed longer, but we had limited time available and we had a great trip.  And, as I’ve proven before, you do not need as much time as you may think to enjoy long distance travel (see: One day in Beijing. Fewer words, more photos).  I’ll go into detail about our time in and around Santiago in a future post.

By Deal or Destination? How do you travel?

[…] For details, see: To and from Santiago Chile, my favorite Diamond upgrade ever, and a weird Centurion Lounge lost and …. […]