StayCay to Far Away is now 75% finished, with all four Week 3 entries posted to YouTube for your edu-joyment. If you missed any this week, now is your chance to see the videos below and click the titles to go through to Youtube and give a thumbs up to those efforts worthy of your praise. This week, we’ll publish a separate “results” post on Saturday at noon Eastern rather than folding it into Week in Review — so there is still time for you to watch and give us your thumbs. Keep in mind that in addition to counting toward the weekly winner, those thumbs up count toward eventual category winners as well, so each of us are eager for the shot to earn your seal of approval. Enjoy! 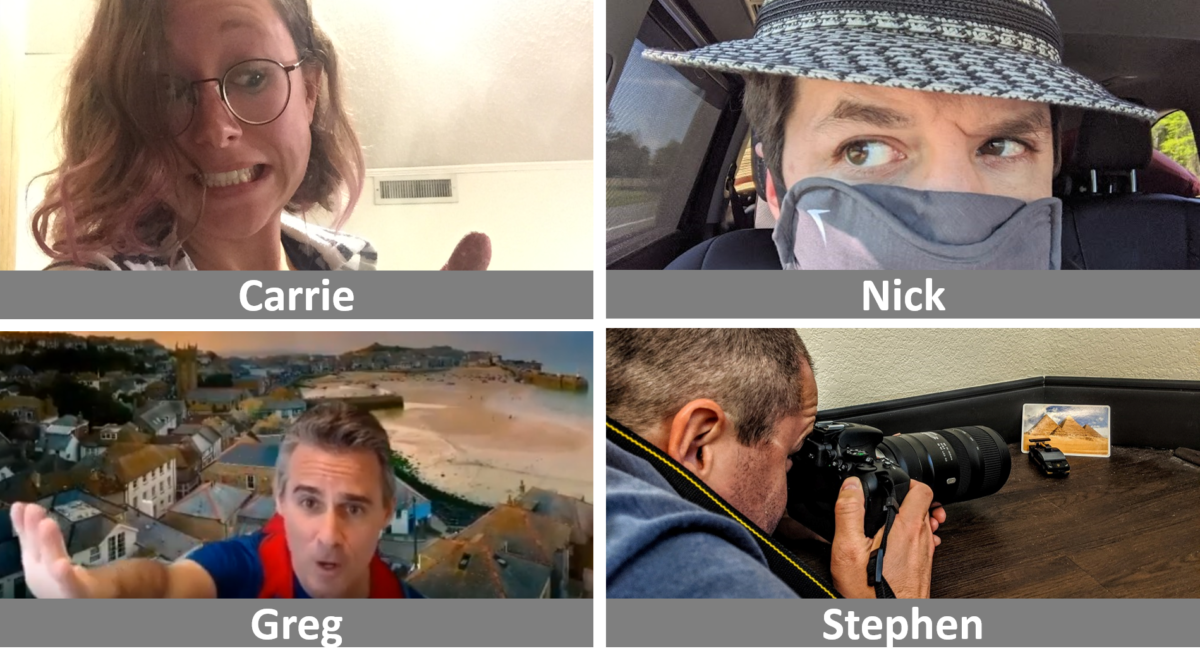 That’s it.  The title says it all.  We’re going to count up each video’s “likes” (thumbs ups).

When you’re viewing a video embedded in a blog post, it’s a little tricky to give it a thumbs up.  Here’s how: Hover your mouse over the video (or click the video if viewing on your phone) and then click the video title to go to YouTube.  Once there, click the thumbs up icon to “like” the video. The weekly winner will be announced on Saturday at noon Eastern time, so “like” these videos today and keep an eye out for the announcement on Saturday.

Mochi…Nailed It! Carrie (and her twin sister) tackle the Destination Cooking Challenge for #StayCaytoFarAway

When I read to my wife the title of Carrie’s post/video, her first reaction was, “Mochi…..that’s ambitious!”. Immediately after watching it, she said, “This makes me want to do a Zoom cooking party with Carrie!” I’m not sure whether that was because it looked like so much fun or to help Carrie, em, further develop her inner chef, but I’m pretty sure it was the former. Whether you’ve ever wondered how Mochi is made or you’ve ever just wanted a good belly laugh or two, check out the video and it surely will not disappoint.

Greg gets down and dirty with his collection of hotel hacks this week. His brilliance comes in streaks, but you nonetheless are guaranteed to get strung along all the way to the end. Greg has had some good runs these past few weeks, but this video left me asking myself, “Why didn’t he call the front desk and ask for some silverware?”, but by that point the damage had been done and I couldn’t unsee what had been seen. Neither can his hotel housekeeper.

Artistic rendering isn’t my forté — there is a reason I’m a writer and not a sculptor or painter. But I still managed to get a photo of lava flowing into the ocean and steaming in my own backyard (which wasn’t as easy as it looks — I tried once the fire got to 500°, but it didn’t get me much other than hot steam and embers bouncing back in my wife’s face…which helped us adjust for the second round). Take #2 was over 700° and that did the trick. See how I also re-created a luau and night volcanic crater scene in the video above!

Getting Off My Soapbox (Derby) – Improv Travel With Stephen #StayCayToFarAway

Seeing Stephen’s reaction and great effort to narrate pictures from my trip to Ecuador was fun for me and surely a challenge for him. I didn’t want to pick a trip he may have seen many pics from on the blog or Facebook, so this trip was more than 10 years ago; I had to dig out an old external hard drive and hope it still worked (which is what led to my purchase of a new hard drive from Dell the other day). He even saw more than I did — I had totally missed the elephant in the background of that one shot. For those who end up curious, the initial beach was Los Frailes and the sunset was Canoa, the Soapbox Derby was in Baños, the zip lining was in Mindo, the hiking with the sheep and what Stephen thought was a beach was the crater of Quilotoa, and the monkeys were wild ones we encountered after rafting the Misahualli River near Tena. Amazing how much you can do in such a small country — and it was fun for me watching Stephen’s reactions to it.

We have had a ton of fun with StayCay to Far Away and I think it shows once again in this week’s videos. I love that Carrie included her twin sister this week and that Truffles made another cameo. As someone who spends most of my time thinking about topics that don’t really interest my immediate family much, it’s fun getting everyone else involved in Frequent Miler for a few minutes — and it’s been a lot of fun taking a few minutes to look at the lighter side of this miles and points game. I hope you’ve enjoyed it as much as we have. Now on to the home stretch — the gloves are coming off and everyone gets one more shot at glory in our final week next week, followed by your chance to vote on the champ. Stay tuned.