Over the weekend, Ian Snyder at Miles to Memories posted some great news about Turkish Airlines Miles & Smiles: some domestic United Airlines flights can be booked online for just 7,500 miles each way (including to places like Hawaii and Alaska). While we broke the story on that sweet spot last month, we initially thought that booking had to be done via email. We later posted that bookings could be made via phone, which has been true for many (but not all) readers. The expansion to being able to book online is an amazing development, but it’s a mixed bag. I had a number of theories about what could and couldn’t be booked with Turkish Miles & Smiles, and the online tool only amplified my confusion. Here are my bumbling experiments thus far.

For those who want to jump straight into searching the online tool, I’ll save you twenty minutes of frustration if you missed Ian’s post: First, log into your account. Then, click the drop-down menu to the right of your name (in the top right corner). Choose “Miles Transactions” and then look for the “Star Alliance Award Ticket” area and click “Book Now”. 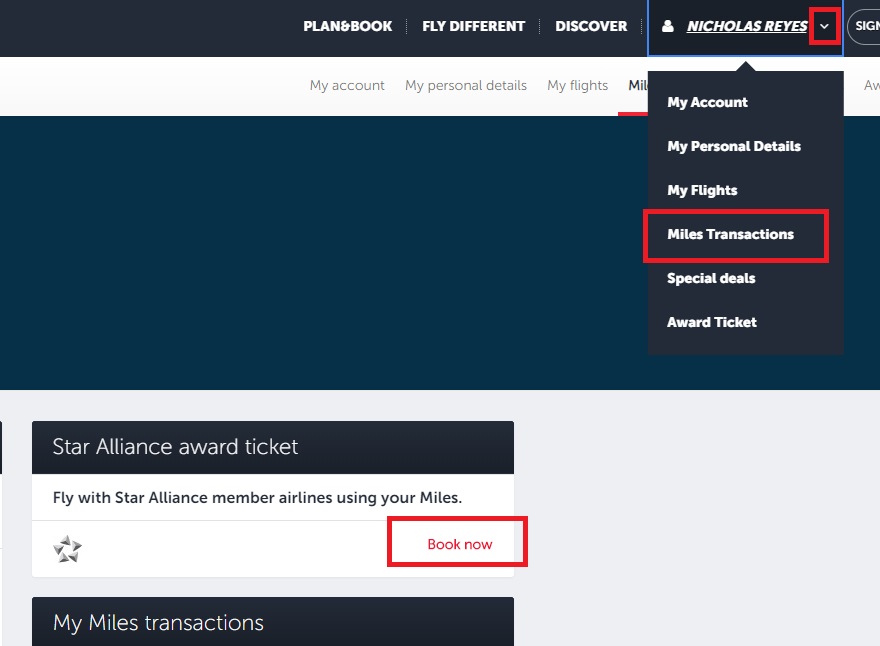 To give some framework for my bumbling experiments below, I first have to outline the assumptions upon which I’d been working and the findings that Ian reported over the weekend.

When we first reported the ability to book domestic United one-way awards for 7,500 miles each way in economy class or 12,500 miles each way in business class, some readers reported being quoted double those numbers of miles on their itineraries. As soon as we dug into the details, it became apparent that Turkish must enforce a maximum connection time of 4 hours on a domestic ticket. I based that assumption on two things: first, a reader reported being quoted double the miles (15K one-way) for an itinerary with a connection of just over 4 hours while another reader with a connection of about 3.5hrs reported being quoted a price of 7,500 miles. Second, Singapore Airlines imposes this same restriction on domestic economy class awards. The dots seemed to connect quickly on this, so we let people know that the max connection time is 4 hours and that seemed to hold up based on reader comments / non-comments.

Separately, we’ve received a handful of reports from readers who say that phone agents haven’t been able to find availability on routes that otherwise appear available via United.com. I’ve personally traded emails with a couple of readers in this situation and checked their itineraries and have been perplexed as to why Turkish can’t see the available award space. It’s not the number of connections: I had no trouble booking itineraries with 1 or 2 stops, which matches the numbers of stops on failed itineraries submitted by those couple of readers. It’s not booking from a small airport as I had no trouble booking from Albany, NY (which also eliminates the theory that Turkish is unable to ticket small regional flights). It’s not married segment logic as the segments in question are available individually and together at United.com. The only common thread I saw was that in several instances of itineraries that Turkish said were unavailable, the first connection was less than one hour. Could Turkish have a minimum connection time of an hour? That didn’t really make sense as I think (in at least some cases) the Turkish agents were reporting the first flight unavailable before even getting the details of the second flight. But hold on to this (weak) theory about minimum connection time for a moment.

Those assumptions / questions were mine before reading Ian’s piece. If you haven’t yet read his post on booking online, you should. However, I’ll summarize some of Ian’s key findings for quick reference:

Now let’s get to work on the experiments.

My theory about a max connect time of 4 hours has seemed to have held up for phone bookings (we’ve received no contrary reports). This assumption felt like the most solid of any we had.

That is, it did until I got to playing with the online tool. As you can see, this itinerary (which is available for 7,500 miles each way) has an overnight layover of more than eleven hours. There goes my max connect theory. And no, this wasn’t the only one I found with a long connection. To be clear, I don’t think you can book that over the phone. But you can online.

I admitted that the minimum connection time theory was weak. However, I was grasping for straws. Turns out whomever flies HNL-LAX-DEN gets the short straw — or the short layover, anyway.

At just 39 minutes, that shot my minimum connection time down. Ian also shot this down, showing an itinerary with a 28 minute connection.

First up, I think he’s right that you can’t book one-way United awards online. Back before I initially wrote about this sweet spot, I tried searching online. Based on some information at Flyertalk, I thought that it was somehow possible but that maybe it required some knowledge of coding. Silly me: I had only searched one-way and had failed to find the Star Alliance booking tool. As Ian notes, you must book round trip if you book online – there’s simply no option to choose a one-way search.

Eastern US to Hawaii for 7500 each way

However, Ian also noted at at some point between Central and Eastern time, flights began pricing at 11,250 miles each way for some inexplicable reason. Fortunately, I didn’t find that to be geographical, nor did I find 7500-mile flights to be limited to the nine cities listed. Here’s Boston to Honolulu for 7,500 miles each way: 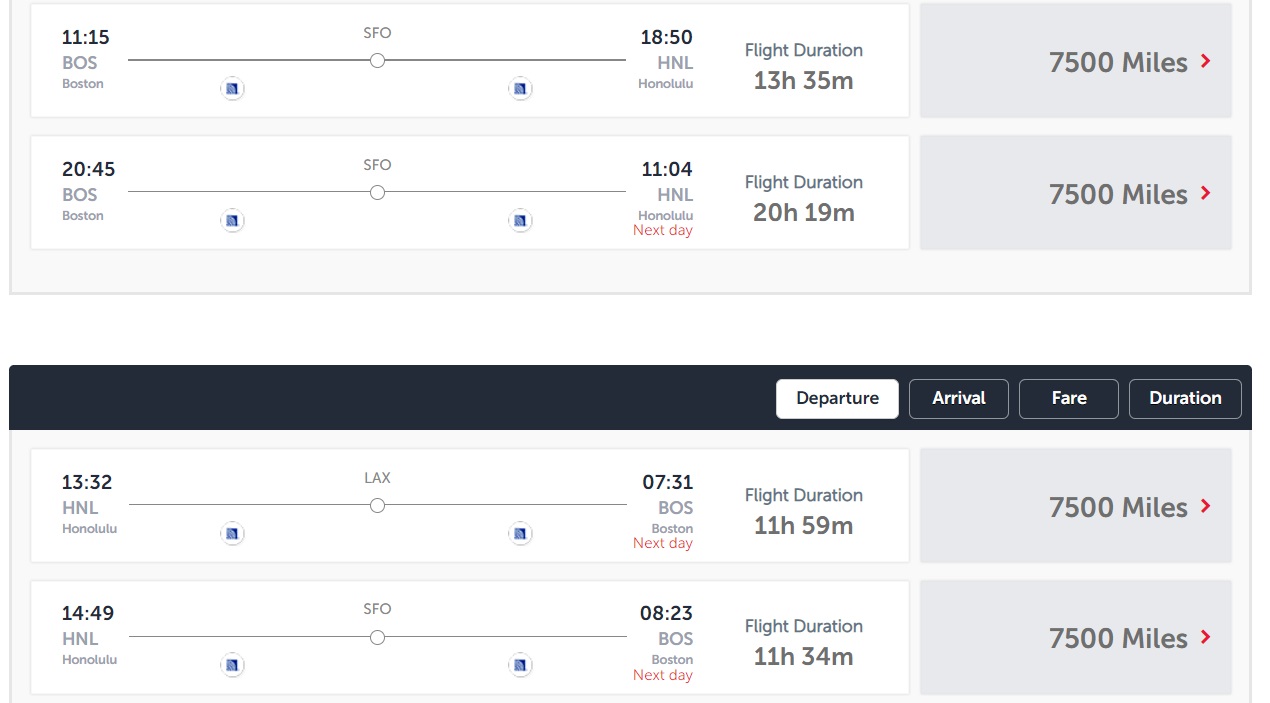 And Washington, DC to Honolulu for 7500 each way: As Ian notes, even though Turkish doesn’t include EWR in the airports for the search tool, you can connect through it. For example, here’s Detroit to Honolulu for 7500 miles each way. Some flights do price higher, but why?

I did find that flights between Denver and Honolulu price at 11,250 miles each way just as he said — and I can’t figure out why. At first, I thought hat perhaps it was some sort of mixed-cabin pricing like Avianca LifeMiles? I wondered whether maybe one short leg on just one of the available itineraries might be in business class and therefore driving up the price. Alas, I checked each leg and each was available in economy class. Interestingly, you can see above that in addition to options that connect in San Francisco or Los Angeles, the direct flight from Denver is available. It was available in both directions on the dates I checked. That defies the notion that one must have connections in order for the itinerary to price online….though at 50% more expensive than it should be, I probably wouldn’t book that online. I’d call.

But direct flights aren’t consistently available from other gateways — even when they should be. For example, I found a set of dates where flights from Seattle to San Francisco to Honolulu were available for 7500 miles each way. Yet, despite connecting through San Francisco each way on that Seattle itinerary, a search originating in San Francisco came up empty. I similarly couldn’t get the tool to price any dates directly from Houston even when there was saver space on the nonstop available to both LifeMiles and Aeroplan.

And the increased 11,250-mile pricing wasn’t limited to Denver or Hawaii. Here’s Chicago to Anchorage for 11,250 miles each way. Though it’s at least kind of interesting to me that the above connects in Denver. Perhaps Denver is the problem for some reason? It’s inconclusive.

Some airports don’t show up in the tool….or do they?

Ian notes that some airports, like Newark (EWR), are seemingly not loaded into the online tool for searching (even though airports like EWR do show as available connecting points). He’s sorta right about that — if you try to type Newark or EWR into the search box, the online tool won’t find the airport.

However, if you empty the airport cell out, you’ll get a link that says “see all destinations”.

Those familiar with booking Virgin Atlantic awards online will see where I’m going with this. When you scroll the airports in the United States, guess what shows up? Ready for the fun part? You can’t click on it. Believe me, I tried. I tried clicking it over and over. I wanted that to work. It didn’t.

But, it gives me hope that one of Ian’s final conclusions (not listed above) is true. He proposes the following:

It’s possible this Star Alliance booking functionality is in beta and Turkish didn’t mean to release it. It sure feels like it.

Now that’s a sentence with which I can optimistically concur.

The ability to book at least some Turkish Miles & Smiles awards online is huge for those who don’t want to spend the time on the phone feeding segments to an agent. I still can’t believe that it’s possible to fly to Hawaii for just 15,000 miles round trip and it’s now even easier for folks in some cities to book those flights online.

Unfortunately, the online tool definitely doesn’t show everything that is bookable via the phone. For example, I couldn’t get any itineraries to price from my home airport despite having booked over the phone already.

One other potential hang-up here could be in booking tickets for other people. Ian notes that he wasn’t totally sure that it could be done. See his post for more detail, but I’m similarly unsure whether or not you’ll be able to book a ticket for someone else online.

Fortunately, phone bookings via the Turkish call center do work in most cases — so you should be able to call and book over the phone if you can’t book with your companion online. Assuming Turkish sees the availability, that process should be pretty easy. If only we could figure out a pattern as to what availability Turkish can see, that process would get easier yet. The online booking tool hasn’t made that pattern easier for me to find, but I sure haven’t given up yet. 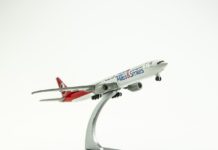 (EXPIRED) United business class to Tel Aviv: Up to 6 seats some days (47K one way with Turkish) A trip down the Turkish Miles & Smiles rabbit hole