My wife, son, and I recently returned from a four night stay at the Andaz Amsterdam Prinsengracht hotel.  It was great.  It’s a great hotel in a fantastic location.  We had to book two rooms for our stay.  Regular rooms only accommodate two people and there were no regular suites available that could be booked with points or with upgrade instruments.  And the suites that were available were far more expensive than two regular rooms.  This may be the only area in which I wish Hyatt would follow Marriott’s lead and allow booking rooms with points plus a cash copay to cover room upgrades (see:Hotel award booking for 3 in London. Marriott to the rescue.) The room rate at the time I booked was $341 per night all-in (e.g. after taxes).  That meant that a points-stay would get only 1.36 cents per point value.  With Hyatt points I can usually do much better.  Plus, I was able to book a room through the Citi Prestige Concierge in order to get the fourth night free.  That brought my per-night average down to only $256.  Unfortunately, my wife doesn’t currently have a Prestige card and they only allow one room to be booked with this benefit per stay.

I tried a number of hotel discount sites and other tricks to lower the second room’s price, but with no success.  In the end I decided to book the second room with points.  I didn’t get great value that way, but I did get to do an experiment that might help readers…

Hyatt gives their top tier elites full free breakfast every day of their stay for up to two people per room.  In order to secure free breakfast for all of us, I needed to book both rooms as a top-tier Hyatt Globalist, but I’m merely a Hyatt Explorist.  In a hotel with a lounge, Explorist status isn’t bad.  Explorists do get 4 lounge upgrade certificates each year.  But this hotel has no lounge.  So, I needed another option.

Hyatt offers a unique benefit to their top tier Globalists.  Globalists can book award stays for their friends under the Hyatt Guest of Honor program.  When an award stay is booked this way, the friend (me, in this case) is supposed to get all of the same benefits that a Globalist would get during their stay.  Plus, Hyatt allows free point transfers to friends once per month.  So, the trick is to transfer points to a Globalist friend and have them book your stay under the Guest of Honor program.

I’ve written about this benefit before: How to get Hyatt Diamond benefits without status.  When I had top tier status, I even booked a few awards for friends using this benefit.  But I never experienced the benefit from the other side.  Would I really be treated like a top tier guest?  While it worked out well for my friends, I’ve read complaints from people who did not get the benefits they expected.  I wanted to experience this myself.

Keep in mind that this approach only works for award stays.  I checked that awards were available and then asked a Globalist friend to book it for me.  He had enough points in his account to float the award for me so that I could pay him back later.

Another option for borrowing elite status is to have an elite friend book a stay (paid or award, it doesn’t matter) and explicitly add you as a second person to the room.  It’s a good idea for the elite friend to have the hotel add a note to the reservation stating that you will be arriving first and have permission to check in.  When you check in, you then use your own credit card to pay for the stay.  If all goes well you will enjoy elite benefits during the stay and you’ll earn credit card points.  And your elite friend will earn hotel points for your stay plus elite nights to help them re-qualify for next year’s status.  When it works, it’s a win-win.  I have heard some tales of this sort of thing going wrong, but I believe that it usually works fine.

In my case, in order to get the 4th night free, I had to book the stay myself through Citi under my own name and Hyatt account.  I emailed Citi Concierge (instructions here) to book the stay.  Within hours they replied with confirmed booking details.

Next, I changed the primary guest on the reservation to my Globalist friend.  This was super easy.  I needed my confirmation number and my friend’s full name, address, and Hyatt number.  I sent Hyatt Concierge a direct message on Twitter to request the change.  It was done within a few minutes: Now I had a great little experiment.  At a single hotel I would check into two rooms and both should get Globalist benefits.  In one room we would use the Guest of Honor approach and in the second we would use the Second Guest approach (for lack of a better name).  Plus, I would get the 4th night free for the second room.

When we checked into the hotel at the beginning of our stay, Henry (I don’t remember his actual name — it might have been Henry) had no trouble finding both reservations.  He mentioned that one room was booked as a Guest of Honor.  For the second room he looked up my status and said that he saw that I was an Explorist.  He then apologized sincerely for not upgrading our rooms.  He said that they always upgrade rooms (presumably for mid to top tier elites), but that every single room in the hotel was booked solid. I offered to trade in both rooms for a single suite, but he declared that every single suite was booked too.  This was true.  I had checked earlier that day.

Interestingly, even though one of the rooms was booked under my friend’s name as the primary guest, Henry never asked about him.  He checked us into both rooms with the assumption that there would be just the three of us.

Henry then led us to our rooms on the third floor.  The room booked with points was an interior room with a pretty darn cool atrium view, and the other had a view of their garden.  We put our son in the interior room.  On the way to the rooms Henry said that our son’s room comes with free breakfast since it was booked under the Guest of Honor program.  Confusingly he then said that since there was only one guest in the room we were only supposed to get one free breakfast, but he had set it up to allow for two.  That way, he said, we can get 2 of our 3 breakfasts for free.

Wait… what?  I told Henry that the other room was booked under my friend’s name and that since he was a Globalist we should get free breakfast with both rooms.  Henry nodded and said “I changed that room to be under your name so that you would earn the points… I’ll put it back.” 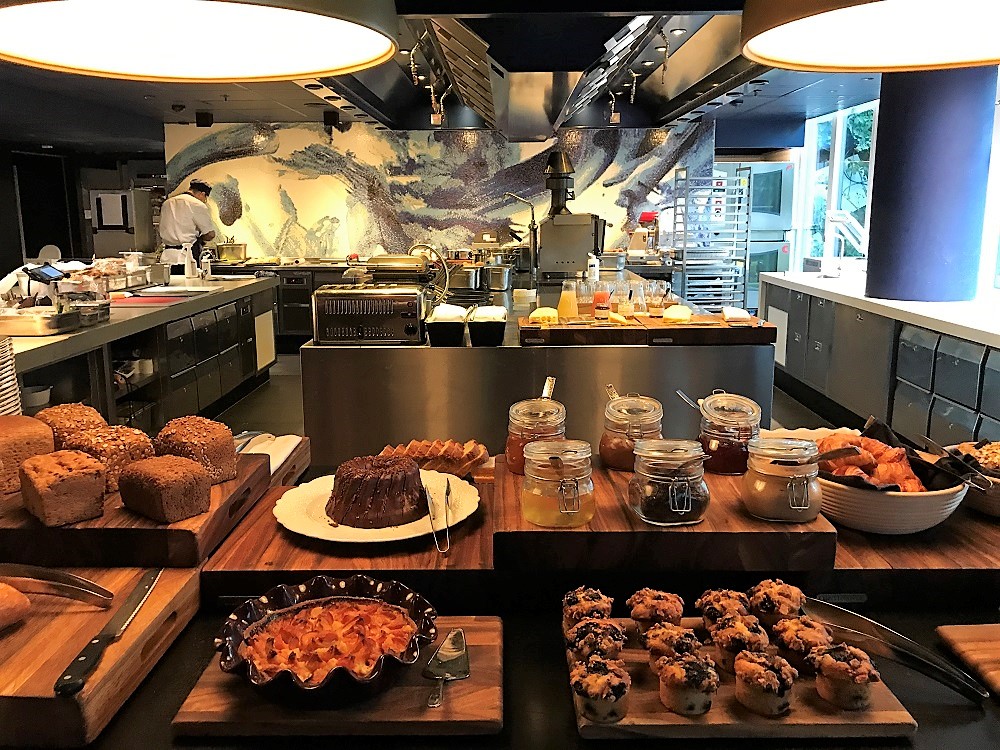 While this isn’t a review (I’ll get to that in a future post), I’ll mention that service during our first breakfast could best be described as complete chaos.  We found out later that a woman who works at the restaurant is absolutely awesome and seems to be the key to keep everything running smoothly.  She wasn’t there that first morning.

The Andaz charges a whopping 35 Euro for their full breakfast, which includes a buffet plus a hot item from the menu.  When different servers asked for our room number (this was part of the chaos), I was careful to say that my wife and I were in room 319 and my son was in room 310. Since we were only allowed two free breakfasts per room it was important to clarify this.

Eventually, the bill was brought to our table: 35 Euro for our son’s breakfast.  I didn’t think this was strange.  Some hotels charge for breakfast and then later remove the charge for their top tier elites.  But then I asked about the bill for our room and was told that our breakfast was free so we wouldn’t get a bill.  Uh oh.  I decided to deal with that issue later.  I knew from experience that upon check-out it is usually easy to get these issues resolved.

On all future breakfasts, the system worked perfectly.  We gave both room numbers and were able to walk out at the end of the meal without receiving a bill.

Upon check-out, the agent quickly removed the one breakfast charge when I pointed out.  I asked why it was there and she said that it was because only one person was in that room and we had charged two breakfasts to it.  I think that the guy who keyed in our breakfast details that first day had messed up.  No big deal.

While we encountered very minor hiccups in the process, both approaches worked well.  I believe that both rooms would have been upgraded if any upgrades were available, but I can’t prove that.  If just one upgrade was available, I got the sense that it would have gone to the paid stay rather than the points stay, but that’s just conjecture.  The one guaranteed benefit for our stay, free breakfast, was delivered as expected.