It’s time to check in again with our informed newbie Ben. Previously, we helped him form a credit card plan.  Next, he successfully signed up for three cards at once.  Intentionally, all three were business cards that do not report to personal credit bureaus.  This way, Ben can sign up for many more cards without exceeding Chase’s 5/24 limits.  And our next update about Ben was in July when we reported his progress and his 3X surprise.  Finally, in the post “Newbie’s Second Dance,” we reported his second round of applications.  He successfully signed up for a second Ink Business Preferred card (80K offer), an Amex SPG Business card (35K offer), and the Amex Delta Platinum Business card (70K offer).  Coincidentally (for those interested), the SPG and Delta offers are now available again.

Recently Ben signed up for a few new cards.  In January he applied through an targeted email offer for the Chase Sapphire Preferred for 60,000 points after $4K spend and an additional 5,000 points for adding an authorized user.  Unlike the current public 65K offer, Ben’s first year fee was waived.

Then, after meeting the spend on his Sapphire Preferred card, he decided that it was time to pickup the SPG personal card and the Marriott Business card.  Neither card is likely to be available for new signups after this year (see: Marriott announces new credit card lineup) so Ben wanted to get in on them while he still can.

The current public offer for the SPG personal card is 25K points after $3K spend.  Ben reports, though, that he was able to find a 30K offer by doing the following:

Ben was instantly approved when he signed up.

The current public offer for the Chase Marriott Rewards Premier Business card is for 75K points after $3K spend in 3 months.  Ben couldn’t find a better offer than that (neither can I, FYI), so he applied for that offer.  Ben’s application went pending.  He reports that he called Chase’s reconsideration line (found here) and spoke to an analyst to try to get an instant decision.  The analyst asked a few questions and then said that he pushed the application forward to a senior analyst.  He was told that he should get a decision in 5 to 7 business days.  Ben is still waiting for news on this one.  If he is denied, he’ll call reconsideration again.  It’s possible / likely that they’ll approve him if he moves credit from another Chase business card.

Update March 11 2018: Ben reports that his application was approved! 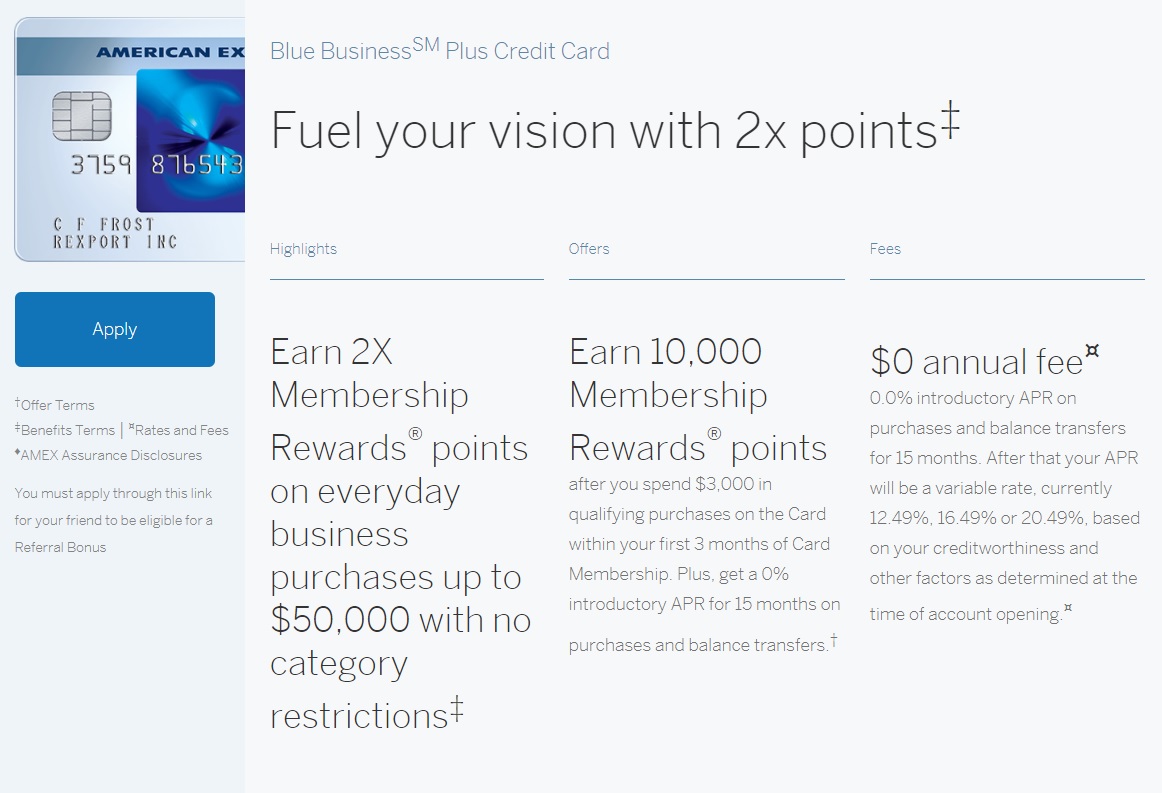 Ben decided to throw one more application into the mix: the Amex Blue Business Plus Card.  Thanks to its 2X everywhere Membership Rewards earnings on up to $50K spend annually, I’ve previously described this card as the “new king of everyday spend.”  Ben reports that he has wanted to get this card but was waiting for a signup bonus (there hasn’t been a public signup bonus for this card since early on).  Fortunately for Ben, Amex recently started offering 10K points after $3K spend when signing up through a referral link (found here).

Ben first tried his Chrome incognito trick (as described above in the SPG 30K section), but didn’t land a better offer, so he went with the 10K referral offer.

In the past 9 months, Ben has signed up for 10 new credit cards.  Given that, you’d think he was now way over 5/24, but he’s not.  Most of the cards Ben applied for were business cards from Chase and Amex.  And those business cards do not count towards 5/24 (see this post for details).  Out of those 10 cards, only his Sapphire Preferred card and his SPG personal card add to his 5/24 total.  As a result, Ben can continue to sign up for Chase cards for a while without worrying about 5/24.  As long as he sticks primarily with business cards (except from Capital One which reports business cards to the credit bureaus), he can continue to collect new card bonuses without adding to his 5/24 count.

Adding up the points

Here’s a full tally of Ben’s point earnings so far.  In most cases I assume that Ben spent (or will spend) exactly the amount needed to meet minimum spend requirements, and that this spend earns just 1 point per dollar (except where noted with an asterisk).

Earning over 600,000 points in a short period of time is impressive, but it’s worth considering how much it cost Ben to accomplish this.  In order to estimate his expenses, we’ll include the cost of meeting minimum spend and any first year annual fees.

$1,335 sounds like a huge amount of spend, but it’s arguably a very small price to pay for 600,000 points.  Also keep in mind that Ben probably had some Fee Free Dollars with Plastiq, and probably met some of the minimum spend requirements with natural credit card spend (no fee) rather than with Plastiq at 2.5%.

If Ben wanted to, he could redeem Ultimate Rewards points for cash at a penny per point.  So, he could actually offset all of his fees as follows:

If Ben did this, he would still have the following points available:

In other words, Ben arguably earned over 400,000 points for free.

Here were his comparable scores in July:

And Ben’s Experian score is still Very Good (but it has dropped 22 points since we looked at it in July):

This is a 22 point drop from July:

Inquiries become less important to your credit score after about 90 days and drop off your report completely after two years.  So Ben’s Experian score should recover nicely if he waits a while before applying for more cards, or applies for cards from banks that don’t use Experian for their hard credit pulls.  Note that which credit bureaus the banks pull from varies by the applicant’s location.  You can get a fair idea of which credit bureau may be pulled by checking the Credit Pull Database.

In the 9 months since Ben started signing up for credit cards, he has earned (or will soon earn) over 600,000 points.  That’s awesome.  And these are not cheap easy to get points like Hilton or Club Carlson points.  Most points earned (or soon to be earned) are transferable points (Ultimate Rewards, SPG, and Membership Rewards) which I consider to be the most valuable points around.

Using my Reasonable Redemption Values (RRVs) for points & miles, we can estimate how much travel Ben can reasonably expect to get from the points he has collected so far: $9,784!  And if he cherry-picks the best value rewards he can get much more.