In planning my trip for our 3 Cards, 3 Continents challenge, I’ve been leaving no stone unturned when it comes to finding ways to use points or get discounts on each of the essential travel portions of my trip. One thing that came as quite a surprise is the fact that it is possible to get $0.01 per point in value (or as much as 1.17c per mile — maybe even more) when using American Airlines miles to book hotels. While that does not represent particularly good value for American Airlines miles, it is a much better deal than one would normally expect when using airline miles for a hotel booking. 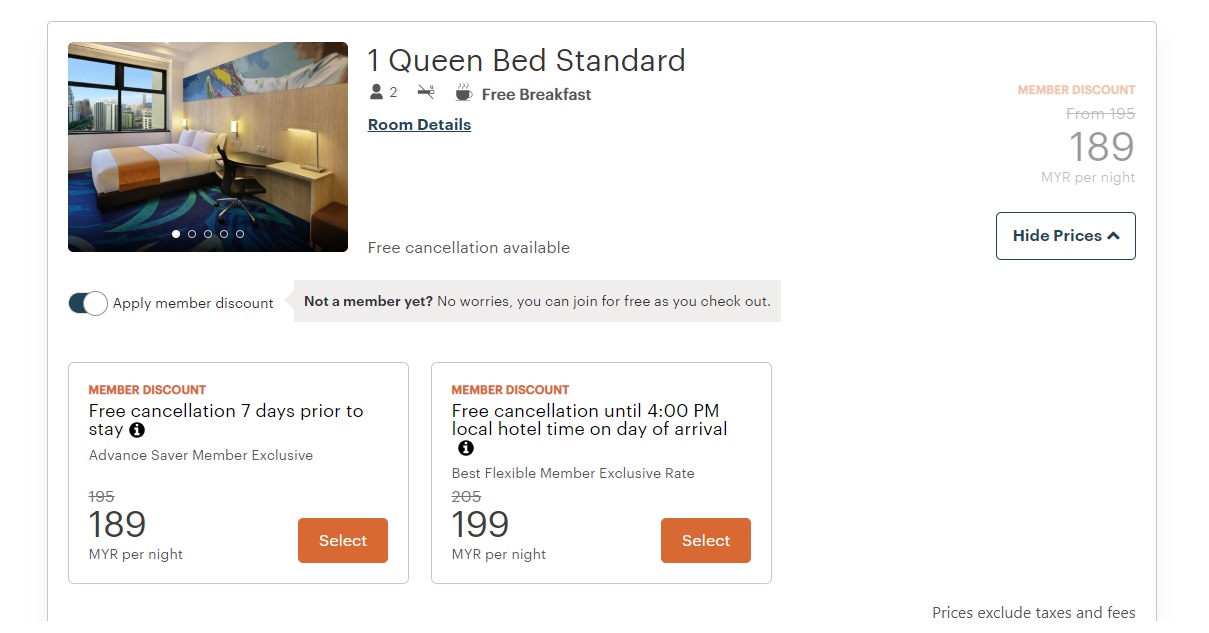 For the purposes of comparing gala apples to honey crisp apples (which is to say kind of apples-to-apples but just a little bit different still), let’s take the 199 MYR rate that is cancelable until 4pm on the day of arrival. With tax, that comes to 230.67 MYR.

American Airlines allows cardholders to use miles for hotel bookings through its partnership with Rocketmiles. You can book hotels using your American Airlines AAdvantage miles at hotels.useaamiles.com.

Searching for the same hotel and date at hotels.useaamiles.com, you’ll find the same property available for 6,800 miles (or you can choose to use fewer miles and a cash copay). I should note that my quip about gala apples and honey crisp apples is because the cancellation deadline was very slightly different — about 1am on the day of arrival via American Airlines or 4pm on the day of arrival via IHG.

At first glance, using AA miles to book a hotel yields a predictably poor value. Using 6,800 miles on a hotel that would have otherwise cost you $51.81 yields a value of just 0.76c per mile. It doesn’t get better with any of the other cash copay options (actually, it does get about one thousandth of a cent better at the 3,400 mile redemption, but that’s not going to make a difference in the bottom line assessment of “poor value”). Of course, it’s still a heck of a lot better than what Aeroplan considers a “great deal” — they’ll charge you 9,000 Aeroplan miles for the same hotel booking.

However, while exploring hotels.useaamiles.com, I noticed that it mentions discounts for AAdvantage cardholders and elite members. I currently have AAdvantage Gold status (waiting on my flight from last month to credit so I’ll hit Platinum!), and my wife is an AAdvantage cobranded cardholder, so I logged in to each of our accounts and I was surprised that elite status or cardholder status made a pretty significant difference (we both saw the same pricing shown below).

That’s obviously not a great redemption. Our Reasonable Redemption Value for American Airlines miles is 1.3c and you can get far better return if you value premium cabin international travel. However, if you are just looking to reduce the cash cost of your trip as much as possible and you have AA miles to spare, this isn’t a horrible redemption.

I know that some readers are particularly flush in AA miles thanks to last year’s SimplyMiles deal that awarded 240 miles per dollar donated to Conservation International (long over). Some donated enough to earn many millions of American Airlines miles. If you looked at that deal as simply buying miles for the cost of the donation, your cost of purchasing miles was around 0.41c per mile. If you bought millions of miles at that rate, you might not be terribly disappointed to get 1c per mile or better for hotel bookings. And for those who really pushed the pedal to the metal on that deal, hotel booking might get even better.

That’s because there are better discounts for top-tier elite members. The discounted elite member rates above came from my Gold status. My wife, who is an AAdvantage cobranded cardholder (but has no elite status) saw the same mileage redemption rates. Tim has Platinum status with American Airlines and he also saw the same 5,100 mile headline redemption rate.

However, Stephen Pepper has top-tier Executive Platinum status with American Airlines. His rates were better than ours!

As you can see, his redemption rates were an even better deal! At 4,600 miles to get this $51.81 stay for free, that’s about 1.13c per mile. At the middle redemption level, he could redeem 2,300 miles and pay $25 — meaning that he erases $26.81 in hotel charges for 2,300 miles, a value of ~1.17c per mile. That is certainly approaching a more reasonable value proposition. I wonder whether ConciergeKey members (even those whose status came primarily from the SimplyMiles deal) get even better redemption rates?

Of course, the example here ignores the fact that bookings made through Rocketmiles (at hotels.useaamiles.com) will not earn hotel points or elite credit or qualify for elite benefits, whereas booking direct will yield those things. Therefore, the “true” net cost of the hotel after accounting for the value received in the form of hotel points and elite credit (and any promotions you may be able to trigger) could be less than the $51.81 sticker price (and therefore the mileage redemption not so strong).

However, if you were booking a hotel without a loyalty program, that difference could quickly be eliminated.

For example, Greg and I stayed at the Four Seasons Abu Dhabi during our Passing the GUC trip (we each booked our rooms via Amex Fine Hotels & Resorts) and we both thought it was very nice.

That same hotel and same room type booked through hotels.useaamiles.com comes out to 35,100 miles for me as a Gold member. That maintains a value of just over 1c per point. 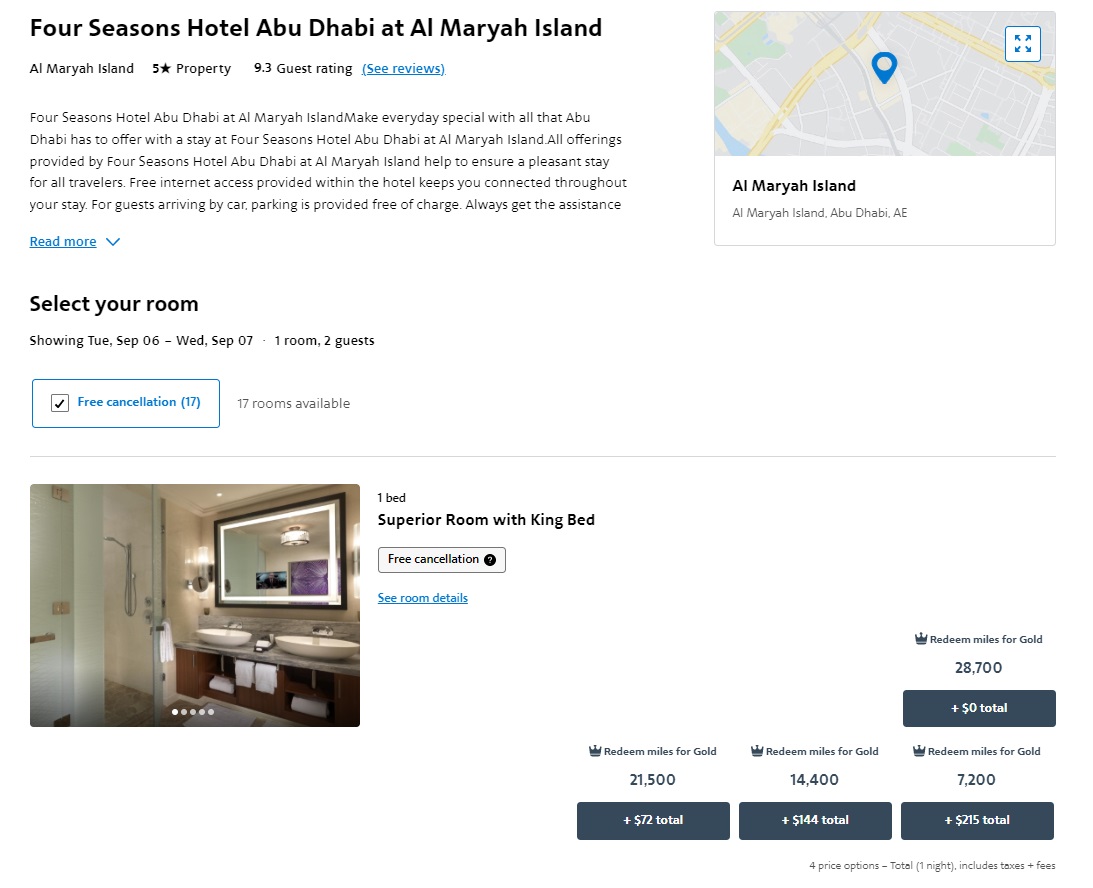 Since American Airlines appears to be including the tax when using miles, I believe that you may come out with a better cent-per-mile ratio in markets with particularly high hotel taxes, though I didn’t test that theory extensively.

Still, the bottom line is that the value can be acceptable for those happy enough with 1c per mile or slightly better.

How does using AA miles for hotels compare to other programs?

As illustrated above, hotel booking through Air Canada Aeroplan was awful by comparison. Unfortunately, so are most other airline mile currencies.

I couldn’t find the Holiday Inn Express in Kuala Lumpur via Southwest Airlines (they offer hotel booking with Rapid Rewards points with their “More Rewards” options), but the Four Seasons above was more than 45,000 points (a bit less than 0.8c per point).

British Airways offers hotel booking at hotelsandcars.ba.com. The same Holiday Inn Express in Kuala Lumpur that could be booked for as few as 4,600 American Airlines miles would cost 8,150 Avios (0.635c per point). The Four Seasons in Abu Dhabi was just shy of 39,000 miles fully nonrefundable or almost 49,000 miles with flexible cancellation (0.733c per mile).

Through LifeMiles hotels, you’d pay 8,600 miles for the Holiday Inn Kuala Lumpur as a general member (or 8,200 miles as a cobranded cardholder or elite member). Either way, that’s a poor value of around 0.6c per mile.

The same pattern held true in every airline program I tried: using airline miles for hotel bookings is almost always a poor deal. That made American Airlines all the more surprising here: even AAdvantage credit card holders, who receive the same discount shown in my “Gold member examples, get around 1c per mile — that’s about 50% more value than most other programs offer.

However, in planning for our 3 Cards 3 Continents challenge, I’ve had to consider every option possible to make sure I don’t leave miles unused or unmaximized. To that end, I was surprised by this revelation: If I wanted to use Capital One miles to erase a one-night stay at the Holiday Inn Express Kuala Lumpur, it would cost me 5,181 miles. However, since I drafted an American Airlines credit card, I could pay just 5,100 American Airlines miles for the same redemption. I (probably) won’t be staying at that Holiday Inn Express and I may not use American Airlines miles for a hotel stay at all, but I found it pretty interesting to see that I could get reasonable-enough value to consider doing it. Since my wife and I acquired a respectable chunk of miles in that SimplyMiles deal last December, I’ll have to keep this option in mind, particularly if our AA Loyalty Games bump me up to Executive Platinum this year and I gain access to even better deals. Hey Nick.
IF you can spare them AND your itinerary works for it, you might consider transferring Amex points to Finnair.
Why? You can use 2000 Finnair miles plus 74.24 Euro to get yourself a hotel voucher for a free weekend night at participating Scandic Hotels.
I haven’t personally done this, but am planning a trip to Norway and stumbled across it. Looks like there’s some potential for good value.

I forgot you had them , but you might also consider using some of those CapOne points instead. I see they transfer to Finnair as well.

Nick, SimplyMiles deal was $.0041, not $.41 per point. I did the math again yesterday because Mastercard has a current donation to cancer(!) that AA cardholders get for $.5 per point & I was comparing – and that got me smiling again about the former deal.

Right, That’s what this post says. 0.41c = $0.0041. I just think it’s easier to talk in fractions of a cent than with the extra decimal places and dollar sign. In the points and miles world, we frequently talk about getting 1.2 cents per point in value or 2.2cpp or whatever the case might be.

Lol. I totally skipped over the “cents” symbol & assumed $. My bad 🙂

I uses AA miles for a Mariott stay fairly recently. Decent value given the cost “bought” from the SimplyMiles deal.

My quick advice (probably should do all the time), stop at the desk and get your final bill. I just checked out and walked, only to find they charged my cc for my entire stay.

I don’t know if they weren’t familiar with this process or what, seems it should be just as easy as any other prepaid stay. It was a headache to get refunded, particularly because when they were supposed to refund, they actually charged me a second time for the stay.