Last Wednesday, we live-streamed the official beginning of the #3Cards3Continents challenge: Drafting the Dream. Greg, Nick and Stephen took turns selecting 3 credit card bonuses with one goal in mind: create an amazing 3-continent dream-trip.  They each started with $1000 to spend on annual fees and travel costs, as well as a total of $15,000 to put towards the minimum spend requirements of the 3 cards that they chose.

The draft was a blast and had plenty of unexpected twists and turns, starting with the first pick and ending with Stephen going back on his pledge to take the Liverpool Cardless card (hopefully no one from home was watching). All three “contestants” amassed a terrific haul of points and miles, and it will be a lot of fun to see the trips that they end up putting together. It’s hard to say who did best.

But that’s exactly what we’re going to do here. Let’s take a look at each 3 card “team,” assess the strengths and weaknesses, second guess suspect picks and applaud particularly stupendous selections. Carrie drew incredible draft-board avatars for each player that we’ll use below, and I took my favorite descriptive reader quote from the live draft chat to use as each player’s name. Instead of letter grades, we’ll determine how tasty each draft was by assigning sandwiches from Zingerman’s Deli, perhaps the greatest culinary treasure of the Frequent Miler’s Ann Arbor stomping grounds. If you’ve never heard of Zingerman’s, it’s worth a trip to Michigan just to try it out (Read Stephen’s post about Zingerman’s here).

On with the rewind… Biggest Strength: Nick prioritized flexibility with his draft. Both the Venture Rewards and the Schwab Platinum are effectively hybrid cards, providing a total of 175,000 points that Nick can either cash out or transfer to partners. This will give him a tremendous array of options for booking both flights and hotels, or when having to deal with any unexpected transport issues.

Biggest Weakness: Hotels, hotels, hotels. Nick’s only options for hotels transfer partners (Choice, Marriott, and Hilton for Membership Rewards and Accor, Wyndham or Choice for C1) or cash. None of them offer much in the way of value. Nick said on this week’s Frequent Miler on the Air that he’s hoping for an Amex transfer bonus to Hilton before the trip starts, enabling him to transfer at higher than the normal 1:2 ratio. The problem is that Hilton is fairly consistent in pricing hotels at around 0.4-0.5 cents per point, meaning that he has to hope for, at minimum, a 40% transfer bonus to make the transfer equal to the 1.1 cent per point Schwab cash redemption (Keep in mind it’s unlikely that he’ll be able to use the Hilton 5th night free benefit, simply because he’ll be on the move).

Best Pick: Getting 80K AA miles for no annual fee (after the statement credit) and only $2K in spend was a great round 3 pickup.

Head-scratching moment: One of the remarkable things about Nick is that he rarely takes the uncomplicated way out if there’s a chance to explore some new or more challenging avenue that might benefit readers. But boy oh boy, passing on that 150K personal Platinum offer with the number one pick was a doozie, especially since he had to eat a $695 fee anyway with the Schwab Platinum. Time will tell if he’ll end up wishing for another 50K MR before all is said and done.

Overall Grade: A particularly good draft that I’m sure will produce a rocking trip. #13, Sherman’s Sure Choice, one of Zingerman’s best sandwiches…if not the absolute best. Biggest Strength: Everything, I guess? Stephen was the beneficiary of Nick’s surprising decision to pass on the Platinum 150K offer…and he gladly accepted. I’m surprised that one person was able to get both the 150K Platinum AND the Ink Business Unlimited (which I thought was one of the stronger cards in the draft because of the combination of 75K plus earning 1.5 on all of the spend). He’s got transferable points, cash and airline miles to burn.

Biggest Weakness: Not much…perhaps hotels? It seems like Stephen is planning on using cash for the majority of his hotel stays. That could get him into trouble if he was travelling domestically, but many countries in the world aren’t experiencing the crazy prices that the US is, and he also has a $200 FHR credit that can be very useful internationally.

Best Pick: Obviously, the 150K Platinum was a leading contender, but reading the room well enough to wait until the 3rd round to grab the Ink Business Unlimited and its 86,000 Ultimate Rewards is what drafting’s all about.

Head-scratching moment: If Greg had grabbed the Ink Business Unlimited before Stephen, I might have said the Aviator Red in pick #2. But Stephen wanted AA miles in order to make his planned trip work and he also knew that the combination of the Platinum and the Ink Business Unlimited would leave him with only $1,500 of spending on a 3rd card (thus eliminating the Aviator Business and the Citi AA cards). Biggest Strength: Greg emerged from the draft in the strongest cash position of anyone with $560, in addition to having the ability to cash out Thank You points at 1 cent per point with the Citi Premier card. He’s also well-sorted on hotels. The Marriott certs and points will get him through almost the entire week and he can fill in any holes with 1-2 Choice transfers from Citi, or by using his substantial cash reserves.

Weaknesses: Greg is probably in the weakest position of the three when it comes to airline transfers. His plan is to use the ANA round-the-world award for most of his air travel. This can be surcharge-heavy, so his cash position is great. But only having 90K Membership Rewards to transfer to ANA will be a significant limit to the total mileage he can travel (ANA prices the RTW award by distance flown) as 90,000 miles is only enough for up to 14,000 flown miles in business class. I have to wonder if he’ll wish he had the Business Gold 130K (which would have given him 22,000 miles of flyable distance on ANA) by the time all is said and done.

Best Pick: Citi Premier in the 2nd round. It’s easy to forget the cash-out flexibility that the Citi Premier has as it’s not talked about as much. But he effectively got the equivalent amount of “hybrid” miles (that he can transfer or cash out) as Nick’s first round pick after factoring in earning from minimum spend (admittedly with Citi’s transfer partners as opposed to Capital One’s)

Head-scratching moment: I think that everyone was surprised to see Greg pull the trigger on the Boundless as his last pick. He had already publicly declared his desire to explore the riches of the Citi-Choice Privileges transfer, so after he picked up the Citi Premier, I was expecting something that would be a boost to his cash or to his potential airline partners. That said, I look forward to seeing Greg make us all lust after what he can do worldwide with those 50K certs.

Overall Grade: #18, the Georgia Reuben. It’s a turkey sandwich, so it may not seem that exciting, but it’s pretty darn tasty. 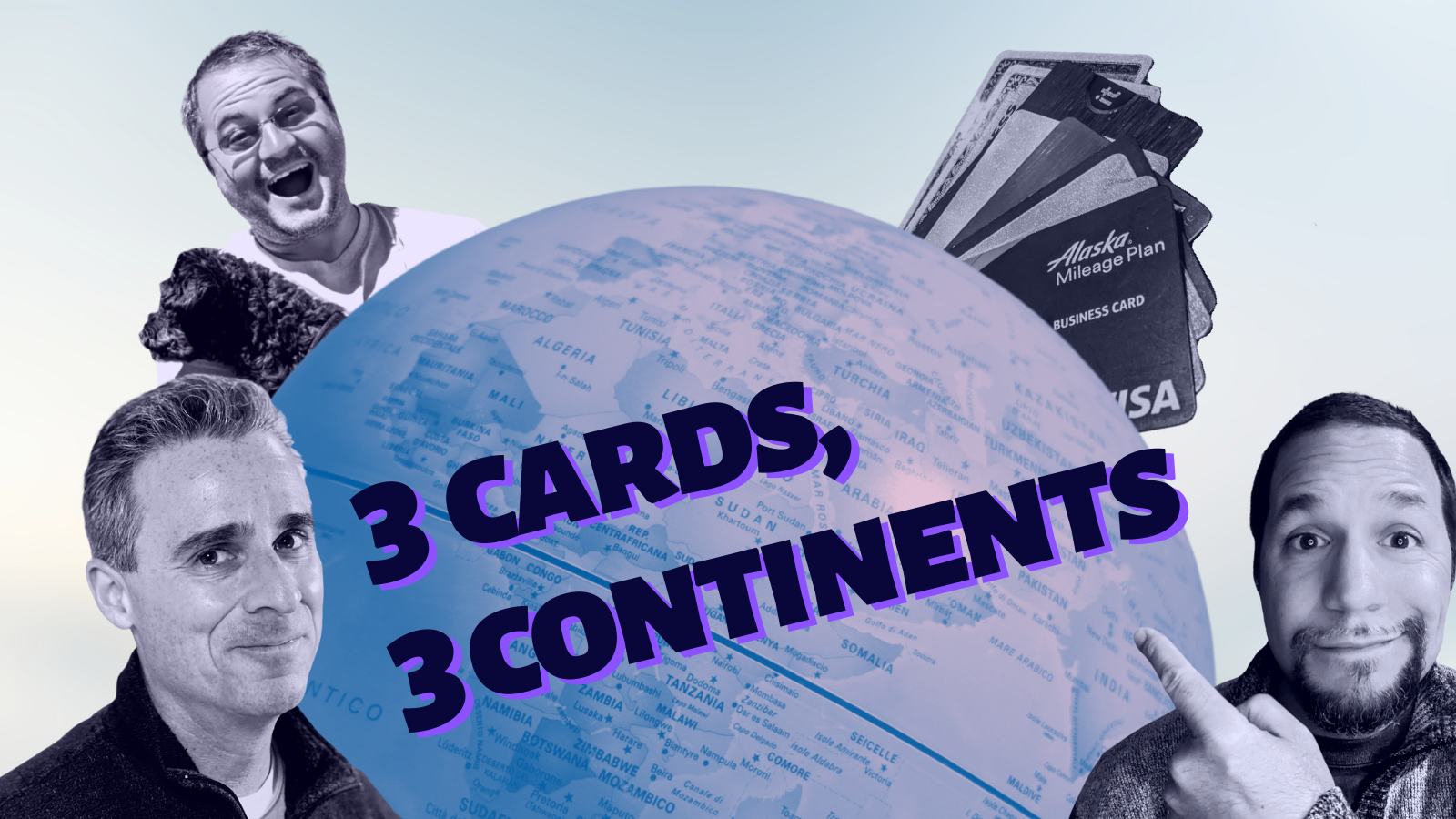 Like most of the live viewers, I think that Stephen came out a pretty clear winner in Drafting the Dream. Through strategy, cunning and grit, he assembled a card lineup for the ages. But having points is only half the battle. Will Stephen be able to turn his draft day momentum into an equally mind-boggling trip? Nick and Greg have plenty of raw material to work with, and this isn’t their first rodeo.

We’re less than three months from departure and award availability isn’t just growing on trees. All three of them will have to be creative and pull out all their travel-hacking chops to win the challenge. My guess is that we’ll have a lot of fun seeing where they go.

Now that the picks are in, who do you think is best set-up for #3Cards3Continents glory? Rolling the dice on Round the World award space

I have the Capital One venture X card. Can I also apply for the Venture card as well?

Tim
I don’t like SW GC’s but their easy to Give..I love their points can u use their GC to buy points which are Good 4ever unlike canceled cash tickets (12 months).

Watched live, and while I love Stephen’s picks, I think Greg is set the best. Using “ground” transfers for the ANA RTW he can use Citi or cash to shave miles off the distance, so he’s probably fine there. And his hotel stays will be very good with 50K points in Asia, Africa, or the Middle East (and in some great slightly less popular European cities).

Nick should be fine, and I think he has at least 1 “wow” up his sleeve. But I won’t bet against Greg.

For next time I’d like to see you guys do a competition like this where the cards are random or someone chooses them for you.

Good Idea Tony Drop all of them in the Trick Bag and see What Happens . If u can get out of a Mess that’s the person u Hire..That day is coming real soon..V Bernie

About Nick’s options for hotels, he can do Venture’s transfer partners (Wyndham, Choice), too.

Absolutely correct. Wyndham isn’t a great value from a transfer perspective and doesn’t seem like that’s an option that Nick is looking to take advantage of, but I added it in for clarity’s sake (Choice is a transfer partner for both MR and C1). I also added Accor (which is a 2:1 transfer partner with C1).

Beth B
Reply to  Tim Steinke

Tim, isn’t it Radisson not Choice for Amex?

It’s funny, I actually said that during the “draftcast,” but then this morning realized that, for some reason, Amex was displaying UK transfer partners on my account page (maybe it was confusing me with Stephen Pepper!). It’s Radisson in the UK, Choice in the US.

After watching the draft and reading some of the posts, I am really looking forward to the rest of this challenge. It is really interesting to look at points and miles from the perspective of 1) here is the trip I want to do and 2) what cards can I get to fund that trip. I have always looked at it as finding points first and later looking for ways to use them.