One of the best deals in travel is ANA’s Star Alliance Round the World award.  We previously covered this award here: Around the world in business class for 115K [Sweet spot spotlight].  More recently, I wrote about my initial planning for an expected-to-be-awesome Round the World trip.  In response, many readers offered up useful tips.  In this post, I’ll summarize the tips that apply to booking ANA’s Round the World awards (leaving out tips specific to my journey). ANA’s Round the World Pricing and Rules

Before getting to our reader-inspired tips, here are the basic rules for booking these awards as found on ANA’s website:

Some backtracking is possible

A reader named Will backed this up with additional observations:

Their backtracking rule seems to be applied by the agents, and it’s very broad. It’s basically that you can’t cross from one of the IATA-defined “Areas” like Europe, then into Asia, and then back to Europe. Other than that, you have a lot of flexibility. I believe IATA calls them TC1, TC2, TC3.

And this is from a reader known as AS:

You can definitely deviate and backtrack if you need to. I talked to a rep and he explained it this way. If you’re going from the US to Australia, then that’s hard to find award space so you will probably need to go to Asia first and then route to Australia from there. The rep told me they know this and don’t have a problem with it. I think the spirit of the rule is they don’t want you zig-zagging all over the place, but within zones there is flexibility. I traveled SIN-PER and I was traveling west, so I definitely backtracked.

Despite a reader named Bill telling us that you can place the award on hold for 3 days, I and other readers have been told that no holds are allowed.  This is really unfortunate because transfers from Amex Membership Rewards to ANA often take a couple of days to complete.  By then, the award space you found could be gone.

Assuming you’re booking a business class Round the World award, it’s often the case that a flight you want will have economy rather than business class award seats available.  Will tells us that you can gamble that business class will open up later: book the trip with that segment in economy class and later bump up the segment to business class when space opens up. ANA won’t charge any additional miles, but might charge additional taxes and fees if applicable.

This tip also applies to first class Round the World awards: you can book segments in economy or business class with the hopes of later upgrading to first class.

Award availability may not match expectations

Reader L M points out that it’s very helpful to have alternate options ready to go when speaking with an ANA agent:

Still had phantom inventory display, so it really helped to have back up dates/flight options to propose to the ANA rep. when booking the itinerary. They’ll also be able to check inventory for options in that case, but the process is much smoother for coming in with your own alternatives.

Multiple readers suggested that it was better to fly westward around the world rather than east.  Presumably this is because people believe that there’s less jet lag when flying west (and there seems to be some scientific evidence for this).  There’s a downside to this, though: eastbound flights are faster…

If you prefer to minimize flying time rather than jetlag, then it makes the most sense to go east.  Eastbound flights take advantage of the jet stream whereas westbound flights fight against it.

United’s non-stop route between Tokyo (ANA) and Newark (EWR) is a good example.  Above, you can see that the westbound flight is scheduled for 13 hours 45 minutes whereas the eastbound flight is scheduled for only 12 hours 15 minutes.  If all else was equal, you would cut an hour and a half off your in-flight schedule by flying this route eastward.

Start or end in Hawaii (maybe)

The question I have is whether ANA will count flying between Hawaii and the South Pacific or Asia as crossing the Pacific ocean (which is a requirement for Round the World awards).

Use the Star Alliance Round the World Tool Star Alliance offers a Round the World planner (found here).  It is intended for piecing together a paid Round the World trip, but it is also useful for finding flight options and identifying fees (taxes, fuel surcharges, etc.) that would be imposed on an award. 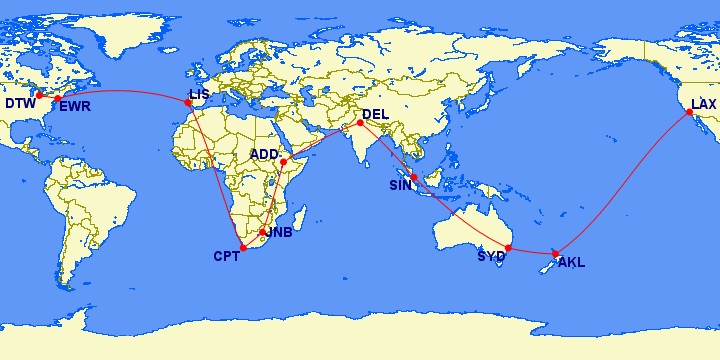 That said, Great Circle Mapper is a great tool for getting the ballpark distance measurements.

If the line is dropped or if you need to call back for whatever reason, you have a higher chance of speaking with the person you spoke to, or the person who you believe has the best service attitude… I was looking through my phone’s contact list and found numbers for ANA Hong Kong (+852 2810 7100) and Singapore (+65 6323 4333).

Fly airlines with low (or no) fuel surcharges

This one comes directly from Nick’s original post about ANA’s Round the World award.  Even though the mileage price for these awards is extremely low compared to alternatives, the cash component can be extreme if you fly segments on airlines that charge outlandish fuel surcharges.

Star Alliance airlines with no fuel surcharges (on most routes)

Star Alliance airlines with low fuel surcharges (on most routes) My Round the World business class adventure (exploring hacks, and testing limits)