I’ll be honest, stepping into a points and miles game with Greg the Frequent Miler and Nick Reyes feels a little like playing Tom Brady and Patrick Mahomes…at the same time (if you don’t follow American Football, let’s just say it’s daunting).  How could this average Midwestern dude keep up with two titans of the industry, guys who earn 500,000 Membership Rewards for buying a car and use miles to hang out with Richard Branson on his private island without breaking a sweat?

I’m already a One World Emerald and do almost all of my domestic travel via Alaska, so I wasn’t terribly interested in the status in and of itself.  I fully expected this first reveal to be a post of shame, to be the token “well, he gave it a shot” guy on the FM totem pole. But, you know what they say: “you can take the gamer out of the game, but you can’t take the game out of the gamer.”  Or something like that.

The results of the first two months are in and surprisingly: 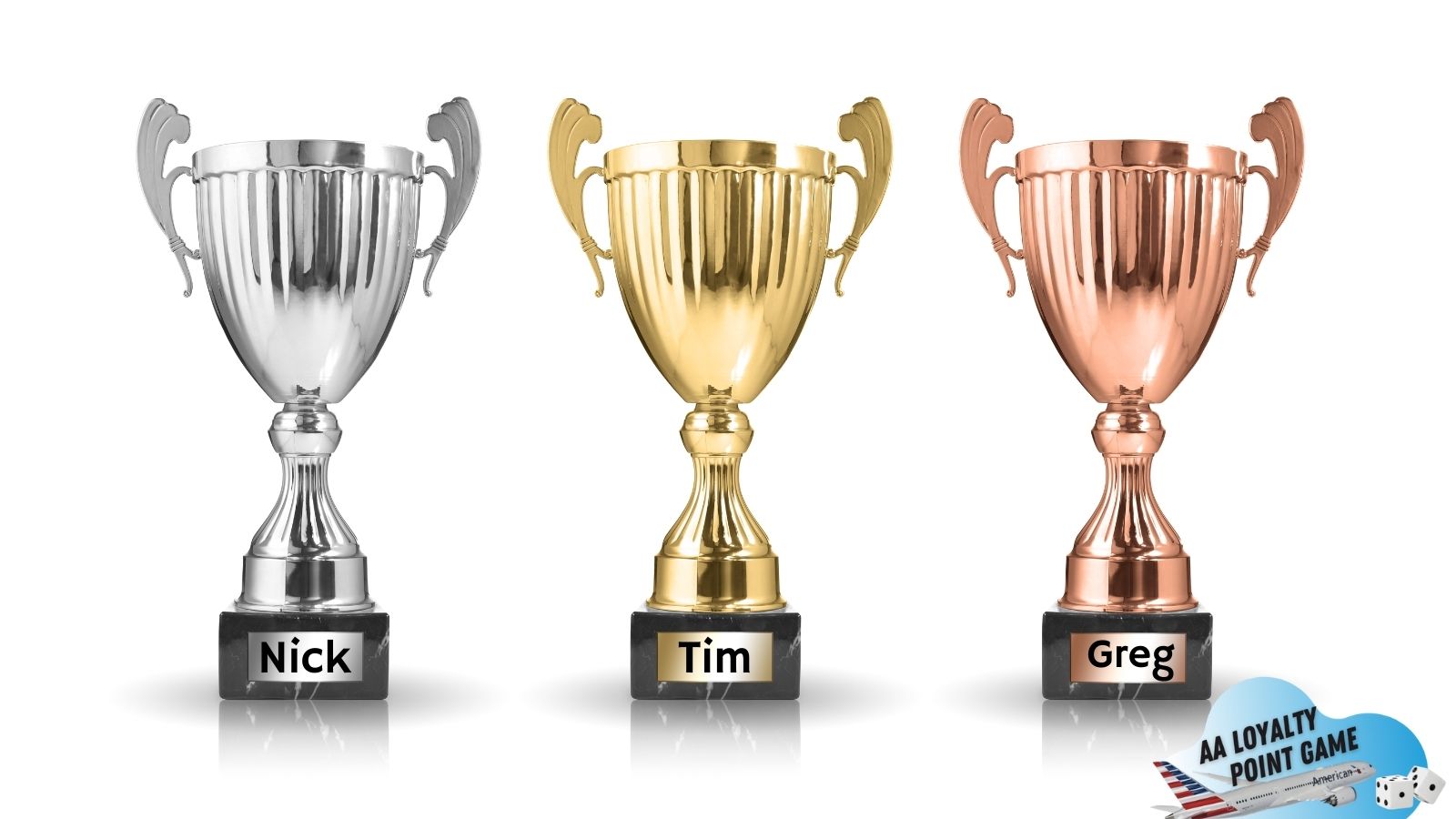 If you’re interested in earning American Airlines elite status without flying (or wondering why others are interested), these posts will help:

I’m also feeling very good about my Cost Per Point (CPP).  When figuring out my “excess cost” on a deal, my basic formula is:

I try to be pretty ruthless with the “what I would have paid for the deal” metric: $3 per bottle of wine including shipping, $4 per meal for meal kits.  It’s what would be such a good deal that it would be a no-brainer to try it.  The one exception is giftcards.com, where I just factored in the 2.2% cashback missed, activation/liquidation of Visa Gift cards and shipping as excess cost.

Using this formula (which some will disagree with), my current average cost per point/mile is .38 cents.  The Byte deal helped this out a ton as it was profitable before even considering miles gained. I’d be a buyer of AA miles at .38 CPP, without even considering Loyalty Points, so getting the combination is the extra gravy on the potatoes.

I consider myself extremely lucky, as all of deals that I signed-up for tracked appropriately and earned both Loyalty Points and redeemable miles (*rubs rabbit’s foot*).  Here’s a full list:

Deals to be determined

You can find details about most of the above deals in our cheat sheet.

It might be beginner’s luck, or maybe I’m a little too fond of wine deals. Regardless, it’s on like Donkey Kong and the competition’s only going to get more intense moving forward.  Greg won’t be workcationing in California every month (I think?) and Nick is stockpiling old cell phones and SIM cards so that he’s fresh and ready for the next round of Verizon deals.

My goal is to average about 10,000 points a month to account for foibles along the way and give me some extra time. That’s not a heavy lift and I feel confident that Platinum Pro is in my future.  But I can feel the AA-shaped target on my back…can I continue to keep pace with Nick and Greg?  Stay tuned… I’m late to the game, considering I just started playing today. & While I should have earned nearly 10,000 LP just today (which is crazy), I also have a hard time seeing how you’ve been able to accumulate so many point so fast! So impressive. It’s kinda fun & totally overwhelming all at the same time.

You’re pretty lucky that both BrightCellars and Laithwaites tracked for you. Neither tracked for me and there are several additional DPs on FlyerTalk that both of those services are potentially playing some games with their affiliate marketing.

That’s a bummer, I’m sorry! How quickly did you cancel?

Tim, how hard is it to cancel the wine subscription programs like winc etc? I like wine, but not that much 🙂

There were all easy for me. Check out this post for details on each deal.

Congrats, Tim! So you were able to stack the Motley Fool promos even though they said no stacking?

So far, so good! I haven’t actually heard of any clawbacks from this round of MF yet, but they could still be coming…

Ideally I would buy one Visa card from Giftcards.com for $2000 to pay toward Income Taxes but seems the most I can put on one card is $250? Is there any way to pool the balances of 4 separate cards together so I make 1 IRS payment?

Don’t have a AA card currently. Hopefully 3X once a month. Cheers!!

Why does the AA Barclaycard give an extra 2,000?

I have an AA Barclaycard Silver. Under the old terms $1 spend in general items = $1 Mile.

And according to AA you find that for Every Base mile you earn you get you get 1 Loyalty Point.

Conversely, other folks here may choose not to take that that extra 24,000 miles or additional 24,000 LP’s, and instead will take a cash back deal from a credit card company of their choosing.

Why: extrapolating out, and assuming that there is a 3x deal every month yet to come from giftcards.com, that means that if I do nothing else but buy $2000 worth of gift cards / month, that will put me at 179K LP’s for the year. Add another yet pending 10K LP from Barclaycard (as I met their required spend and earned a 15K LP bonus) and then I’m at 189K… let’s call it 190K.

Which means that I likely won’t take advantage of a 3x giftcards.com offer EVERY month… as I do need to take flights of at least 30 segments total to ensure that I get my EP benefits.

And yet, however, that becomes a problem: What happens if folks who get their status through spend suddenly overwhelm the program?

It used to be hard to become an AA EP, as you really did need to have butt-in-seat time. People who flew primarily domestically (like me) would have to do a LOT of flying. Looking for 4 segment RT flights (rather than direct) or cross-country routings to earn the EQM’s and EQD’s … those who flew primarily internationally, easier, but you still had to do it and be in a plane.

Now this changes the game completely.

Thanks so much, @Zebraitis for the detailed write-up! Which card(s) in particular are you getting off of Giftcards.com that are easily able to be liquidated (I hear GCs are difficult to cash out these days). I live in Portland, OR, and last I checked, getting money orders with GCs isn’t easy around here.

I can only write about what I know… so I will say this:

1) the Visa cards that you receive have the Visa logo and say [DEBIT]… however their terms are that it can be used like a credit card (without pin).

2) However, if you do want a PIN, then you can get one online assigned. there is a process.

3) So, I suggest if your plan is to cash back out via money orders, you check if the money order issuing place prefers Credit or Debit. (I am guessing Debit, as that assumes that cash is there vs a loan… companies get freaky about giving you cash when you take out a cash advance to do so against a credit card).

4) I had not planned on cashing out, as I know there are plenty of expenses (groceries, Amazon purchases, gas, etc.) where that will come in useful.

I’ll start worrying if I end up having a lot of extra cards laying around, but since Costco runs seem to be $500 a pop, it shouldn’t be to tough to find a way to spend it.

“I suggest if your plan is to cash back out via money orders, you check if the money order issuing place prefers Credit … ”

That place which accepts credit is across the street from the unicorn farrier.

I got the $2K in the form of Mastercard virtual. I BELIEVE that these look like MC debit cards AND then you can ADD them to SimplyMiles and also potentailly pay for other items on AA shopping portal.. Is this a backdoor stack approach???