Chase has sent a letter to Marriott and Ritz-Carlton credit card holders advising us of a minor change coming to the wat status is earned through spend: Platinum elite status spending will be based on calendar year spend rather than cardmember year spend moving forward, though you won’t be penalized if you’re in the midst of calendar year spend right now. Here is the letter that Chase has sent to Marriott cardholders (Greg received his letters over the weekend on the Marriott Bonvoy Premier Plus Business credit card and Ritz-Carlton card and mine came today): This probably won’t be very consequential for most since spending $75K on a Ritz-Carlton or Chase Marriott Business credit card generally isn’t a good deal unless you are primarily spending at Marriott properties. Even then it may not always be the best option.

However, one of the card’s benefits for those customers who use credit card spend to earn elite status, the card has traditionally offered Platinum elite for spending $75,000 during your cardmember year.

Starting in 2022, Marriott cardholders with eligible cards will be able to earn Platinum status by spending $75K in the calendar year from January 1, 2022 through December 31, 2022.

Obviously some people are in the middle of meeting cardmember-year spend — they may have already been spending toward status with the intention to complete their $75K spend before 2022 anniversary date. The good news is that those folks won’t be penalized: you can earn 2023 Platinum status either by meeting the spending requirement from your anniversary date in 2021 to your anniversary date in 2022 or by spending $75K from 1/1/22 to 12/31/22. Starting on January 1, 2023 all cardmembers will need to qualify based on calendar-year spend.

To be clear, this means that if your anniversary date was September 1, 2021 and you have already spent $25K on your card, you will need to spend another $50K before September 1, 2022 in order to have Platinum status for 2023. If you have no spend yet, you could alternatively wait and complete $75K spend between January 1 and December 31, 2022. Either way, you get Platinum status through the end of 2023. Starting in 2023, if you want Platinum status for 2024, you’ll need to meet the spend based on calendar year.

Again, spending so much on a Marriott credit card generally isn’t advisable, but I know there are some readers who do it so it is worth knowing about the change. 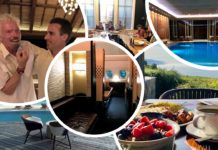 @Nick Reyes Kinda off topic but do you think once Marriott completes gutting their program that they’ll go to 3x unbonused points per dollar on their cards? This would simply be returning to the way the spg cards were. Secondly, if this does happen do you think air mile transfers will be devalued? Finally, thoughts on the leaked Chase Ink Premier??? Gotta love the rumormill.

Not hard now to get to 50 nights with them: 15 for a personal card and another 15 for the business card. Of course use your two certificates, and then just 18 nights, paid or points, to reach 50 and platinum. That’s the recipe for lifetime platinum for me. More than halfway there.

Odd what they refer to the card as in the letter…

Ah, I looked at the letter quickly and Greg had sent me two screenshots. Now realizing this is a change for all Marriott cards that allow you to spend towards status. I’ll update the post shortly.

Oh good, I didn’t need yet another indication that I was gong nuts. Couldn’t figure out what the letter was talking about with the name and the 35K spend to Gold.