I was wrong.  In my recent post announcing that Chase has added Air Canada Aeroplan as a new transfer partner, I wrote “Often you’ll find Air Canada’s award pricing to be much cheaper than United’s, especially for long distance premium cabin awards.”  It turns out that “often” was a very poor choice of words. So, now that cardholders of premium Ultimate Rewards cards (Sapphire Preferred, Sapphire Reserve, Ink Business Preferred) can transfer points to either United or Air Canada, which should they choose?

In order to see which program offers better award pricing for U.S. customers, I ran a number of award searches across both United MileagePlus and Air Canada Aeroplan and I recorded the results.  Here’s what I found…

I looked at a number of one-way routes within the U.S. and recorded economy award prices.  I would have liked to have also recorded domestic first class award prices, but United so rarely makes these available at the saver level that it was difficult to find enough data points.  Note that United’s award pricing is dynamic and so real world results will vary.

* With the flight from Dallas to Chicago, United charged 2,000 more miles, but Air Canada charged $31 more in fees.  If we assume that you value Chase points at about 1.5 cents each, then the value of the difference in price in miles ($30) almost exactly matches the difference in fees ($31).

As you can see above, United is almost always the better option for domestic U.S. flights.

I looked at one-way flights from Chicago to a number of international destinations and recorded award pricing on United and Air Canada.  Here’s what I found…

* With the flight to Dubai, United charged 1,800 more miles, but Air Canada charged $31 more in fees.  If we assume that you value Chase points at about 1.5 cents each, then the value of the difference in price in miles ($27) nearly matches the difference in fees ($31).

United is clearly the better choice for international economy awards.

I’ll admit I didn’t spend much time looking at international first class awards because award availability can be hard to find.  That said, I did manage to pull up Chicago to Frankfurt in Lufthansa first class and Chicago to Tokyo in ANA first class.  In both cases, Air Canada is cheaper.

There are factors beyond the award price that are worth considering:

I thought I would find that Air Canada Aeroplan points were usually better than United’s, but the opposite proved true.  For economy awards, I found that United was almost always the better option.  For international business class awards, though, the results were split: sometimes Air Canada was better and sometimes United was better.  And for international first class awards I found that Air Canada was better (but I only compared two routes).

So, which is a better transfer partner from Chase?  There’s no single answer.  My recommendation is to do award searches in both programs before transferring from Chase Ultimate Rewards.  Transfer to whichever one offers the best combination of price and other features (such as waived award change fees).  I realize now that the answer will often be United. 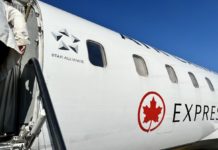 Is your opinion any different now that Chase has an Aeroplan card?

I think the taxes and fees are a bit off for first class awards. LH would be the only bookable star alliance first class award option from Europe-US. The direct flights are populating with $132 for UA and $213 for AC. Maybe the $5.60 and $37 are for UA or AC metal but neither operate first class.

No, I listed the fees that were shown on each website for flying Lufthansa first from US to Germany. Fees might be higher in the other direction.

[…] I transfer my Chase Ultimate Rewards point one to one to United and Hyatt. Sometimes to Southwest and only if I have a specific award in mind that makes sense flying Southwest. But maybe I will have another option going forward to replace United? United vs. Air Canada: Which is the better Chase transfer partner? […]

[…] United Vs Aeroplan:  Now that you can transfer Ultimate Rewards points to Aeroplan, it’s important to know whether United or Aeroplan is your better option for booking Star Alliance award flights.  Here’s a great breakdown. […]

Expiration policies on the miles also is a consideration for me. Aeroplan miles expire after 18 months without account activity, whereas United eliminated expiration on miles.

Not to mention that if you get stuck on Air Canada Rouge, you might as well go on Spirit (if they ever fly again)…

“I don’t have enough experience with Air Canada’s customer service to make a call here, but if you prefer one or the other, that can be an important factor when booking awards.”

Obviously these kinds of stories are very YMMV, and you can find horror stories with any airline, but I can share why I personally will never fly Air Canada ever again.

Back in 2016, I booked an award flight on Air Canada using United Miles from Orlando to Shanghai. Because I was going onward from Shanghai to Hong Kong in less than 7 days, I didn’t need a Chinese Visa thanks to China’s 144 TWOV rule. Unfortunately, Air Canada’s ground staff in Orlando were completely unfamiliar with Chinese TWOV rules and denied me boarding; and they were incredibly rude, condescending, and absolutely 0 help when I tried to explain.

Because it was a United award flight, I walked over to United at Orlando and was immediately connected with a manager who completely understood the issue and explained that they often have these kinds of issues with Air Canada ground staff. The United manager was incredibly friendly and helpful (a huge relief after literally being yelled at by Air Canada staff) and rebooked me on the next United flight from Orlando to Shanghai and even gave me a complimentary upgrade without even telling me he was doing that. Unfortunately, by that time, the next United flight from Orlando to Shanghai was the next day so I effectively lost more than 24 hours in Shanghai thanks to Air Canada’s screw up.

After the trip, I contacted both United and Air Canada about what happened. I explicitly asked only Air Canada for compensation. United customer service gave me some miles back even though I didn’t ask for anything from them. Air Canada refused to do anything more than send me a 10% off paid flight coupon code valid for one year – as though I would pay to fly on Air Canada ever again!

Again, YMMV, but based on my experience, I will never fly Air Canada again.

I would say that one advantage not mentioned here for obvious reasons(article about Chase transfer partners) is that you can get Aeroplan miles from other transferrable points currencies.

I recently was booking an economy flight from the Dominican Republic to Chicago and it was 17,500 on United and 12,500 on Aeroplan. Yes there’s the extra booking fee, but I had Aeroplan miles on hand I wanted to spend so was willing to make that trade off. So definitely consider Aeroplan for flights to the Caribbean.

Overall through Aeroplan is not that great. I wish you guys hadn’t fawned all over it when it relaunched (ie devalued).

There will be so many changes ahead as the world adjusts living with Covid. And when the pandemic is declared over (more the end of messing with our lives…because it will be endemic) the devaluations will resemble a tsunami.

I am now setting my crystal ball down…

Couple things about AC though, is (1) they definitely have better award fares to Canadian cities like Toronto and Montreal, which have easy connections to a lot of U.S. cities, and (2) AC’s “open jaw” flight rules are best-in-class. TPG has much to say on this.

You put Aeroplan customer service as an unknown. Well FYI it’s pretty bad. CSRs often make up their own rules and their hold times are ridiculous with no callback function. Additionally Air Canada is trying to fight the US regulations for refunds. https://www.cbc.ca/news/business/air-canada-refunds-u-s-1.6066398#:~:text=The%20U.S.%20Department%20of%20Transportation,to%20challenge%20the%20proposed%20fine.

This is an interesting data point. I wonder how it would hold up for airports that aren’t United hubs. I really don’t think you can say anything was “proved true” by just looking at ORD flights in a completely dynamic pricing structure.

I was pricing some business awards from Houston to Europe and could not find any cases where Aéroplan was cheaper. Maybe this was a function of the awards I was searching and the time frame. I think the distance aspect of Aeroplan pricing was the big culprit.

Thanks for this article Greg. I saw your article and got excited about being able to transfer my Ultimate Reward points to AC. But after research on AC’s website, I came to the same conclusion as you. I am a 1K and usually fly UA or Star Alliance partners for my flights to Mumbai in business class. I have heard everyone praise AC over UA so was surprised that not only was AC more expensive to Mumbai but also had more stops from my airport in the SE USA.

I had Chase/MCUnited card within 5 years i had 3 different cards due to they where compromised, not sure if its Chase security or MC. I WOULD NOT ADVISE ANY CHASE/ MC.

Hmmmmm
I booked NCE>ORD by United cheaper by $80 then Singapore same FLT. by a partner airline too… Look at what ur Doing Never Been Hacked and Love Chase..BLM

With dynamic award pricing these days, comparison solely based on saver awards is no longer appropriate. Both of these airlines seem to purporsedly price most of their award tickets at prices just above the saver levels, making these redemptions unavailable to their partners. The bottom line is that accumulation of miles in the frequent-flyer’s program of one alliance member is not a good strategy.

rick b
Reply to  Tony

I was about to post this, and to add, United has been very bad about jacking up partner awards, especially in premium cabins. We’ll see in the long run if Aeroplan has lower prices in most cases.

Air Canada tells you more clearly when an award is mixed cabin which flights are impacted and even gives you a breakdown of the percentage in each class of service. ‍♀️