I wanted to put out a quick tip because there is currently a deal to get 10x points on the PointCard debit card for purchases at T-Mobile, Verizon, and AT&T. That’s effectively 10% back. I didn’t think of it when I originally posted about this deal, but it occurred to me that there is a way to max this one out without giving up credit card cell phone insurance: paying down an Equipment Installment Plan, which can be done separately from paying toward the bill (at least on T-Mobile), is also triggering 10x points for me and I think it is a way to keep cell phone insurance protection while maxing out this debit card offer. For years, we paid our cell phone bill with the Chase Ink Business Preferred for 3x points and cell phone insurance, (many others prefer to self-insure and use the Chase Ink Cash for 5x Ultimate Rewards points). However, after making a claim with Chase and finding that the $100 deductible made the insurance of very limited use, I was less interested in Chase’s insurance.

Any way you slice it, paying the phone bill with the PointCard means forgoing credit card cell phone insurance, which usually requires that you pay the entire previous month’s bill with your credit card. My bill recently generated and I could pay the full bill for this month and pay ahead for next month using my PointCard to knock the offer out the 10x offer for one of us, but then I give up Amex Platinum cell phone protection.

However, I realized that there might be a better option. As I am sure is the case for many readers, I have several devices that are on equipment installment plans with T-Mobile (thanks to promotions, almost all of them are free after monthly bill credits, so for example I get “charged” $30 a month and get a credit of $30 a month). I just recently added two new lines in the current Buy One, Get One Free sale on additional lines. I didn’t need new devices, but since I could get two new One Plus 9 Pro phones for free with new lines after bill credits, I added those two devices intending to sell them. The installment plans on those are basically $30 a month for 24 months and I get a monthly bill credit of $30 each month as long as I keep the lines open, making them net “free” as long as I maintain T-Mobile service (and I will because I’m getting a great deal with a lot of free lines on Magenta Max).

Before I sell the new phones, I intended to pay those phones off because I believe T-Mobile will unlock them after they are paid off.

In the past, I was surprised when I paid off an Equipment Installment Plan on a device with my Ink Plus card and I did not receive 5x Chase Ultimate Rewards points for that device payment (I have always earned 5x on service payments). Therefore, I wasn’t sure whether payments toward EIPs would trigger 10x from the PointCard. I happened to have a device on my account that on which I only owed an additional $10.42 (it still has 3 monthly ~$15 bill credits to go. I confirmed with T-Mobile that paying the device off would not end my bill credits and I made a payment for $10.42. Sure enough, the transaction immediately showed up with 10x points on my PointCard. I’ll therefore max out the rest of this promotion making payments on the two new One Plus 9 phones I just added to my plan in order to get the full $50 back in points on my PointCard and my wife’s PointCard (each phone has a balance of $700 owed, so I can basically pay $500 toward each with my point card and my wife’s PointCard and pocket an extra $100). Because my payment is toward the EIP rather than toward the phone bill, I don’t think it will reduce the amount my bill shows that I owe — the entire bill will still get charged to my credit card. Long-term, T-Mobile confirmed that I’ll continue getting the monthly bill credits even after the new phones are paid off (they noted that you do need to wait to pay the phones off in full until after you’ve received the first bill credit to ensure that you maintain the bull credits for the rest of the 24-month period).

It’s worth recognizing that this means I will sacrifice some rewards long-term since my net monthly bill will be less. Originally, these phones would have cost me $30 and received a monthly $30 statement credit. Once I pay them off completely, I will continue receiving the monthly $30 EIP credit but I won’t be charged $30 for the device — so the amount I owe for my phone service will be reduced. That shouldn’t affect my cell phone coverage, but it basically means I get rewards on $30 less spend every month (times two). Since I’m only earning 1x (as noted above, I’m using the Business Platinum because I prefer its insurance and the $10 monthly credit mostly makes up for not earning more rewards), that’s not a significant sacrifice to me.

I know that this tip only applies to those with the PointCard who haven’t yet maxed out the offer and also have phones on installment plans, but I figured that is probably not such a small subset of readers and since I hadn’t thought of it previously I figured that this may help someone max out the promotion without sacrificing insurance. 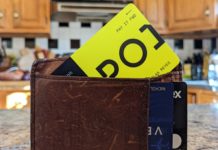 There soon will be no Point (Debit Card) anymore does this apply to xfinity mobile bill payments?

Point Debit Card offers some cell insurance…”Phone insurance provides coverage when you charge your monthly phone bill to PointCard and in the event your phone is stolen or damaged (inc. cracked screens), up to $600 per incident, $50 deductible per loss. A maximum of $1,000 per 12 months.”