Virgin Atlantic points are super easy to get.  For example, you can sign up for the Virgin Atlantic credit card (which often has a 65K welcome bonus) and then average more than 2 cents per dollar on spend with that card.  Also, points transfer 1 to 1 from most major transferable points programs.  Even better, transfer bonuses are common such that transfers to Virgin Atlantic are often better than 1 to 1.  With all of those points easily accessible, the question is what to do with them…

Thanks to Chase offering a transfer bonus to Virgin Atlantic through 6/15/22, I figured that this was a good time to update this post.  Since this was last published, I added a few sweet spots, and marked two as expired. 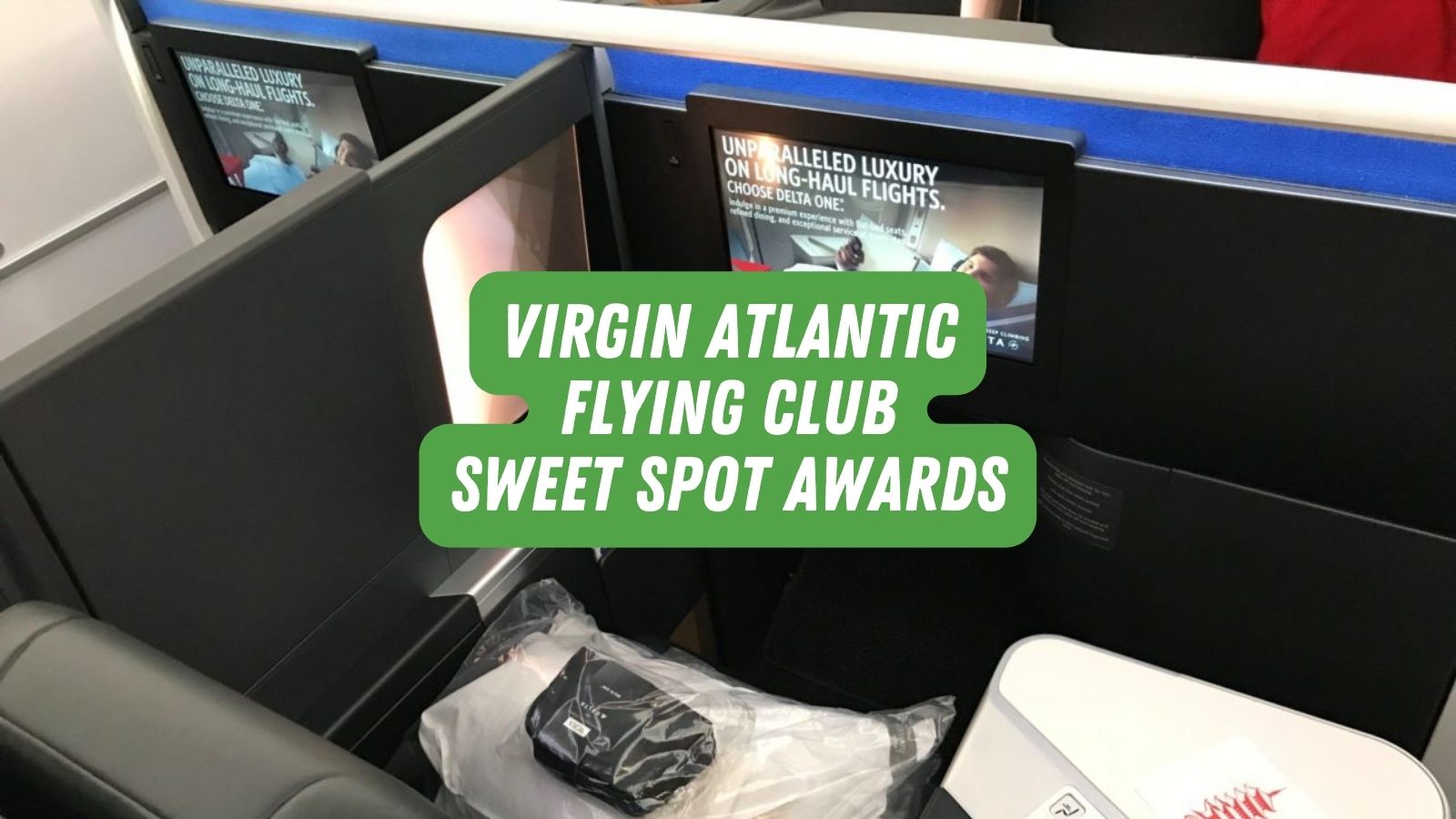 Virgin Atlantic points can be transferred from most common transferable points programs:

And, here are the expired bonuses (may be useful for predicting when to expect a new bonus):

One awesome recent development is that you can now book one-way awards for half the price shown above.  Virgin Atlantic’s ANA partner page states: “One-way trips are permitted at half of the round-trip mileage shown below.”

Some of these round-trip flights (such as between JFK and Tokyo, as shown above) often sell for over $20,000 but can be had for 120,000 points or less!  Compared to the cash price you can easily get 16.67 cents per point value! US to Europe (Delta One Business Class) Use Virgin Atlantic miles to book Delta One business class from the United States to Europe for only 50,000 points one way.  This is for all routes other than to/from the UK.  Unfortunately, flights to/from the UK include extremely high award fees.

The trick to optimizing this award is to begin your journey in the United States.  If you book a one-way flight from the US to Europe you’ll pay only $5.60 in fees:

With a round-trip flight originating in the US, you’ll pay a reasonable amount in fees (fees will vary depending upon the European airport you return from).

If you book your flight departing from Europe, though, fees will be far higher:

FlightConnections shows that Delta flies from the US to these European airports: If you want to go to airports other than those shown above, you can do that too.  Book a mixed partner award where you fly Delta across the Atlantic to either Paris or Amsterdam and then fly onward on Air France or KLM to wherever you really want to go.  Full details can be found here: New sweet spot — Virgin Atlantic mixed-partner award to Europe Use Virgin Atlantic points to book Air France Premium Economy from North America to France for as few as 24,000 points one way (plus fees, as shown below).  The best pricing is from “East Coast North America & Caribbean,” but that includes states as far west as Wisconsin, Illinois, Tennessee, and Mississippi.

Here are the award prices and fees for Premium Economy to/from Europe: US to London (Economy Class) As shown in the images below, when flying from the US to London, you can expect to pay about $150 in fees when flying Virgin Atlantic or ~$225 when flying Delta: How to book: book online at Virgin Atlantic.

As you can see above, for Air France or KLM flights under 600 miles, Virgin Atlantic charges only 4K points (off-peak) or 4.5K points (peak) for economy, or 8K or 9K points for business class.  That’s awesome.

More details can be found here: Air France & KLM across Europe for less.

Virgin Atlantic offers a distance based award chart for Delta flights (except those between the US and Europe).  This means that short, non-stop Delta flights can be booked cheaply. As you can see above, one-way flights start at only 7,500 points one-way.  On some routes, this can be a huge bargain compared to booking with Delta miles.  Usually the best deals are found on the shortest flights, but even long flights can be much cheaper when booked with Virgin Atlantic miles.  For example, for Delta’s crazy-long flight from Atlanta to Johannesburg South Africa, Delta wants a minimum of 60,000 points one-way:

If the same flight was available to partners, Virgin Atlantic would charge only 45,000 points for for the same economy ticket. This is just a specific example of decent deals for non-stop Delta flights.  Delta’s flights between the U.S. west coast and Hawaii are less than 3,000 miles and so they price out at only 15,000 points one-way.

Sadly, Necker Island Destination Weeks are no longer bookable with Virgin Atlantic miles.  However, I’ve kept the description of the award here in case they ever decide to bring back this option…

This is the ultimate splurge.  Sir Richard Branson (founder of Virgin businesses) lives and works on his private island named Necker Island.  Each year he designated around 8 weeks as “Celebration Weeks”.  During Celebration Weeks, guests can book the all-inclusive week for 2 adults starting at $35,000 (details here).  Alternatively, those with lots of Virgin Atlantic points can book the same week for 1.5 million points.  While that’s a crazy number of points, it amounts to an excellent 2.33 cents per point value compared to the cash rate.  Note that you have to have Virgin Atlantic Silver or Gold status to book this award.  That said, it’s fairly easy to get that status through credit card spend alone. Note: At the time of this writing, South African Airways is no longer flying between the US and Africa.  If/when that changes, I’ll remove this deal from the “expired” list.

Virgin Atlantic charges only 150K round-trip or 75K points one-way for South African Airways business class non-stop flights between South Africa and the US.  Note that award space is notoriously difficult to find. Delta Award Sale: Fly Delta One To Europe For 148,000 SkyMiles Round Trip

Fly NYC-Oslo From Only $227 Round-Trip On Air France

ANA first class is a unicorn heard about it but never seen available to book.

Should clarify that ANA only has The Suite from JFK-HND, other US routes have the older first class.

Not true, ANA the Suite has been consistently available NRT/HND to LAX from January to April.

Is there any way to check Air New Zealand availability besides calling Virgin?

Yes, you can try to find availability through United or Air Canada award search. If either of them can find Air Ne Zealand flights, then they should also be available to Virgin.

Very helpful article! I’m sitting on a lot of VS points that I plan to use over time for ANA first from West coast to Japan (which btw, they just started using their updated cabins for I learned on a flight in late March). But I’ll have to try out a few of these options.

FYI, I think this language is mixed up for the mileage:

Think it would be good to highlight if/where there are better options to redeem on the same flights. For example, while Virgin to Europe on AF/KLM or within Europe on the same airlines could be a sweet spot for redeeming Virgin points, redeeming on AF/KLM directly is often an even sweeter spot. Biz on AF/KLM to anywhere in Europe is regularly as low as 55k one way from the US east coast

Can Virgin points be used for Delta from US to S. America? Thanks.

Yep. You can book any Delta flight as long as Delta has released partner award space (which is unfortunately rare).

We booked SEA-AMS with Virgin miles (last year) on Delta One for March , but now can’t get in, so are trying to reschedule for later this year. I seriously can NOT find even one seat any week from now through October (even using Expert Flyer). Is there any trick to finding space since they made their change?

Hey Jana, I had almost the exact same trip booked last year and had to rebook. I spent weeks looking and I was able to find SEA-AMS on Delta One Suites in late April but couldn’t find anything on the return. I have to fly Virgin on the return and pay the exorbitant fuel charges otherwise the trip wasn’t going to happen.

This also works in reverse (from Europe to the US)

Incidentally, other airports west of the line where they charge more points also have lower fees, but only for business class. MSP seems to be special.

Anyone finding Delta One awards space to Europe? I’m glad that VA affirmed this sweet spot, but it would be sweeter if it actually existed.

I can’t find jack (trying to reschedule a flight).

Haven’t seen anything BOS-CDG in quite some time

Yes, Delta’s partner award space to Europe has almost completely dried up. I found a few here and there in April and May, but not much else. I don’t think this has anything to do with Virgin though

I remember reading somewhere that first class ANA flights can now be booked as.one way for half if the stated roundtrip price. Is this correct?

I don’t think so. However, you can do an open-jaw: https://www.godsavethepoints.com/virgin-ana-first-class-open-jaw-120k/

The fee listed for Air France is incorrect. Economy on Air France from US to Paris will cost you $160 in fee while Business will be $295.

Thanks! I’ve updated that section. The fees I listed were from actual results when the ability to book Air France online first appeared on Virgin Atlantic’s website. I wonder if exchange rate changes caused the fees to get higher or if they simply changed them?